INDIANAPOLIS — Simone Biles, the most decorated gymnast in history, is renowned for performing moves so difficult, and so distinctive, that several have been named after her.

On Saturday, she executed a new one considered so dangerous that no other women even attempt it.

Her latest signature skill is called a Yurchenko double pike. Biles attempted it in competition for the first time on Saturday night at the U.S. Classic, her first competition in 18 months.

Biles had unveiled the vault, a stunning feat of power, physics and fearlessness, a day earlier, in a video from a practice that quickly went viral.

The Yurchenko double pike is considered so perilous and challenging that no other woman has attempted it in competition, and it is unlikely that any woman in the world is even training to give it a try. To execute it, a gymnast first must launch herself into a roundoff back handspring onto the vaulting table, and then propel herself high enough to give herself time to flip twice in a pike position (body folded, legs straight) before landing on her feet.

It’s the kind of maneuver done much more easily by a platform diver who has the help of gravity and the safety of a soft landing. Biles, though, executes it by producing enough speed and strength to power herself high in the air and then flip so quickly on the way down that gravity seems to have been taken by surprise. Others were too.

Not even the vault’s namesake, the former Russian gymnast Natalia Yurchenko, tried it in competition. (The double pike carries Yurkchenko’s name because she pioneered the roundoff-back-handspring approach to the vault, not what Biles now can do after pressing off it.)

Biles performed the vault so well on Saturday that her one flaw, somehow, was over-rotating it. That meant she needed to take a few steps back on her landing to stop her momentum.

Still, when Biles landed, it sent the small crowd at the Indiana Convention Center into a frenzy.

The judges scoring her, however, were not so impressed. Despite the move’s difficulty, they gave it a provisional scoring value of 6.6, close to what Biles’s other vaults have received. That limited the points available for performing it successfully, a point that a frustrated Biles suggested was unfair to her.

“I feel like now we just have to get what we get because there’s no point in putting up a fight because they’re not going to reward it,” she said of judges and, ultimately, the International Gymnastics Federation, which has the final word on starting values for new vaults done in competition. “So we just have to take it and be quiet.” 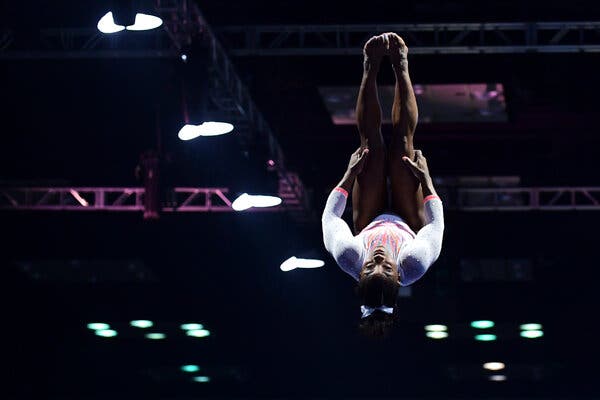 Biles is the only woman who even attempts the Yurchenko double pike in competition.Credit…Emilee Chinn/Getty Images

Biles said Saturday that the gymnastics federation had similarly given her double-twisting, double-back beam dismount a start value that was too low, and that she expects it to undervalue her Yurchenko double pike when it is reviewed.

United States women’s national team coordinator Tom Forster agreed with Biles that a 6.6 was not high enough given the vault’s difficulty. “It doesn’t seem to be consistent with what they’ve done with other vault values,” he said, “and I don’t know why they do that.”

Part of the reason for that might be a concern for the safety of gymnasts not nearly as skilled as Biles — by assigning a dangerous move a low start value, the federation quietly discourages others from risking it. But there also may be a fear that Biles is so good that she might run away with any competition she enters simply by doing a handful of moves that her rivals cannot, or dare not, attempt.

“They’re both too low and they even know it,” Biles said of the rewards for her beam dismount and the double-pike vault. “But they don’t want the field to be too far apart. And that’s just something that’s on them. That’s not on me.

“They had an open-ended code of points and now they’re mad that people are too far ahead and excelling.”

Despite not being properly rewarded, Biles, the defending Olympic champion in the all-around, said she would continue doing them.

When asked why, she quickly answered, “Because I can.”

Rhinestones subtly reinforce a label many have already given Biles: Greatest Of All Time.Credit…Emilee Chinn/Getty Images