The United States Gymnastics Championships concluded over the weekend, and few could have been surprised that Simone Biles dominated the competition.

Despite a few uncharacteristic mistakes on Friday that she chalked up to an abundance of power and adrenaline, Biles, 24, coasted to her record seventh U.S. title on Sunday night in Fort Worth, Tex. Biles won three of the four events on Sunday, and did so even while leaving some of her best tricks — including a vault so technically advanced that other gymnasts won’t even attempt it — in reserve.

“It’s really emotional, especially going into my second time doing an Olympic run, it’s really crazy,” said Biles, who has won every all-around competition she has entered since 2013.

Here’s what the event revealed about Biles, the other top gymnasts and the Olympics that begin in just over six weeks. 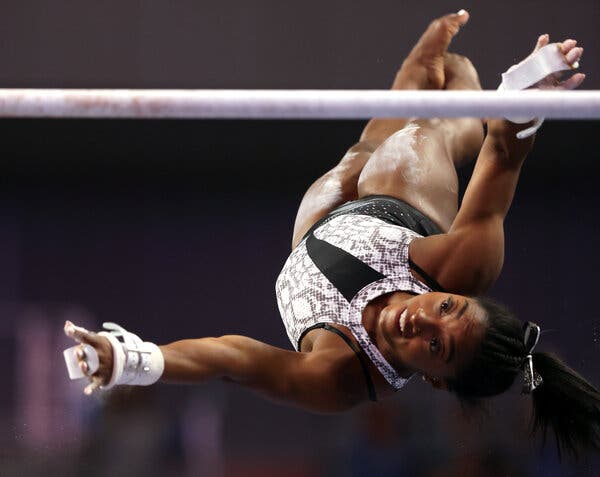 Biles on the uneven bars, the only event she didn’t win on Sunday in Fort Worth.Credit…Jamie Squire/Getty Images

Biles is still the best gymnast in the world.

Biles has dominated world gymnastics for eight years. But because she and every other gymnast has been mostly idle during the pandemic, there were always going to be questions about how she would perform back on the big stage.

Biles left no doubt at the U.S. Championships, winning the overall title by a comfortable 4.7-point margin. She won three of the four events and was third in the bars.

Biles performed better on the second day of the meet than she had on Saturday, another good sign. On Day 1, she stepped out of bounds three times during the floor exercise. On Day 2, she did so only once.

“It’s so crazy because in training I never go out of bounds, and I never have this much power,” Biles told reporters. “But with the adrenaline, that’s where it comes.”

Biles could be even better at the Olympics.

Missing from Biles’s routine was the Yurchenko double pike vault that dazzled at the U.S. Classic last month. In that move, Biles starts with a back handspring then flips twice in a pike position before landing. It is so technically difficult — and thus potentially dangerous — that no other woman has even attempted it in competition.

Instead, Biles performed two vaults that are more routine, at least for her, called the Cheng and the Amanar. It is expected that she will bring back the Yurchenko double pike at the Games.

Biles won four of a possible six gold medals in Rio, losing only on bars and beam. It’s not unthinkable that she will better that performance in Tokyo.

Sunisa Lee was the rare gymnast not named Biles to hold the crowd’s attention.Credit…Tony Gutierrez/Associated Press

Even before the U.S. trials, the team is taking shape.

Sunisa Lee and Jordan Chiles placed second and third at the U.S. Championships, well ahead of the rest of the field (but still almost five full points behind Biles in a sport that measures scores to the hundredths of a point). Lee and Chiles both look to be strong contenders for the five-woman United States Olympic squad. Despite a lingering ankle injury, Lee won the bars on Sunday, making her the only gymnast to finish ahead of Biles in something.

The top two finishers at the United States Olympic trials, which will be held June 24 to 27, will get automatic spots at the Games, but USA Gymnastics has discretion in picking the rest of the team. It is now hard to see a scenario, barring injury, in which Lee and Chiles would be excluded.

Jade Carey, who placed sixth at Nationals, had already clinched a spot as an individual competitor in Tokyo, although not a spot on the five-woman U.S. team.

Jordan Chiles, a training partner of Biles, moved closer to an Olympic spot with her performance.Credit…Tony Gutierrez/Associated Press

Some familiar names may not qualify for Tokyo.

After the Championships, 18 gymnasts were named to the U.S. national team and earned spots at the trials. But some familiar athletes did not. Laurie Hernandez, 20, part of the 2016 team, injured herself during warm-ups and did not compete. Chellsie Memmel, a 2008 team member, a mother of two who is trying a comeback at age 32, stopped halfway through a bars routine after losing her grip and did not compete in the floor exercise. Morgan Hurd, 19, a former world all-around champion, entered only two events and performed poorly.

All Strikeouts and No Walks