Less than two weeks after they became partners in a superleague project that would have cast aside the structures and organizations that have underpinned European soccer for a century, a group of the sport’s biggest clubs are now engaged in another pitched battle behind the scenes.

This time, their fight is with one another.

At the heart of the new battle are two letters: one renouncing the project, a short-lived Super League, and recommitting the teams to Europe’s existing system, and another threatening any club that walks away.

European soccer’s governing body, UEFA, is demanding that the league’s founding clubs sign the first letter, which would complete the formal demise of the Super League and begin the smooth of repairing the clubs’ broken relationship with European soccer. Eight of the teams already have agreed to do so.

But three of the 12 Super League founders — Real Madrid, Juventus and Barcelona — are refusing to let the project die. Doubling down in a letter of their own, they are threatening to pursue legal action against their former partners to extract millions of dollars in penalties if any teams follow through on plans to withdraw from the league.

The Super League, announced by its 12 founding teams in a late-night news release on April 18, collapsed 48 hours later amid a popular and political backlash. In the days and weeks since that humiliating retreat, club presidents and owners have held emergency meetings with leaders of soccer in their own countries and with UEFA to try to limit any punishment they might face for being part of a breakaway that would have devastated the value of leagues and clubs across Europe.

UEFA has said it will treat repentant clubs more kindly than those that refuse to back down. Those that refuse, it has warned, risk the most severe penalty available: a two-year ban from the Champions League. 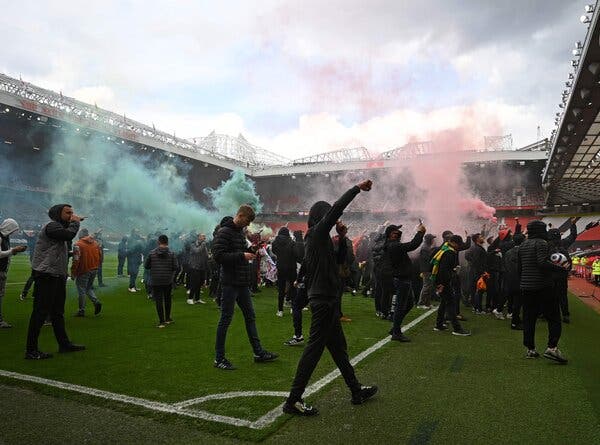 Fans angry with the owners of Manchester United invaded the team’s stadium on Sunday, forcing the postponement of a Premier League game against Liverpool.Credit…Oli Scarff/Agence France-Presse — Getty Images

Documents, messages and conversations with executives involved in the talks suggest that eight teams of the 12 original Super League members have agreed to sign a declaration legally distancing themselves from the breakaway competition, one short of the number required to force through the liquidation of a company set up in Spain to run it.

The three holdout clubs, though, are warning others of severe legal and financial consequences if they break the commitments they made when they signed up.

The dispute is an indication of just how badly and how quickly relations between the top teams have soured, and underscores how even after its demise the Super League continues to tear at the fabric of European soccer.

A majority of the breakaway teams have told UEFA they will sign on to a letter confirming their intent to walk away. But in a draft of the letter, which was reviewed by The New York Times, they point out that if all 12 teams do not come to an agreement, efforts to revive the competition may be outside their control.

UEFA shall “promptly receive” details of what formal measures each club has taken to break free of its obligations, the letter says.

Despite the popular backlash to the project, opinions have hardened among the three clubs — Real Madrid, Juventus and Barcelona — that were most committed backers of the project. They have vowed to press ahead with legal action to prove soccer’s current rules are incompatible with competition and free trade laws.

In their letter, sent on Thursday, the clubs accused the teams that have publicly declared their intention to leave the Super League with committing a “material breach” of the founders agreement. Amplifying that damage by signing a declaration pledging their allegiance to UEFA would open them to significant damages, the letter warns.

The Super League started to wobble even before the formal announcement of its creation. Within a day, some of teams started to make private entreaties to UEFA, acknowledging that agreeing to join had been a mistake.

Less than 48 hours after the league was launched, Manchester City became the first team to officially announce its intention to withdraw. That started a cascade, with all six Premier League teams releasing public statements revealing their plans to withdraw.

The defections left teams in Spain and Italy acknowledging the league was no longer viable in its original form, but not formally declaring they would not try to revive it.

Two weeks later, as many as eight teams had told UEFA they were committed to walking away from the Super League project, and ninth, A.C. Milan, was on the verge of making the same decision. According to the Super League contract, the withdrawal of nine clubs can force the liquidation of the entity that was created to run the competition. That dissolution is one of UEFA’s requirements to put the entire chapter to rest for the clubs involved.

The breakaway attempts continue to roil soccer on a domestic level, too. In Italy, the national association has introduced new regulations aimed at preventing any new breakaway attempts, while in England discussions are taking place over similar rule changes and also about how to punish teams whose actions threatened the interests of the Premier League.

The Premier League is expected to announce the result of its consultation within days. One plan involves securing long-term commitments from member clubs not to join any unsanctioned competition, or to withdraw from the domestic competition, with severe penalties — including fines of more than $50 million — if they do.

Finding a suitable punishment is proving difficult, however. Soccer’s leaders are aware that the collapse of the Super League owed much to the public opposition of fans of the English teams that had agreed to join it; punishing the teams in ways that do not anger those same fans is now the goal.

That means clubs are unlikely to be hit with sporting sanctions, but rather with financial penalties aimed at the owners that backed the Super League plan. For now, one tangible response has been ostracism: Officials from the six breakaway clubs have been removed from the league’s internal committees.

W.N.B.A. Preview: Don’t Bet Against the Aces in the West