Imagine, for a second, how different the N.B.A.’s second-round Eastern Conference playoff series would be if, say, Giannis Antetokounmpo had Bogdan Bogdanovic spreading the court and opening space for him.

Or where would the Atlanta Hawks be in their resurgence without the sharpshooting skills of Bogdanovic?

The Milwaukee Bucks jumped a bit early during free agency in trying to secure Bogdanovic in a sign-and-trade-deal from the Sacramento Kings, after Bogdanovic was already frustrated over the Kings’ dismissal of their general manager, Vlade Divac.

The rules-breaking act cost Milwaukee the deal for Bogdanovic, and a future second-round draft pick. Bogdanovic, a restricted free agent, ended up signing an offer sheet from Atlanta that Sacramento did not match. The turn of events became part of a significant overhaul that paid quick dividends for the Hawks.

A bout with the coronavirus limited Bogdanovic before the season, and a knee injury forced him to miss 25 games. But his return coincided with the Hawks’ decision to elevate Nate McMillan to interim head coach from his assistant role and the team resuscitating its season by winning eight straight games. Bogdanovic has averaged 16.4 points per game in the Hawks’ playoff series against the Knicks and Philadelphia 76ers, matching his regular-season figure.

Now, the fifth-seeded Hawks are improbably even at 2-2 with the 76ers, the No. 1 seed, in the best-of-seven East semifinals.

Bogdanovic, 28, recently spoke to The New York Times about his exit from the Kings, his bond with his teammate Trae Young and how he became a fan of Kobe Bryant. His responses have been edited for length and clarity. 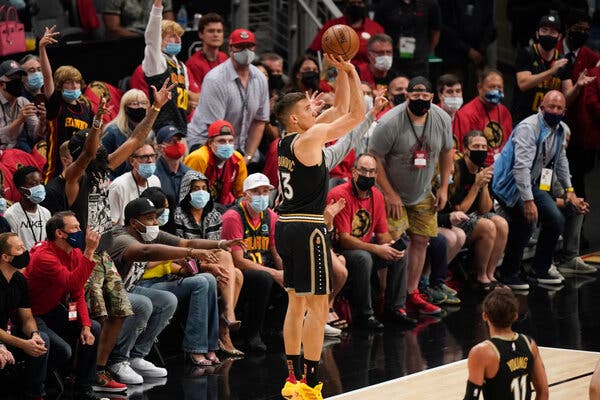 Bogdanovic is averaging 16.4 points per game during the playoffs, consistent with his regular-season production.Credit…Brynn Anderson/Associated Press

What was your perception of the Hawks before you signed your deal in Atlanta?

Before everything started, before free agency, before everything, I had the conversation with the Kings and I wanted to stay, because I liked the culture and stuff and I was good with teammates. I feel like they liked to play with me. And I feel like we built something over there.

But then, when they fired Vlade on my way back to Serbia, because there was an exit meeting and I’m talking with everyone, everything looks fine and I’m like, “I’m not even thinking about moving out.”

So now, I’m not saying I’m there because of Vlade, but at the exit meeting, you hear something and then boom, no one says nothing and the changes are going.

And I said already, “Something is going on.” But I got the call from the owner and he told me, “Hey, we still want to keep the team, but maybe we just need to change something, just so the players feel like a new staff, new beginning, blah, blah, blah.”

But then, I got traded. I was in Serbia. I was working out. I didn’t talk with anyone during the summer and I talked only with my guys from the Kings and my teammates. And I didn’t know what’s going to happen and the Kings traded me overnight. And from that point, I decide, when they wanted to trade me I was like, “OK, they don’t want me there.” Like, “Why I’m even thinking about it?”

So, I just wanted to leave and find the best situation for me and my family that I can go to the next level.

And I said, “The Hawks were the perfect fit for me.”

In the past, you’ve said that you were afraid of losing your competitiveness after losing a lot in Sacramento.

Was that something that you did lose and then found this season again?

No, I feel like I didn’t lose it, but I just didn’t have enough credit for it because I wasn’t winning. Because if you’re making the winning plays in a losing team and you’re still losing, that’s not a winning place. Even if I think like, “OK, that play, it doesn’t have to be a scoring play”— there is a lot of things on the court that you can influence the game to win the game.

And I feel like that’s something that the regular people, they cannot see, the fans cannot see. But when you’re not winning, you’re losing the credit for it.

One of the most difficult things to do in the N.B.A. is to develop a winning culture. How did the Hawks accomplish one midseason?

When you’re losing, you see that very often in the league, everyone is become more selfish and they don’t care about others. And that’s what players do, trying to save their job.

When you’re winning, everyone is willing to sacrifice.

It seems like you and Trae Young developed a quick connection.

I’m a competitor and he’s competitor, simple as that. He wants to win. He wants to work, first of all, and he knows in his life, everything he got wasn’t easy. He has to prove it every single time he has to do it. He has to work for it, and I feel the same way in my story. So, I feel like it’s easy to communicate with a guy like that.

Bogdanovic silences the crowd in Philadelphia during Game 1 of the Eastern Conference semifinals.Credit…Tim Nwachukwu/Getty Images

What was going through your mind when you held up your finger to quiet the Philadelphia crowd during Game 1?

I missed a couple of shots, they were louder and louder and I made that one. It just went out of me. It’s just momentum. It’s natural, and I feel like it’s fun as well.

How do these playoff environments compare to those in Europe?

I feel like the culture here is fans follow the players, the superstars and individuals. In Europe, because of the so many countries, so many different cultures, they’re more team-oriented and they’re more team-sensed.

Growing up, why did you choose basketball above other sports?

The 2002 World Cup, everyone was talking about it, kids in school. We were shooting 3s and repeating Peja Stojakovic or some big names of Serbian basketball.

And hopefully, we have now kids that they can do the same thing with our last names. And it feels good to be in that position.

Were you able to watch those Kings-Lakers series with Divac and Stojakovic back in the early 2000s when you were growing up?

Yeah, that was huge. I remember Dallas was a tough match for Kings all the time in the playoffs and Lakers of course. I couldn’t catch the whole series because the TV rights and all that, but whenever the game was on the TV, we would watch. I think most of the games when the Kings had the home-court advantage, they had that broadcast in Serbia. I was so young. I was 10 years old, 9 years old.

But aren’t you a Kobe Bryant fan? How did you reconcile rooting for the Kings when the Lakers had Bryant?

I became Kobe fan when he dropped that 81 points. That was something crazy, something impossible.

So, since then I started following that guy and I liked his passion. And then a couple of years later, he won a championship then he won it again. So I was like, “Damn, this guy’s really, really good.”

What does it mean for Serbian basketball that Nikola Jokic won the Most Valuable Player Award?

It will take a while for him to understand what he became this year. That M.V.P. award is something that I can compare with the gold medal that our Serbian team won with the national team back then when we had our idols like Peja Stojakovic, Vlade Divac, Sasha Djordjevic.

So, I feel like he can be for sure, one of the kids’ idols there and he can be the next generation motivator for the kids in Serbia. It means a lot. He is the first ever and he still has a lot of game.