I found an immersive performance — really, a spectacle — at a place I never would have expected it: a basketball game.

Since February, the Brooklynettes, the Brooklyn Nets dance team, have been a pandemic anomaly: They have been performing live, at games, for nearly 2,000 spectators. It’s not the same as it ever was — it’s better. Barclays Center, at reduced capacity, is more intimate. The ushers treat you like you’re a guest at a dinner party. The players come into sharper focus. And the dancers, whether performing their choreographed routines or reacting to an exciting shot, are vital to the whole.

It used to seem that a Brooklynettes number had three characteristics: speed, power and hair. The strokes were broad. Were the dancers skilled and meticulous? Absolutely. But at the games, their hard work was obscured by the noise and the abundance of fans. The reality was that this wasn’t so much a dance team as a group of backup dancers for a basketball team. 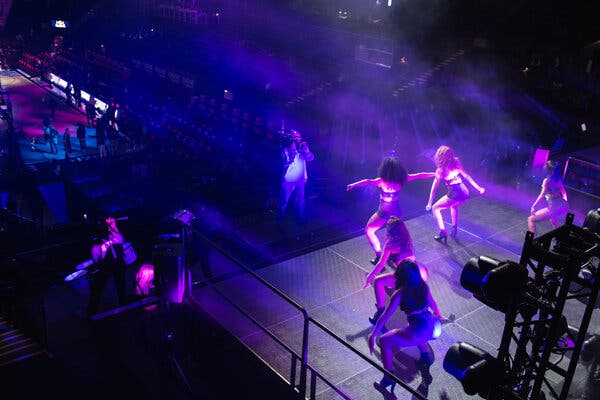 With the arena at reduced capacity, the Brooklynettes feel more vital to the whole.Credit…Kholood Eid for The New York Times

This season though, while the Brooklynettes focus is still hip-hop and street jazz, the look is different, more precise. At a recent rehearsal in the arena, Asha Singh, the Brooklynettes coach and sometime choreographer, put the brakes on the dancers, to clean up a routine. “What angle of left are we going?” she asked them. “Are we going to the corner? Are we stepping side?”

Why would a position held for a millisecond during a sprint of a dance matter? When these six bodies move as one, they pull you in — not just to their dancing but into the arena, where their movement creates an invisible line of energy between the players and the fans.

Even when they aren’t dancing, that vitality continues as they stand, hands on hips, looking like cutouts of Wonder Woman. It sounds strange, but now for the Brooklynettes, a position held for a millisecond in a sprint of a dance does matter, because whether or not you see the effect, you feel it.

The Brooklynettes — along with a galvanizing drum line and Team Hype, a male dance crew that performs on the opposite stage — are no longer a decorative afterthought. In prepandemic days, they would perform right on the court; nowtwostages have been built to provide the necessary social distancing from fans and players. The dancers — there are six per game now, down from 20 — are present throughout. They stand out in a way that they didn’t before, even when they were front and center performing on-court routines during home games.

Asha Singh, the coach of the Brooklynettes, rehearsing with the team. Back, from left, Celine, Kia and Ashley.Credit…Kholood Eid for The New York Times

And while there is reduced capacity at Barclays Center, the numbers are still staggering for dance. How many dancers do you know who are performing indoors for so many people? (The arena has been at 10 percent capacity, about 1,700 spectators, and will go up to 30 percent on May 19.)

“It’s invigorating,” said the dancer Liv David, who added that for many months during the pandemic, “I was just dancing in my little apartment trying not to kick my cats in the face and trying to make the most of it. I almost had forgotten that feeling — that adrenaline.”

Live indoor dance performances have been hard to come by in New York; when they do happen, audiences are kept small. The Works & Process series at the Guggenheim Museum started with audiences of 50; as state mandates changed, the number was increased to 75 and now tops out at 90. At the cavernous Drill Hall at the Park Avenue Armory, capacity for “Afterwardsness,” a coming production by the Bill T. Jones/Arnie Zane Company, will be 118.

The drum line and dancers during a game.Credit…Kholood Eid for The New York Times

During the 2019-2020 N.B.A. season, when arenas were at full capacity, all 30 teams featured performances with dancing. Now, in addition to the Brooklynettes, there are 10 other dance teams performing live. (The Knicks City Dancers do not; instead, recordings of past performances are played during games.)

When fans were allowed back into arenas, Criscia Long, who oversees the Brooklynettes, the Brooklyn Nets Beats Drumline and Team Hype, was charged with figuring out how to bring entertainment back.

“We’re in the crowd now — we’re right next to the fans,” Long said. “You get to engage with them; you get to actually feel their energy a little bit more during performances and when the ball is in play. It’s so much more connected now than even having the whole entire crowd there.”

An experienced dancer, Long was formerly a captain of the Knicks City Dancers; she also performed with Lil’ Kim, who appeared in a number with the Brooklynettes this season. “She really wanted to be a part of the show,” Long said. “She rehearsed with us, and you know how hard it is with Covid protocols, but she wanted to be in it. It felt like we were on tour with her.”

The Brooklynettes backstage in April.Credit…Kholood Eid for The New York Times

That was a special occasion. Even so, Singh said that if you took away the basketball team, what the Brooklynettes present is a version of tour-style concert performances. That is even more apparent now. “Very much tour, minus the artist in front,” she said. “Imagine all that crazy dope dancing that you would see around the artist: That’s kind of the energy that we like to provide the arena.”

In the past, the Brooklynettes would sometimes share the court with Team Hype for combined routines. Now, though, the two groups perform on stages at opposite sides of the arena; during the games, they play off each other while members of the drum line appear with both groups.

They’re all more in the moment. At times, the dancers react to a big play: short bursts of choreography that bloom quickly and disappear. Even those dances, unannounced yet galvanizing, draw attention. As David said: “I feel eyes on us. I feel like people are appreciating what we’re doing and performing for them. And that is very rewarding.”

At the start of the pandemic, Singh moved into Zoom rehearsals, like most of the dance world, and found that she needed to focus less on fixing details like exact arm placement and timing — that would be attended to once they were onstage — and more on getting the choreography in their bodies. Dancers would record themselves and send her the videos for individual notes.

The emphasis of the movement has also changed. “Before, we would do a lot of big arms,” Singh said. “It was like how do I make the steps as big as possible? How do I make my body look like it’s taking up space?”

While they still do that, now, she added, “It’s more about the power behind the movement and less of ‘my arm has to be way up here’ for the upper-level fans to be able to see what we’re doing.”

As always, Singh wants the Brooklynettes to look like “an elevated professional dance crew based in Brooklyn,” she said. “My approach to anything, all Brooklynettes is you’ve got to do it right. At least try to do it right. The last thing I want anyone to say — and especially in our industry — is, ‘Oh it’s inauthentic. They’re appropriating culture. Or they’re not really Brooklyn.’”

Asha Singh, the team’s coach, wants the Brooklynettes to look like “an elevated professional dance crew based in Brooklyn.” Credit…Kholood Eid for The New York Times

As for that Wonder Woman pose? “That’s literally our signature,” Singh said, laughing. “I told the ladies the other night, ‘You have to stand like you’re still performing and stay there.’ If your arms get tired, you can relax, but then always come back so it still looks like your body is energized and you’re present. If you’re not backstage, you’re performing. That’s always been my viewpoint — on any show.”

It’s another instance of the Brooklynettes doing something that they never had to do. “Now we’re learning that we have to change — we have to tweak our show, the in-between moments,” Singh said. “It’s kind of exciting though because I’m a fan of a stage. I just love lights. I love haze. I love being elevated.”

As for that stage in the stands? “It just looks so much more like a show to me,” she said. “So I’m kind of loving our stage moment. We’re not sure how long it’s going to last, but it’s been really fun so far.”