The Toronto Blue Jays will finally end their extended stay in Florida, returning to a familiar place up north this summer.

No, not Rogers Centre in Toronto, but Sahlen Field in Buffalo, their home stadium during the pandemic-shortened 2020 season.

After playing the first two months of the 2021 season at their spring training facility in Dunedin, Fla., the Blue Jays announced on Wednesday that on June 1 they will shift home bases, as had been expected, to Buffalo, the home of their Class AAA affiliate.

“The club’s goal has always been to return to play on home soil as soon as it is safe to do so, and until then, the team will play its home games at Sahlen Field,” the team said in a statement.

With new daily coronavirus cases and Covid-19 deaths still relatively high in the province of Ontario, and the Canada-U.S. border remaining closed for nonessential travel, the Blue Jays did not have the option of returning to Toronto. The heat and humidity in Florida will only get worse in the summer months, which played a role in the team’s decision.

To accommodate the Blue Jays, the Buffalo Bisons are playing their minor league season, which began on Tuesday, in Trenton, N.J. The Buffalo stadium, which underwent renovations before last season, was further upgraded to allow for fans to return to the stands this summer. The Blue Jays said that, in accordance with local and state guidelines, they would operate at 24 percent capacity, or about 4,000 people. In Dunedin, they have been limited to just over 1,500. 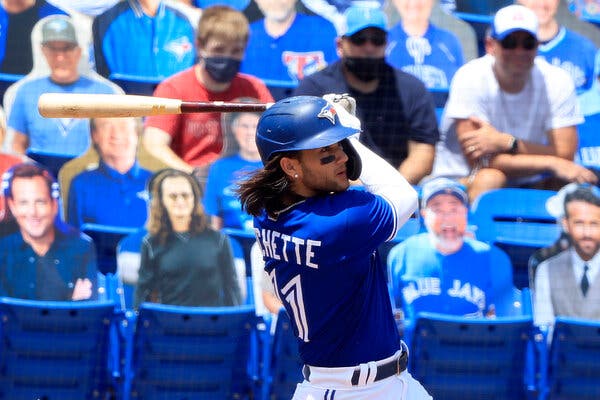 Bo Bichette and the Blue Jays have been playing regular-season games at TD Ballpark in Dunedin, Fla., which because of capacity restrictions can allow about 1,500 fans.Credit…Sam Greenwood/Getty Images

Among the additional changes to the Buffalo stadium, according to the Blue Jays: The bullpens were moved from foul territory to behind the outfield walls, batting cages were installed beyond right field, a weight room was built, the clubhouse facilities were renovated and the lighting of the field was improved with two additional, temporary light towers.

Last year, the Blue Jays were granted an exemption to hold summer workouts at Rogers Centre, but their plan to host regular-season games was rejected by the Canadian government over fears concerning the pandemic and travel. The Blue Jays also tried to share a stadium with the Baltimore Orioles or the Pittsburgh Pirates.

In the end, they wound up in Buffalo, where they were 17-9. They finished with a 32-28 record, which earned them a wild-card berth in the expanded playoffs. They lost their wild-card series to the Tampa Bay Rays, two games to none.

Expected to contend again this season behind a young core that includes Bo Bichette, Vladimir Guerrero Jr. and George Springer, the Jays were 14-14 entering Wednesday’s games, second to last in a muddled American League East. Springer has played in only four games because of injuries, and other key players, such as Cavan Biggio and Lourdes Gurriel Jr., have struggled.