The shadows are drawing in across Europe.

Inter Milan must shed millions of dollars from its salary bill. One or more of its brightest lights will have to be sold. Antonio Conte, the coach who only a few weeks ago ended the club’s decade-long wait for an Italian championship, does not intend to stick around to see his title-winning team broken up.

Barcelona, a billion dollars in debt, must build a squad to meet its princely ambitions on a pauper’s budget. The club’s wish list does not extend much beyond the giveaway aisle: Sergio Agüero, Georginio Wijnaldum, Eric García and Memphis Depay are all out of contract, all available for nothing, a cut-price cavalry.

Juventus must strip back in order to retool. Real Madrid’s president, Florentino Pérez, knows his fans crave a Galáctico but also that he cannot afford one. The usual delirium of transfer rumors swirls around Manchester United and Liverpool, but some players will have to go in order for others to arrive.

It is not just the grand houses that are feeling the pinch. The Lille team that won the French title will be stripped for parts. The rest of Ligue 1 faces a fire sale. Spending in the January transfer window was a fraction of its normal level across all of Europe’s top five leagues.

After years of plenty, money is tight, and times are straitened, for everybody. Almost everybody.

Manchester City paid more than $80 million to add Rúben Dias, who became the cornerstone of its defense.Credit…Pool photo by Peter Powell
Timo Werner, center, was the prime acquisition in Chelsea’s free-spending pandemic summer.Credit…Neil Hall/EPA, via Shutterstock

There remain a handful of bulls in soccer’s bear market, not just immune to but liable to benefit from the recession unfurling all around them. Saturday’s Champions League final features two of them.

A little more than a decade ago, it seemed certain that the 2010s would be dominated by the coming of Manchester City and Chelsea. Between them, they represented soccer’s new dawn: Chelsea, bankrolled by the wealth of its billionaire Russian owner, Roman Abramovich, and City, transformed by the functionally bottomless riches of the Emirate of Abu Dhabi. For a while, their meetings were referred to as El Cashico, always with the slight ghost of a sneer: a confected nickname for an ersatz imitation of an authentic rivalry.

Indeed, when Sheikh Mansour bin Zayed al-Nahyan first arrived at Manchester City, it was Chelsea where he first trained his sights. Chelsea had been so confident of signing Robinho, the Brazil forward, from Real Madrid that its website had started selling jerseys emblazoned with his name. When the Spanish club noticed, it withdrew from the deal. City, eager to make a statement of intent, duly stepped in.

The next summer, City tried to go a step further, identifying John Terry — Chelsea’s captain — as its priority transfer target. The club was, it was reported, prepared to pay him a then-unthinkable $300,000 a week. He chose not to accept, eventually, but City at least managed to bloody Chelsea’s nose: Abramovich was forced to reward Terry’s loyalty by making him the club’s highest-paid player.

It took much longer for an on-field rivalry to develop. The clubs did, as predicted, emerge as the prime forces in English soccer in the 2010s: Between them, they have won eight of the past 12 Premier League titles. But rarely did they find themselves in direct opposition. More often than not, one waxed as the other waned, and the greatest threats to their immediate ambitions came from the ranks of the established elite both were seeking to usurp.

Now, though, the situation has changed. Over the last year, the landscape of both English and European soccer has undergone a fundamental shift, one that has diminished almost all of their peers and leaves both Chelsea and City in a position of almost unparalleled strength. This Champions League final is not the culmination of a rivalry. It is, instead, a harbinger of what the future might hold.

They owe their prospects of uncontested primacy to a confluence of factors. Foremost, of course, is the economic impact of the pandemic, and the year of empty stadiums and balance-sheet black holes. 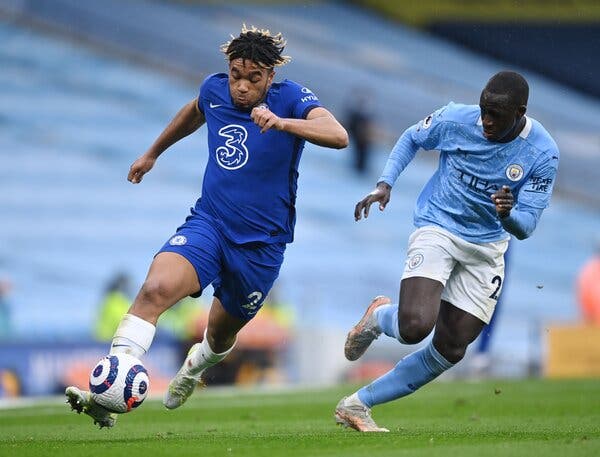 To assemble their star-studded teams, Chelsea and Manchester City have relied on some of the deepest pockets in soccer.Credit…Pool photo by Shaun Botterill

Estimates vary, but most suggest that the pandemic has cost Europe’s clubs somewhere in the region of $5 billion, almost half of it borne by the 20 richest teams on the continent, some of whom — Real, Barcelona and Juventus in particular — were already struggling under the weight of mismanagement.

City and Chelsea, because of the largess of their owners, seemed blissfully unaffected by that contraction. City spent $140 million on central defenders alone at the start of this season as its payroll hit an English-record high: almost $500 million-a-year, at a time when most of its rivals were trying to limit their spending.

Chelsea spent more last summer than any other team in Europe, and almost as much as all 18 teams of the Bundesliga combined. Chelsea paid out more in fees, in fact, than it had at any point under Abramovich, taking advantage of being a rare predator in a world of prey to acquire the likes of Timo Werner and Kai Havertz effectively unopposed.

There is little reason to believe, given the limited horizons across much of the rest of Europe, that this summer will prove any different. Among their peers, there is a growing acceptance that competing for talent with Chelsea, Manchester City and Paris St.-Germain is no longer feasible.

Combating that, of course, was part of the rationale behind the short-lived and unmourned Super League. Buried in the aborted competition’s founding document were a set of specific provisions on spending that went way beyond the Financial Fair Play regulations that govern the Champions League.

There would be “zero tolerance” for the manipulation of balance sheets. Expenditure on players, coaches and salaries would be strictly capped — at 55 percent of club revenues, or 27.5 percent of the highest-earning club, an effort to favor those teams with the largest fan bases — and clubs would have to commit to being profitable over a three-year period.

The rules would be overseen and enforced by a monitoring body, responsible for auditing member clubs’ finances, ruling on sponsorship agreements and sanctioning anyone who transgressed. It was to be called the Financial Stability Group.

City was part of the project, of course, but it was also, as those involved in its creation admit, its target. The Super League was not just a power play to grab a greater share of soccer’s revenues; it was also, for some of those involved, the only way to level a distorted playing field.

Its collapse, though, has weighted the dice ever further in the favor of the new elite.

Will even the dream of a Champions League final soon be out of reach for all but a few teams?Credit…Pool photo by David Ramos

Manchester City and Chelsea had already, in effect, been given a free pass when UEFA announced, last year, that it was suspending the financial regulations that previously prevented both teams from making full use of their owners’ wealth. The losses across Europe were so broad and so great, it said, that barely any teams would be able to meet its criteria.

UEFA is adamant that the system is not defunct. It says it is currently examining how to redraft and improve its cost-control rules to give them a “stronger focus on the present and the future.” European soccer’s governing body has said that it believes “wages and transfer fees, which represent the majority of clubs’ costs, must be reduced to acceptable levels.”

But in their current absence there are benefits for those in a position of strength. First, by stockpiling talent now, they can in effect get in before the door closes. Second, and most important, they have an opportunity to shape the new rules to their needs.

City, Chelsea and P.S.G. had long felt that the previous system of Financial Fair Play did not so much apply to them as apply at them. The original idea, their logic ran, of ensuring European soccer did not take on too much debt had been co-opted by a cartel of the game’s established powers to prevent clubs from investing in their teams, an effort to set in stone their position at the pinnacle.

This time, though, as a consequence of the Super League, it is City — who in withdrawing started the collapse of the breakaway — and P.SG. — which never joined it — who can expect to have a seat at the table when the new rules are discussed. Whatever form of financial regulation is introduced, it is more likely to represent their interests than the ostracized old elite. Chelsea, its ambitions aligned with those two, will benefit by proxy.

That, of course, is what those clubs who find their positions of power under threat fear: not that the collapse of the Super League will lead to some utopian, egalitarian vision of soccer’s future, but that one set of vested interests will be exchanged for another.

Privately, owners admit there is little prospect now of holding back City, in particular. Some in England believe the club could win the Premier League for the next decade if it continues to use its wealth as adroitly as it has. In Europe, the fear is that the Champions League will become the exclusive preserve of the new elite, rather than the old.

To some, of course, that may be a good thing, a welcome change after years of dominance by a handful of entitled and presumptuous superclubs. To others, it will have the feel of yet another step toward some grim vision of soccer’s future, where the global game becomes the plaything of oligarchs and plutocrats and nation states.

Either way, the path from there to here has been laid, irrevocably, over the last year as the pandemic hit and the money dried up and the regulations loosened and the establishment crumbled. The new future is here, and it starts on Saturday.

2021 French Open: What to Watch on Tuesday