The roots of everything that the Suns are now — a winning team, a franchise with championship hopes — date to 2015, when Phoenix made Devin Booker the 13th overall pick of the N.B.A. draft. For his first couple of seasons in Phoenix, he played in relative anonymity. The Suns were a terrible team. The closest Booker got to the playoffs was watching other players celebrate big wins on television.

Still, he kept refining his craft as change swirled around him. The franchise kept tinkering and building. By the start of last season, none of the teammates he had as a rookie remained on the roster. He made his first All-Star team, then helped the Suns close out their season a few months later with eight straight wins in the bubble environment at Walt Disney World — a run that cemented their identity as a young, tough-minded team but was not enough to make the playoffs.

Booker had to wait a little longer for his first trip to the postseason. On Sunday afternoon, the Suns opened the doors of their arena to nearly 12,000 fans for Game 1 of their first-round series against the Los Angeles Lakers. The Suns were among the teams that were able to increase their arena capacity for the start of the playoffs, and Coach Monty Williams said he found it jarring in the best way possible.

“When I came out and saw that many people and heard the noise, I was like, ‘Holy smokes, this is pretty cool,’ ” he said. “I had to get myself under control emotionally because I hadn’t been in that environment in a long time.”

If everything about the experience was new to Booker, he did a good job of hiding it in the Suns’ 99-90 win. He was dominant in an almost effortless way, outshining the title-tested luminaries with whom he shared the court. Booker has been on the cusp of emerging as one of the league’s brightest young stars for several years, but perhaps he needed to lead the Suns to a playoff win — against the Lakers, no less — to solidify his arrival.

It was only one game, of course, and it is worth remembering that the Lakers lost a pair of playoff series openers — to the Trail Blazers in the first round and to the Rockets in the conference semifinals — before crushing both Portland and Houston on their march to last season’s finals victory.

But the big stage did not seem to affect the 24-year-old Booker. If anything, he embraced it.

In the game’s early stages, he quickly passed out of a double-team, a decision that led to an open shot for a teammate. It was a small but significant moment: Booker seemed determined not to force much of anything. Instead, he was going to trust his teammates and bank on the slow, methodical process that had put the Suns in this position in the first place, as the No. 2 seed in the Western Conference. 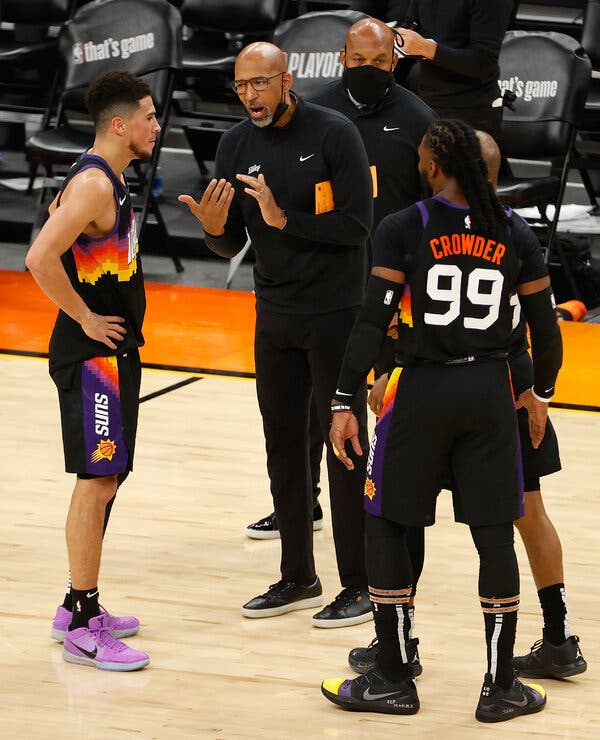 “Book has this reputation as a scorer, but he’s an unbelievably good passer,” Williams said, adding: “When he sees the double-team, he gets out of it. That’s who he is, and he probably doesn’t get enough credit for his willingness to pass.”

Make no mistake: Booker scored, too. He spun through small crowds of defenders. He pulled up from the 3-point line. He finished with a game-high 34 points while shooting 13 of 26 from the field. He also had 8 assists and 7 rebounds, stamping the playoffs with his presence.

The only player who may have been more impressive was his teammate, Deandre Ayton, the third-year center and 2018 No. 1 overall pick. He had 21 points and 16 rebounds while defending (and outplaying) the Lakers’ Anthony Davis, who was limited to 13 points and 7 rebounds. Davis took the blame for the Lakers’ loss. Booker described the 22-year-old Ayton’s performance as “next level.”

“You could see it in his face pregame, that he was ready to go,” Booker said.

James, who sprained his ankle in March and wound up missing 26 games, had a muted opener against the Suns, scoring 18 points and attempting just 13 field goals. As a team, the Lakers shot poorly from the 3-point line and were outrebounded.

It was an afternoon that, in some ways, typified their season. Because of injuries, the Lakers have seldom been whole. The defending champions, they limped into the playoffs as the conference’s No. 7 seed. Still, their struggles did not seem to matter to the oddsmakers who, before the start of the series, were favoring them to eliminate the Suns. Respect is hard won.

Lebron James had 18 points in the loss.Credit…Ross D. Franklin/Associated Press

On Sunday, bodies collided and tempers flared. The Suns’ Chris Paul, one of the few players on the team with plentiful postseason experience, injured his right shoulder but played through apparent pain. (Paul is expected to play in Game 2 on Tuesday night.) Cameron Payne, his teammate, was ejected for throwing an elbow — and the ball — at the Lakers’ Alex Caruso.

Aside from that kerfuffle, however, the Suns kept their composure. They never trailed in the second half, a surprisingly mature effort. Williams often tells his players that there are moments when “preparation meets opportunity,” and Booker seized his own. In fact, he had been preparing for Sunday’s game for years.

He could have cited the summer mornings when he was a teenager and he would run sprints while wearing a weighted vest under the watchful and demanding eye of his father, Melvin, a former N.B.A. player. Or the YouTube videos of stars that he would parse. Or his first few seasons in Phoenix, which were not much fun. The past, though, was prelude. Booker said he could sense “something inside” of him before Sunday’s game. It was hard to define.