Just as it has for 13 Triple Crown champions, the Japanese white pine that is famously captured in the logo of Belmont Park will provide shade over the paddock as the contenders for the 153rd running of the Belmont Stakes are saddled on Saturday.

Though there will be no Triple Crown on the line, or even close to the number of fans the race attracts in years without a pandemic, about 11,000 people are expected to be sprinkled in the cavernous grandstand and the bucolic backyard — Belmont Park’s refined version of an infield.

Whereas the mile-and-a-quarter Kentucky Derby typically has an overstuffed field and requires a bit of racing luck, and the mile-and-three-sixteenths Preakness Stakes calls for durability, the mile-and-a-half Belmont, nicknamed the Test of the Champion for a reason, requires the perfect mix of speed, stamina and grit.

The Belmont, first run in 1867 at Jerome Park in the Bronx and won by a filly named Ruthless, is the oldest of the three Triple Crown races, predating the Preakness by six years and the Derby by eight. Belmont Park opened in Elmont, N.Y., in 1905, almost 15 years after the death of August Belmont Sr., the financier and politician who established the race.

The main track, the longest in North America, is nicknamed the Big Sandy and looks more like a highway than a place for thoroughbreds. It circles a gigantic grass infield that, if it were in Manhattan, would have been packed with skyscrapers long ago.

In 1919, Sir Barton became the first horse to win the Derby, the Preakness and the Belmont, a feat that became known as the Triple Crown. Since 1931 the Belmont has been the final leg in every year but 2020, when it was held before the other Triple Crown races because of the pandemic.

In 1973, Secretariat became the ninth Triple Crown champion, winning by 31 lengths and prompting the track announcer, Chic Anderson, to exclaim, “He’s moving like a tremendous machine!”

When Affirmed won the Triple Crown in 1978, he was the third horse to do so in six years, and it seemed that securing the biggest prize in the sport was no longer a formidable task. But after that, 13 horses that won the Derby and the Preakness would come up short at the Belmont before the colt American Pharoah became a Triple Crown champion in 2015. Employees leapt onto one another’s backs, and fans danced and howled late into the night. A mere three years later, Justify repeated the feat.

While much has changed over the years — the song ushering the horses onto the track is again Frank Sinatra’s “New York, New York” after a one-year experiment with “Empire State of Mind,” and the grounds are shared with the Islanders’ new arena — much has stayed the same. A blanket of white carnations still greets the winner, Triple Crown hero or not, while the tree — plus the Secretariat statue that came after — still looms over it all. 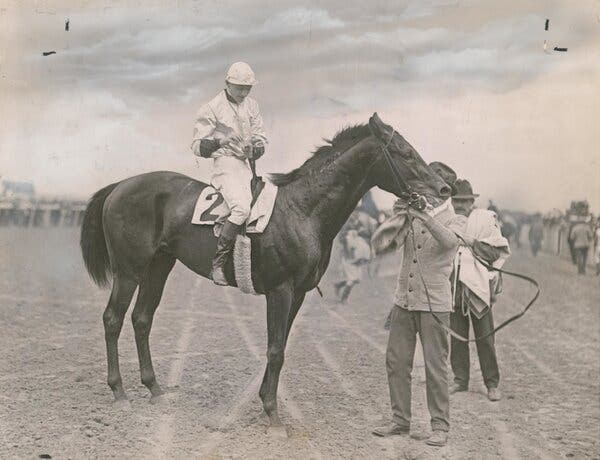 War Admiral was rewarded with two quarts of oats after his 1937 Triple Crown win.

Owner Fannie Hertz leading Count Fleet to the winner’s circle after the colt made a runaway of the seventy-fifth Belmont Stakes in 1943. By his triumph he wrote a new chapter in turf history, becoming the first horse ever to win all five of the big spring races — the Wood Memorial, Derby, Preakness, Withers and Belmont.

Reading about the competitors before the race begins.

Preparing for bettors on opening day at the park in 1968.

People sprawled in the paddock area, taking in the sun in 1971.

At left, Some of the 61,106 spectators in attendance at Belmont Park in 1981 to watch Pleasant Colony’s bid for the third jewel of racing’s Triple Crown. At right, Secretariat was guided across the finish line, 31 lengths ahead of his competitors, in 1973.

Bet Twice, with Craig Perret aboard, beginning to pull away from the field at the head of the stretch in 1987. The horse went on to win by 14 lengths.Credit…Eddie Hausner/The New York Times

Bet Twice, with Craig Perret aboard, beginning to pull away from the field at the head of the stretch in 1987. The horse went on to win by 14 lengths.

Alysheba gets a bath after returning to the barn from a workout in 1987.

In 1993, Julie Krone became the first woman to win a Triple Crown after riding Colonial Affair to victory.

Horses go through their morning workouts the day before the Belmont Stakes in 2007.

A fashionable spectator in 2011.

Riders and their horses making their way to a morning workout on race day in 2015.

American Pharoah and the jockey Victor Espinoza celebrating in the winner’s circle after capturing the Triple Crown in 2015.

The grandstands were almost empty as Tiz the Law, ridden by Manuel Franco and trained by Barclay Tagg, won the 152nd running of the Belmont Stakes in 2020.

Serena Williams Serves and Scraps Her Way Into the Fourth Round