It’s all fun and games until somebody gets fired.

The Mets had a good laugh over the weekend in Philadelphia, when they beat the Phillies twice with some big hits in the late innings. Behind the Zoom screen, Pete Alonso credited an imaginary character named Donnie Stevenson for helping the hitters. Donnie, you see, is an approach coach.

Then Michael Conforto joined in: “He made an appearance today at our hitter’s meeting. He’s all about the approach. He’s a hitting approach guy. He’s a guy that just gets the boys fired up and ready to go.”

The front office had a different approach. After Monday’s 6-5 loss in St. Louis, the Mets fired the team’s real hitting coaches, Chili Davis and Tom Slater. The Mets have averaged 3.30 runs per game, 29th in the majors and ahead of only the pitiful Detroit Tigers. Yet the team insists that results were irrelevant in this case.

“It’s based more on a vision for what we want our major league hitting program to be,” said Zack Scott, the Mets’ acting general manager. “I’m not going to dive too deep into those details to reveal what that vision is, necessarily, but the process under the hood that’s going on is really what’s important. It’s not about results. It’s not about 23 games of results.”

Less than five weeks into Steven Cohen’s tenure as the new owner, the Mets are 11-12. Most nights, they can’t hit. Their new centerpiece, shortstop Francisco Lindor, is batting .163. Only one N.L. player — Cincinnati’s Eugenio Suarez — had a lower average through Monday with a minimum of 100 plate appearances. And at least Suarez had five home runs. Lindor has one.

And while this problem predates Lindor, it is worth repeating: The offense has been so miserable for Jacob deGrom that the Mets have wasted his prime. Since 2018, deGrom has a 1.99 earned run average, yet the Mets are 38-43 in his starts, a record that defies belief. 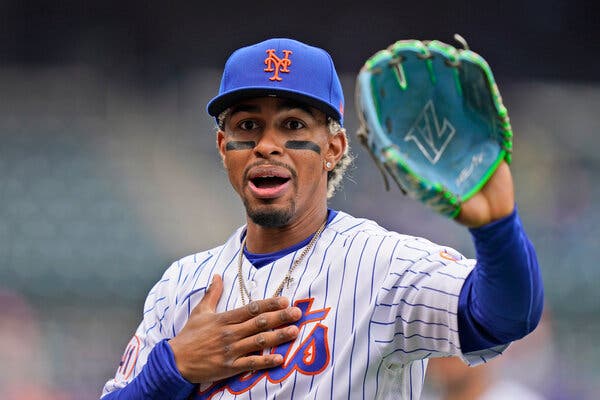 “It doesn’t feel right, for sure,” Lindor said last week, after he was booed at home. Credit…Seth Wenig/Associated Press

It is easy to see why frustration has been building, but as of midday on Monday, the team’s first fan had not tweeted about the firings. Cohen’s most recent message was about — who else? — the hitters’ fictitious friend: “I love Donnie. A major resource to the team and pretty cheap too.” Cohen also encouraged a Mets fan whose wife was in labor to name the baby Donnie.

Cohen’s relative accessibility to fellow Mets fans is laudable. But in the age of social media and socially distanced interaction with reporters, it is harder and harder to gauge what is really going on. Asked by Newsday’s Dave Lennon about the timing of the firings — after the players had credited a fake guru for their mini-offensive surge — Scott seemed puzzled.

“I’m not sure I’m completely understanding your question,” he said. “You’d have to ask the players about Donnie. I guess the one thing I’ll comment on is, obviously we had a lot of hits the last couple of nights, scored some runs. I think that should highlight that this isn’t about recent results. This is about the process behind the scenes.”

If the Mets had been first in the N.L. in runs scored, instead of last, it is a safe bet they would not have fired Davis and Slater. Then again, if they had been scoring more runs, the process — whatever that means — would have most likely been better.

“They’re both good relationship-builders,” Scott said of Quattlebaum and Howard, who are former minor league infielders. “They both see hitting mechanics very well. They prepare very well, they work really hard. I think that the two of them complement each other well and will bring a lot to the table.”

The fact is that no teams are hitting well right now. Pitchers dictate the action, and their craft has rapidly become so advanced that hitters cannot keep up. Waves of live arms are trained to overpower hitters for short bursts, using technology to precisely shape their off-speed pitches for maximum effect.

This is not to say that the Mets are doing the best they can. While Lindor is coming off his worst season — he batted .258 with a .750 on-base plus slugging percentage over 60 games for Cleveland in 2020 — he’s a much, much better hitter than this. But as a newcomer with $363.5 million committed to him through 2031, he has no equity with the Citi Field fans and has yet to earn their trust.

“It doesn’t feel right, for sure,” Lindor said last week, after he was booed at home. “Interesting, because this is the first time that it happened in my career, and funny because I’m getting booed and people think I’m going to go home and think about why I’m getting booed.”

Everyone gets it. The results were not there, and now two coaches are gone. No word on the status of Donnie.

2021 French Open: What to Watch on Sunday Morning