The game and the series were never in serious doubt.

The depleted Boston Celtics maintained a sliver of hope of emerging with a victory over the Nets on Tuesday by initially keeping the score close in Game 5 of the best-of-seven series. But, in quick and devastating succession, the Nets crushed any ambition the Celtics had left. That’s what can happen when you have stars like these:

Kevin Durant opened the salvos with a 3-point shot midway through the fourth quarter.

Kyrie Irving buried one on the Nets’ following possession.

Next, James Harden followed with one of his own.

In less than a minute, an 8-point Celtics deficit ballooned to 15 and a first-round series win for the Nets.

For the Nets, the sequence showcased their roster as envisioned months ago, the stars aligning to alternate taking turns at the helm in piloting the Nets toward a championship.

Yes, that lineup had few opportunities to coalesce throughout a rickety regular season. The Nets entered the postseason with questions about the chemistry of their three best players. They had played just eight games together while limited with injuries and coronavirus health and safety protocols.

So what if they didn’t play much together?

Throw one of them the ball in isolation and watch the buckets pour in.

“We don’t want to take any of this for granted,” Irving said after the Game 5 victory. “We know this doesn’t happen too often in our culture, in our history, where three of the best scorers to ever play the game and then you have a collection of guys that have done unbelievable things as well in this league, either coming off the bench or starting with us.”

The Nets faced a shorthanded Celtics team. Boston entered without the services of the All-Star Jaylen Brown (wrist) and lost key components as the series wore on in guard Kemba Walker (knee) and center Robert Williams (ankle). But the Celtics still mustered a fight and forced the Nets to break a sweat in dispatching them.

“We’ve made strides in just a short period of time,” Irving said.

Here are some other key takeaways following the Nets’ first-round victory over Boston.

Kyrie Irving is ready for the moment.

Irving balled out against the Celtics.

He, of course, had experienced previous postseason success. He hit the crucial shot that propelled Cleveland to a championship over Golden State in 2016. But he did not have the subsequent breakthrough after he was traded to Boston in 2017 — as Celtics fans will certainly attest — and spent most of the 2019-20 season, his first with the Nets, out while rehabbing an injury.

He is among friends now.

More than anything, the Nets’ three stars sound like admirers of one another, appreciative of their individual skill sets.

Here’s Durant discussing Irving following the Boston series: “His mind is so different that stuff that he brings out is just unexpected — one legger, off the right leg, shooting off the glass, left-hand finishes, right-hand finishes, ball handling.”

“He’s a joy to watch and play with,” Durant added.

Irving had a spectacular regular season. Against Boston, he was dynamic.

He punctuated his first-round performance by pouring in 39 points in a Game 4 blowout win.

“I’m grateful for the opportunity that I had in Boston,” Irving said, adding that “there was a lot going on personally while I was there in Boston that people don’t know about.”

Now, he said, he’s moving on: “So just grateful that we have a chance to be together in the trenches, me and my teammates, and we just get to move on from this.” 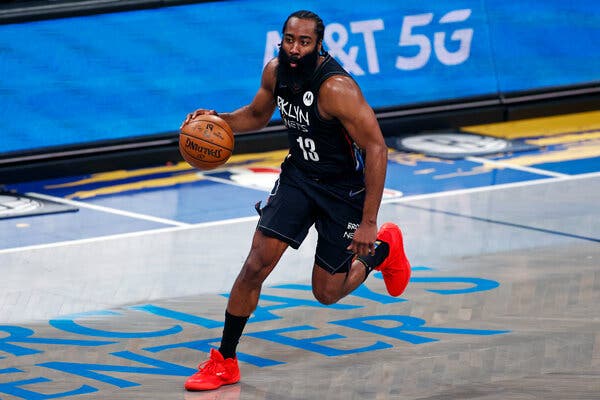 James Harden is willing to sacrifice.

Harden, in the first-round series, showed he was willing to use any of the tools in his bag to win.

Often, he blows past his primary defender and surveys the remaining defense. He scores if the lane is open, but is only too happy to pass the ball if an easy scoring opportunity presents itself.

“He comes into the gym every day and it’s just excitement to play basketball,” Durant said. “With somebody who loves to play so much, the energy is just infectious and you can tell everybody was drawn to James since the day he got here and his presence was just key for us.”

Harden is the lone member of the Nets’ Big Three without a championship. This may be his best shot.

Kevin Durant’s defense will be key.

Durant is an amazing scorer. That is not debatable.

But the Nets have that area covered. Durant’s defense may be one of their best weapons for their second-round series against the Milwaukee Bucks.

Milwaukee breezed past Miami in a first-round sweep, atoning for last year’s playoff loss to the Heat and reinserting themselves as an Eastern Conference contender.

No one on this planet can fully contain the offensive juggernaut that is Durant, Harden and Irving. Milwaukee, at least, has the ingredients to possibly slow them down. Jrue Holiday, acquired in an off-season trade, is arguably the league’s top perimeter defender. P.J. Tucker and Khris Middleton don’t mind mixing it up in the trenches. Giannis Antetokounmpo is last season’s defensive player of the year.

“He’s long, athletic,” Durant said of Antetokounmpo. “He plays hard. He cares about his teammates. He cares about winning. Put that combination together, you make a tough player.”

But Durant may as well have been describing himself. Against Boston, he swooped in from the weakside to have the backs of defeated primary defenders. His defensive acumen will probably be a key if the Nets are to advance to the conference finals.

Both the Nets and the Bucks are largely healthy but not at full strength. Milwaukee’s Donte DiVincenzo is out for the remainder of the playoffs with an ankle injury.

Jeff Green, the Nets’ versatile defender, missed the last three games of the Boston series with a strained plantar fascia.

A Playoff Homecoming, and Swan Song, for the Islanders