When Natalia Chavez hit a half-court buzzer-beater in overtime to help Volcano Vista High School win the New Mexico state championship this month, her shot went viral on the internet and became one of ESPN’s top plays.

It was 45 feet 5.5 inches, to be precise, as basketball fans who were tracking the game on their electronic devices knew right away.

That’s because the New Mexico Activities Association, working with ShotTracker, a technology company, and Playfly Sports, a marketing company, used sensors to track the movement and positioning of athletes and the basketball as the games were in progress.

It was the first time that such technology — which has become increasingly common in college and professional sports — had been used at the high school championship level, according to the National Federation of State High School Associations.

As the world of high school sports becomes more commercialized, people who regulate youth sports say that it is inevitable that technology will play an even bigger role in everything from real-time analytics to college recruiting.

The New Mexico championships produced the kind of statistics that die-hard N.B.A., W.N.B.A. or N.C.A.A. fans would find familiar: Color-coded dots showing where shots were taken. How many times a particular player touched the ball. What each player’s plus-minus rating was. Which player was most effective (or not) at contesting shots or defending the rim. 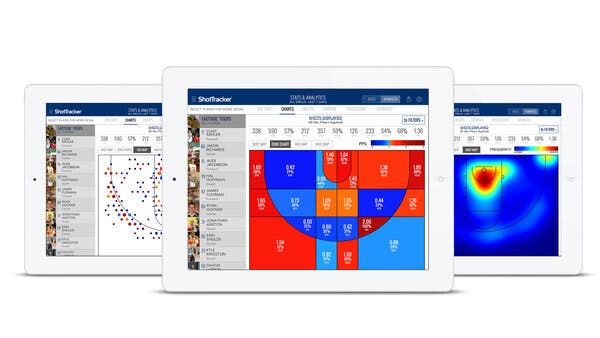 ShotTracker can send all sorts of statistics to users on their electronic devices.Credit…ShotTracker

“It would be something I would like to see used more,” said Jeron McIntosh, coach of the Del Norte High School boys’ team, which won the Class 4A championship.

McIntosh said that he felt during the game that his best player had taken too many ill-advised shots and was not playing well. But the statistics revealed he was actually shooting 50 percent from the field.

“Your mentality changes — instead of getting on him with every bad shot, it’s like, OK, let’s work on the next one,” he said.

Whether the New Mexico experiment becomes standard practice depends on each state, as well as assuaging any concerns parents, coaches and schools may have about privacy involving athletes who are mostly minors. If a 16-year-old player goes 0 for 12 from the field and turns the ball over four times in the first half, is it embarrassing to instantly provide those statistics?

Karissa Niehoff, executive director of the National Federation of State High School Associations, cautioned that “we have to remain tethered to essential questions that exist to protect the integrity of the sport as it’s intended to be played, and the age group we’re talking about. We have to weigh the pros and cons.”

Still, she praised the New Mexico experiment as “a great example of how technology can make the experience better for all involved without compromising the integrity of how the sport is played, or providing an advantage to one team or the other.”

The arrangement came together at the last minute, partly because of the uncertainty with Covid-19. After all, the season, normally held in the winter, had already been delayed a couple of months, with an abbreviated schedule.

Once officials scheduled the championships for May 6 to 8 at the University of New Mexico arena, known as the Pit, New Mexico officials began working with Playfly, ShotTracker and corporate sponsors like the New Mexico Gas Company.

Sensors, roughly half the size of a USB flash drive, were inserted into adhesive patches on each player’s jersey and affixed inside the basketballs. Other sensors, each about the size of a two-liter bottle, were placed in the rafters throughout the arena.

Combined, those three elements generated precise data about location and movement, in a manner not unlike Bluetooth or GPS technology, said Bill Moses, chief executive of ShotTracker, which just became a partner of the Big 12 for men’s and women’s basketball games. And since ShotTracker had already installed sensors in the Pit, thanks to an earlier arrangement with Mountain West Conference colleges, all that was needed for the high school championships were sensors in the jerseys and the balls.

Coaches and referees said they didn’t notice any differences in the jerseys, the balls or the flow of the game. In fact, tournament officials had to chase down a few players after they played because they had forgotten to return the sensors.

The only quirk was that the basketball was placed on a docking station, like a portable charger, before the game and during halftime.

Walt Sanchez, a special-education teacher who worked as a referee at the championships, praised the technology. He said the extra information could help referees prepare better before games, in scouting a team’s players and tendencies, and afterward, in analyzing what the refs could do to improve.

“I’m a purist,” he said. “There’s a lot of gimmicky stuff out there, but this is one of the better tools.”

Davyeon Ross, a co-founder of ShotTracker and its president, emphasized that the technology did not measure biometrics or health data — frequent topics of concern about the use of technology in sports.

“This stuff is all observable,” he said. “It’s above the skin, not below the skin.”

Ross said there were more than 25,000 views on the New Mexico Activities Association app and on social media, as well as 43,000 game livestreams and 10,000 on-demand downloads. High school football will be next, he said, with volleyball, hockey and soccer among the possibilities in the future.

Playfly Sports, the monetization partner of the activities association, helped draw sponsors to the event. Playfly has similar arrangements with eight other states, including California, and hopes to bring similar events to more states featuring “much more robust scoring and results for the regular season,” said Charles Schmidt, vice president and executive director of Playfly’s high school division.

“States will see what others are doing, and adopt what’s working,” he said. “I see this as peer pressure, and not in a negative sense.”

The statistics could be used as recruiting tools — with some coaches playing up the data if it makes their players look better, and vice versa.

Niehoff of the national high schools federation said she wouldn’t be surprised if IMG Academy, Montverde and other prep powerhouses forming their own national league eventually purchased the technology for their gyms to fine-tune their players’ recruiting profiles.

Still, Lisa Villareal, coach of the Volcano Vista girls’ team of buzzer-beater fame, said that for all of the helpful information that ShotTracker and similar tools can provide, officials needed to ensure fairness in any future installations in high school gyms.

“I don’t want anyone to say, ‘Oh look at that school, they have a lot more than we do,’” she said.

Fighting in the N.H.L. Reveals Few, if Any, Winners