PAWTUCKET, R.I. — The man entrusted with the key approached a dull-gray door flecked with rust. A turn of the wrist threw the lock to reveal a ballpark in suspension, its outfield far from true-hop ready, its billboards fading, its thousands of empty seats the hard-plastic playground of pigeons.

Maybe Pawtucket should charge the birds admission, said the employee, Chris Crawley, who is the maintenance manager for the Rhode Island city of 71,000. His joke was of the coping kind.

It was a sunny and mild Tuesday, perfect for the home opener of the spanking new Worcester Red Sox in a spanking new ballpark 40 miles to the north, in Massachusetts. That is all well and good and hooray for baseball, but — for a half-century and up until very recently — the Worcester Red Sox were known as the Pawtucket Red Sox.

Their home was here: in McCoy Stadium, in Pawtucket, in Rhode Island, until a change in ownership and some shortsightedness on this side of the state border gave Worcester the opening to lure the franchise away. The team long known as the PawSox are now called the WooSox, a nickname that may never roll easily off the Rhode Island tongue, if at all. 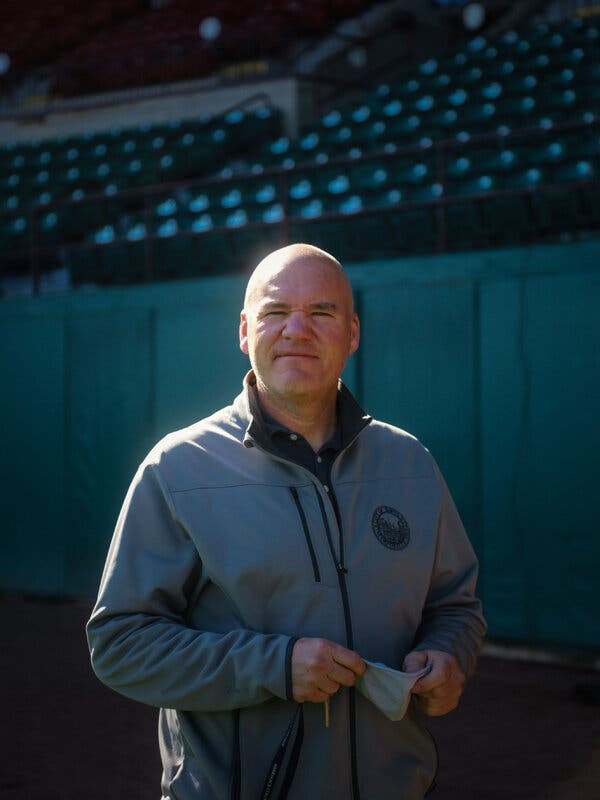 Chris Crawley is the maintenance manager of Pawtucket. The city is maintaining McCoy Stadium.

All of which means that on this opening day at McCoy, in an old mill city that could use a break, all that could be heard were the coos of feathered gate-crashers.

“Hearing the birds and hearing no baseball,” said Crawley, who is 52. “It’s a weird feeling.”

The story of the Pawtucket Red Sox carries the familiar moral that in the end, baseball is a business. But it is also the story of a piece of identity lost. This minor league team was as much a part of Rhode Island as quahogs, or Del’s Lemonade, or hoary stories of having once bumped into so-and-so the mobster at such-and-such a joint.

The team began as a Double-A team in 1970, playing its games here at McCoy, a Works Progress Administration project built on a swamp 80 years ago. Local lore holds that oceans of cement were needed to solidify the mushy ground, to the benefit of connected contractors.

The team moved up to the Triple-A level in 1973, where the franchise struggled to survive until a wealthy entrepreneur named Ben Mondor took over in 1977. What he didn’t know about the game he made up for with his business acumen. A Pawtucket Red Sox game became an affordable family event, with reasonably priced tickets, cheap concessions and — here was his genius — free parking.

The experience came packaged with the thrill of seeing ballplayers striving to play for the major league Boston Red Sox, whose home field, Fenway Park, was an hour and one Dunkin’ cup of coffee away. You might be seeing the next Yaz, the next — dare we say it — Teddy Ballgame.

Rhode Island embraced the team. It became tradition to see the Saturday night fireworks, or to return batting-practice balls for tickets, or to fish for autographs by dangling plastic milk bottles containing baseballs and pens in front of the dugouts tucked beneath the stands. But nothing is static.

Mondor died in 2010, and his widow, Madeleine, sold the team in 2015 to a group led by Larry Lucchino, then the president and chief executive officer of the Boston Red Sox and a baseball veteran who had overseen the building of major league stadiums in other cities. It was clear that Lucchino was impervious to McCoy’s scrappy charms, and that change was coming.

“In all honesty, it was a combination of factors,” the mayor of Pawtucket, Donald R. Grebien, said as he stood near the home team dugout, its green seat cushions frayed by the elements. His voice carried notes of disappointment and what-could-have-been.

Mayor Donald R. Grebien surveyed the former home of the PawSox on Tuesday.

The team’s new owners introduced themselves to Pawtucket by saying they wanted to leave. They announced a proposal to move to a stadium that would be built, largely at taxpayer expense, in Providence — an egregious overreach, and a profound misread of the current Rhode Island mood.

The plan died a quiet death, but still. “It ripped the heart out of us,” Grebien, 53, said.

A feasibility study determined that a proper renovation of McCoy would cost nearly $70 million, so Grebien worked with the team on another proposal: to build an $83 million ballpark in downtown Pawtucket, along the Blackstone River. The team would pay more than half the cost, with the state and the city covering the rest.

“They wanted new,” the mayor said. “To keep them, we needed new.”

After months of hearings, negotiations and obstruction by the then-speaker of the house, a reworked financing arrangement was rejected in 2018 by the team, which could barely contain itself in announcing a relocation to Worcester — to a minor-league ballpark that, at $157 million, is said by the Worcester Business Journal to be the most expensive in history.

The move left Pawtucket “to figure out how to pick up the pieces,” Mayor Grebien said.

The divorce between this old couple of city and team has been awkward. After the pandemic robbed the PawSox of a farewell 2020 season, the team invited fans to “Dining on the Diamond” events at which they could eat ballpark food on picnic tables planted on the field. Nice, but not the same.

And the city, now solely responsible for an aging, empty McCoy, has sued the team on the grounds that it had failed to maintain and repair the stadium properly — a charge the team rejects. The city is paying a contractor $6,500 a month to keep McCoy locked and secured.

In a few hours on this Tuesday, baseball would be played in a new ballpark 40 miles to the north, filling the coffers with money, the parking lots with cars and the fans with memories of a WooSox victory over Syracuse. Here at McCoy, the pigeons would settle in and the parking lot would continue to be used for a coronavirus testing site. And tomorrow, vaccinations will be offered, and the old PawSox gift shop will be used as an observation room.

A mural on a wall about the longest game in professional baseball history — 33 innings — played here in 1981.

For now, though, about the only movement in McCoy came from the two Pawtucket employees, their footsteps echoing through the concrete corridors. Crawley, the maintenance manager, grew up nearby and worked here for 10 years as a groundskeeper. Grebien, the mayor, used to come here as a boy with his father and grandfather, both Teamster truck drivers, both baseball aficionados.

They walked past the mementos that the team had chosen to neither take nor sell. A wall tribute to the longest game in professional baseball history — 33 innings — played here in 1981. A sepia-tinted photo of the future Hall of Famer Jim Rice, celebrating his 1974 win of the International League triple crown. A price list for souvenirs (PawSox pencil — $0.50; PawSox magnet — $2.50; PawSox #1 foam finger — $5.00).

The mayor had to leave. Among other things, he is now focused on a $300 million redevelopment plan for downtown that would include hundreds of residential units, assorted retail and commercial space, and an 11,000-seat soccer stadium. A better deal for the city, he said.

Pawtucket is paying a contractor $6,500 a month to keep McCoy locked and secured

But the Pawtucket Red Sox? “It’s part of our soul,” he said.

The two men walked down the concrete stairs, sidestepping large deposits of bird droppings. They walked out the dull-gray door, the maintenance manager first, the mayor following.

“Chris, you want the top locked too?” the mayor called out.

No need, the man with the key said. The place is locked up.

Dan Barry, a domestic correspondent, is the author of “Bottom of the 33rd: Hope, Redemption and Baseball’s Longest Game,’’ in which the Pawtucket Red Sox, eventually, beat the Rochester Red Wings in 1981.

What to Expect in the First Round of the N.F.L. Draft