If there were a way to quantify what makes a team interesting, the Tampa Bay Rays would find it. Maybe they already have. They play as if trapped in a fun house mirror, wacky and warped and wondrously weird — and always bigger than they appear.

The Rays brought their slingshots to Yankee Stadium on Monday for a four-game series with the paper giants of the Bronx. The Rays won, of course, 3-1, and now have baseball’s best record, at 35-20. They are making a habit of humbling the Yankees.

“I’d be lying if I said all of us didn’t get a little more amped up for a series with the Yankees,” center fielder Kevin Kiermaier said on Monday morning. “Good fun.”

Kiermaier is the only Rays player making more than $6.5 million this season. The Yankees have 10, but stand five and a half games behind Tampa Bay in the American League East. The Rays have won 16 of their last 17 games overall, and — including last fall’s division series — 20 of their last 27 against the Yankees.

On Monday, Tampa Bay won with a former Yankee starting and closing, but you may have missed their time in New York. Rich Hill, who got the win, pitched briefly in pinstripes in 2014. J.P. Feyereisen, who got the save, came to the Yankees from Cleveland in 2016 as part of the Andrew Miller trade. He never escaped the minors in New York.

These were the other Rays’ pitchers on Monday: Michael Wacha, who flopped with the Mets last season; Pete Fairbanks, acquired from Texas in 2019 for a former Yankees prospect, Nick Solak; and Ryan Thompson, a side-arming former Rule 5 draft pick who wears No. 81. 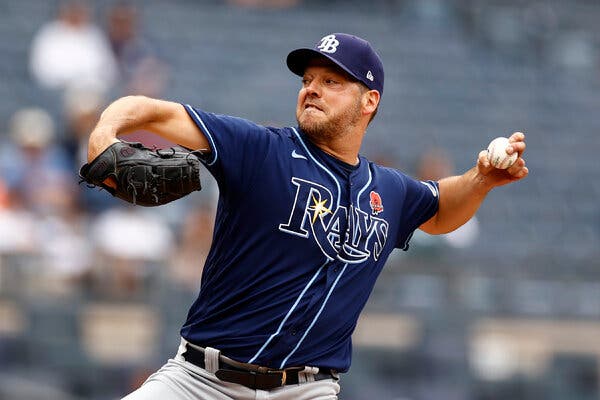 At 41, Rich Hill is the oldest active pitcher in the majors. He threw five shutout innings against the Yankees on Monday.Credit…Adam Hunger/Associated Press

The Rays use a similar combination every day. More than any other franchise, they have recognized and seized on the overriding feature of the modern game: the vast inventory of quality pitchers. They never overpay because they know they don’t have to. They build cheap and effective staffs by emphasizing pitchers’ best stuff while never asking too much.

“We try to identify the strengths that any arm has, we try to make sure they understand their strengths, and, through that, provide them confidence to go out and maximize who they are,” General Manager Erik Neander said by phone on Monday.

“We really don’t try to make it any more complicated than that. This game is really driven by — I mean, it’s ability — but it’s confidence. There’s a lot of people here who have the ability. It’s making sure they know themselves.”

That might as well be the mantra for the organization. The Rays know exactly who they are. They have low revenue, low attendance and a ruthless approach to roster management.

After losing the World Series in six games to the Los Angeles Dodgers last October, Tampa Bay shed two of its top three starters, declining a $15 million option on Charlie Morton and trading Blake Snell to the San Diego Padres. Those were not easy calls, Neander said, but they were sensible.

“Over the last couple of years, Charlie and Blake have been in the middle of a lot of our success,” he said. “But when those two guys didn’t appear in a game, the rest of this unit still won 60 percent of those games, too. That gave us at least some confidence that we still had a chance to be OK.”

Kevin Cash and Erik Neander, the manager and general manager of the Rays, have a formula for success that is spreading throughout baseball.Credit…Nathan Ray Seebeck/USA Today Sports, via Reuters

And so they are. Snell, who has struggled for the Padres, brought back two prospects plus catcher Francisco Mejia and starter Luis Patino, who looked good in a brief promotion and is now stretching out his workload in the minors.

As for Morton, the Rays took the money they would have paid him and essentially spread it among four veterans: Hill, Wacha, Chris Archer and Collin McHugh — a diverse portfolio, just the way Tampa Bay likes it.

“So much of this game is about appreciating what you don’t see coming,” Neander said. “Oftentimes we win with talent, but we really win with depth, just getting as many options as possible on the table so you have access to all the surprises that happen, the good and the bad.”

McHugh was dominant in May as an opener and middle man. Archer is recovering from a forearm injury. Wacha has been inconsistent, but did beat the Yankees in April. Hill has been outstanding: 4-2 with a 3.32 E.R.A. after five shutout innings on Monday.

He left abruptly, after just 56 pitches, but the Rays, of course, try to limit opponents from getting too many looks at their pitchers. That strategy backfired in the final game of the World Series, when they lifted Snell from a shutout. It worked on Monday, with Hill’s blessing.

J.P. Feyereisen nailed down his third save in Monday’s win. The right-hander spent time in the Yankees’ minor league system.Credit…Vincent Carchietta/USA Today Sports, via Reuters

“I know what we do here and how that buy-in is,” said Hill, 41, the majors’ oldest pitcher. “Being on board is important for a total team win.”

Feyereisen joined the team last month from Milwaukee in a trade for shortstop Willy Adames. The Rays had so much depth behind Adames that they called up one shortstop, Taylor Walls, while another — the consensus best prospect in the minors, Wander Franco — remains in Class AAA.

“Erik Neander, he’s a genius, man,” Kiermaier said. “He brings in great people who have great talents as well, guys who fit right in with the atmosphere that we’ve built here over the years. And here we are with the best record in the A.L.”

The Dodgers, the Boston Red Sox and the Houston Astros all hired Rays executives to run their baseball operations. The Rays’ way is spreading, and that’s a concern; you wouldn’t want a league full of imitators, because highly paid stars and durable starting pitchers are essential to baseball’s appeal. The Rays’ mix-and-match offense also leads the majors in strikeouts at a time when sport needs more balls in play, not fewer.

But for who they are and how they do it, the Rays are a marvel. For now they are almost unbeatable, heeding Kiermaier’s message from a recent clubhouse speech.

“Hey, don’t let us get hot,” Kiermaier said, repeating what he told the team. “Because when we do, the rest of the league needs to watch out.”

Taijuan Walker Is Dominant in Win Over Cardinals