The battle for control of soccer’s billion-dollar economy — a fight that Rory Smith of The New York Times referred to on Friday as The Sunday-Tuesday War — began with rumors of a blockbuster new league, then burst into the open with talk of lies, deceptions and betrayals; prompted street protests in several countries; and produced threats of official government action and sporting excommunication in many others.

And then it all ended, only two days after the news broke, with a cascade of humbling reversals by half of its member clubs.

If you weren’t paying attention, you missed quite a bit. Here’s a recap. 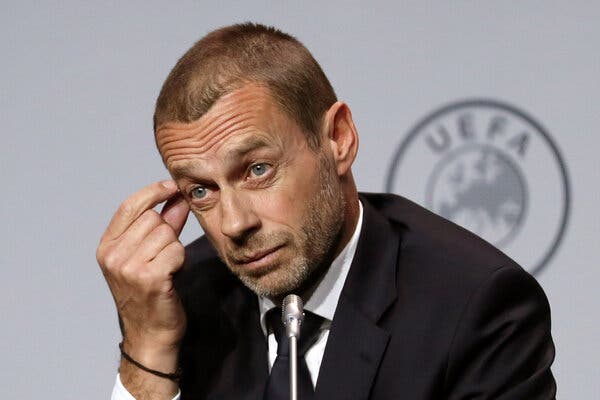 The president of European soccer’s governing body, Aleksander Ceferin, was working to thwart the Super League even before it was announced.Credit…Yves Herman/Reuters

The idea of a superleague of top European soccer teams had been discussed for decades, but never with the detail and the concrete plans that emerged on Sunday morning.

After months of secret talks, the breakaway teams — which included some of the biggest, richest and best-known teams in world sports — confirmed that they were forming a new league, unmoored from soccer’s century-old league systems and Continental organizational structure. They declared that the soccer economy no longer worked for them, and that their new project would create a shower of riches that would reach every level of the game.

European officials, national leagues and the clubs left out — not to mention fans, who smelled greed as the prime motivation — recoiled.

Read more from Tariq Panja, who broke the news.

Rory Smith noted not only what soccer would lose with the play by the big clubs, but also why fans (and sponsors, and TV broadcasters, and the news media) bore some of the blame for the idea’s coming to fruition.

A wall in Barcelona. Outrage among fans was not limited to England.Credit…Nacho Doce/Reuters

By Monday morning, the battle to stop the Super League was on. Governments and heads of state weighed in. So did FIFA, which often views itself as an independent nation. Secret intelligence was shared, frantic phone calls were made, and shouts of “Judas!” and other insults, like “snakes” and “liars,” added to the tension.

How was the Super League different from the Champions League? Let us explain.Credit…Pool photo by David Ramos

Still not sure what the Super League even was? We can catch you up really fast right here.

With prominent players, respected coaches, everyday fans, and sponsors and television networks adding their voices to the opposition, Gianni Infantino, the president of FIFA, was persuaded to pull out the biggest threat in the arsenal of those fighting for the status quo: In a speech at the congress of European soccer’s governing body, he reiterated FIFA’s threat to ban any players who took part in an outside competition from the World Cup:

By Tuesday, even Liverpool’s dogs had turned against the Super League.Credit…Jon Super/Associated Press

It All Falls Apart

Tuesday was a blur. First, whispers, then street protests, and then news: Manchester City was out. Chelsea was looking for ways out of its contract. Arsenal, Spurs and Manchester United walked away. Liverpool followed.

Forty-eight hours after it began, it was all over.

Chelsea fans took to the streets on Tuesday to protest the club’s Super League membership. Within hours, the club had dropped out.Credit…Adrian Dennis/Agence France-Presse — Getty Images

What Were They Thinking?

How, Rory Smith asked, could the founders have been so blind? How could they not have seen this coming? Where was the people backing this idea? And do we ever have to take their threats seriously again?

The back story, reported in rich detail by Tariq Panja, was even richer, though. How Barcelona tipped everyone’s hand. How Paris St.-Germain and Bayern — after receiving offers to join — turned down the league and instead helped to kill it. How an olive branch tucked into a speech in Switzerland gave England’s clubs a way out.

The full, definitive story reads like a movie thriller:

Would Real Madrid fans accept a few lean years as their club cut costs? Would the fans of any Super League club? Would you?Credit…Jose Breton/Associated Press

By Friday, even the bankers were apologizing. But soccer’s problems were not over.

The plan hatched by Europe’s elite clubs was wrong on almost every level, but its architects got one thing right: Soccer’s economy, as it stands, does not work.