As the coronavirus pandemic numbers improve in some parts of the world, and vaccines are injected into more and more arms, sports is slowly, carefully returning to the days of full stadiums.

Or, sometimes, not so slowly and not so carefully. For many events, the race is on to get as many fans in the stands as possible and claim the title of biggest event since the pandemic began.

It may not be Roger Maris’s chase for 61 homers or a scrap for the final N.B.A. playoff spot. But a lot of sports seem to want some kind of attendance “record.”

(To be fair, in some cases, these records seem to be of more interest to the news media than to organizers, many of whom may not necessarily have wanted to highlight that they were packing in fans during a public health crisis.)

Here’s a look at some of the claimants, many of whom have already lost their “titles.” 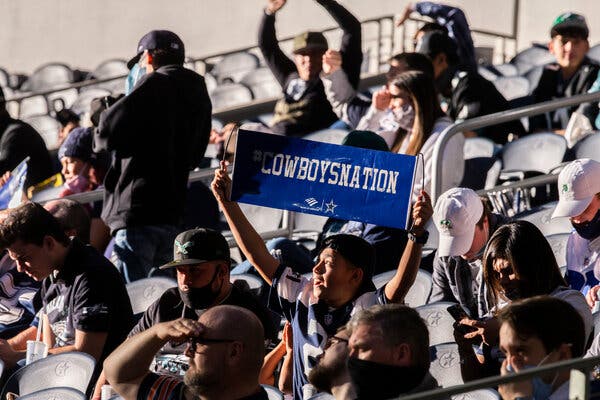 The Cowboys welcomed over 30,000 fans in Arlington for their final home game of the 2020 season.Credit…Brandon Wade/Associated Press

The Dallas Cowboys welcome 30,131 fans to AT&T Stadium for their final home game, against the Philadelphia Eagles, to finish 2020 with the biggest N.F.L. crowd of the season. In all, the Cowboys had 197,000 total fans at their eight home games, leading the league. “I see a continued aggressive approach to having fans out there,” the team’s owner, Jerry Jones, said on Dallas sports talk radio. “And that’s not being insensitive to the fact that we got our Covid and outbreak.”

The Jacksonville Jaguars missed out on the N.F.L. attendance record, ranking second with 127,000 total fans. (They also missed out on the best record in the league by a slightly greater margin, finishing 1-15.)

Making Dallas look like a model of cautiousness, organizers allow an estimated 67,000 people to watch a cricket match in India, 50 percent of capacity in the huge venue. Two days later, 66,000 turned up for another game. But three more games at the same venue and three later in the month in Pune were played behind closed doors when the cricket board had second thoughts because of rising coronavirus cases. Given the dire coronavirus situation in India, setting a temporary record might have been a terrible idea.

With Australia keeping a tight lid on the virus, the country was ready to expand its attendances from 50 percent of capacity to 75 percent. That meant 75,000 would be permitted to attend this Australian rules football game, surpassing the Indian cricket games. In the end, though, only 51,000 fans turned up. “Hopes of a world-record stadium attendance for a sporting event since the start of the Covid-19 pandemic were dashed,” Reuters reported.

But those events practiced social distancing; Daytona seats 100,000 normally and Raymond James Stadium in Tampa, Fla., can hold as many as 75,000. Rangers fans were cheek by jowl.

A crowd of 15,000 arrives for the mixed martial arts bouts, and Dana White, the Ultimate Fighting Championship president, declares it the first sold-out indoor event since the pandemic began.

“We’re an open state, and we want to be able to allow people to make decisions for themselves about what they want to attend,” Gov. Ron DeSantis said at a news conference for the event. “Quite frankly, this event is good for Florida.”

“As far as the fans, you wear a mask or do not wear a mask. It’s up to you, it’s your decision,” White said. A quarter or fewer of the fans decided to do so, those at the event reported.

Australia gets its elusive record as the attendance cap at the Melbourne Cricket Ground rises to 85,000, and 78,000 turn up for this Anzac Day game.

In nonsports news, New Zealand, which, like its neighbor, had the virus almost under control, had set a record of its own the day before: the largest concert since the pandemic began, as 50,000 grooved to the sounds of Six60 in Auckland.

The Kentucky Derby returned with 51,000 spectators in 2021 after racing in front of empty stands in 2020. Credit…Christian Hansen for The New York Times

The U.S. record falls again as 51,000 spectators, about a third of the normal crowd, turn up. In 2020, the stands were empty. “What a difference a year makes,” Gov. Andy Beshear said at the track. Masks were required when not eating, although many ignored the rule.

A real record falls, not merely a “since the pandemic” record. Over 73,000 turn up for this fight, the largest indoor boxing crowd in American history. Yes, indoors. The roof of AT&T Stadium was closed for the event.

“This is the biggest live event in the U.S., post-pandemic,” the promoter Eddie Hearn said. “And boxing is bringing it back. Normally it would be American football or N.B.A. This is boxing. Saturday night, the world will be watching. It’s so encouraging.”

Most of the records that have organizers so excited are about to be erased. The Indianapolis 500 is expected to have up to 135,000 fans, about 40 percent of its capacity. The track says it will require masks and check temperatures at entry.

“Our fans mean everything to us, and we can’t wait to welcome them back home again for this year’s Indy 500,” said the track president, J. Douglas Boles.