The Yankees ended their skid not with an offensive breakout but with key runs that involved no contact.

Atlanta Braves reliever Nate Jones threw a tiebreaking wild pitch with slumping Clint Frazier at the plate in the eighth inning and forced in a run with a four-pitch walk to Mike Ford, giving the Yankees an unusual 3-1 victory Tuesday night that stopped a five-game losing streak.

“We got kicked in the mouth a little bit last week. I think it was kind of an eye-opener for us,” said left-hander Justin Wilson, who stranded the bases loaded in the seventh by getting Freddie Freeman to ground into an inning-ending force out. “But we’ve got a bunch of grinders. We’ve got guys that want to win like I’ve never been on a team that wants to win so bad.”

Gio Urshela hit a tying home run in the fifth inning off Charlie Morton and the Yankees won with five hits, which left their four-game total at 16. The team went 2 for 8 with runners in scoring position, but the last-place Yankees improved to 6-10 and avoided what would have been their worst start since 1972.

Consecutive third-inning doubles by Guillermo Heredia and Ehire Adrianza put the Braves ahead against Jameson Taillon, making his third start since Tommy John surgery in August 2019. Taillon lowered his E.R.A. from 7.56 to 5.40, allowing one run and four hits in five innings with five strikeouts and a walk.

“I want to be the guy who’s going to help us get back in the win column. So going out there, I kind of had that attitude,” Taillon said. “That kind of just put a little fire under me to try to go out there with some energy tonight.”

Morton allowed one run and three hits in six inning s, giving up a tying 437-foot home run to Urshela in the fifth that landed on the netting above Monument Park in center.

“Every game is important,” Urshela said, “every win, it’s important to get that confidence back.” 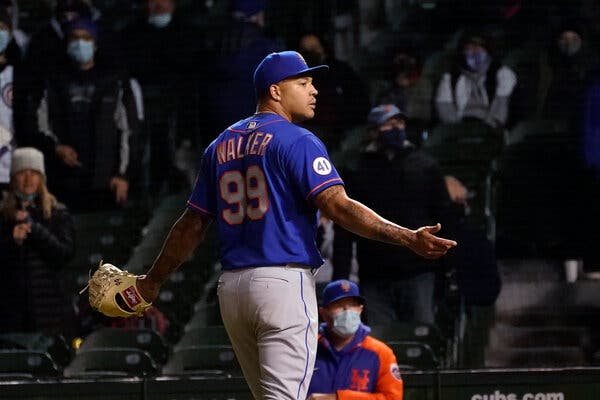 Taijuan Walker of the Mets was ejected when he expressed frustration with the umpire’s strike zone on his way out of the game.Credit…Charles Rex Arbogast/Associated Press

Jake Arrieta delivered. Eric Sogard scored on a daring dash. Jason Heyward set up another run with a nifty slide.

On another tough night at the plate, the Chicago Cubs made just enough plays to eke out a win.

Arrieta pitched five effective innings Tuesday and Craig Kimbrel escaped a jam in the ninth, sending the Cubs to a 3-1 victory over the Mets.

“Really nice win when we had to scrap for some hits,” manager David Ross said.

Arrieta (3-1) allowed one run and three hits, struck out four and walked three. Wearing short sleeves on a cool, clear evening — the game-time temperature was 36 degrees — he also contributed to two runs at the plate.

“Battled, did a nice job of limiting damage,” Arrieta said. “Had some walks in there, but still was competitive throughout.”

Sogard had two hits, scored twice and drove in a run to help Chicago rebound from Sunday’s 13-4 loss to Atlanta. Sogard was inserted into the lineup when David Bote was scratched with an upset stomach.

The Cubs had just four hits and struck out 12 times, including four for Javier Báez. Hampered by early offensive trouble, the reigning NL Central champions have won just three of their last nine games.

“Doing the small things, trying to push across some runs, we did that tonight,” Ross said.

J.D. Davis homered for the Mets, but also committed two throwing errors at third base — including one that brought home Chicago’s first run. The Mets had won five of six.

Taijuan Walker (0-1) matched his career high with six walks in three and two-thirds innings, then was ejected by John Libka when he expressed frustration with the umpire’s strike zone on his way out of the game. Walker was charged with two earned runs and two hits.

“After that third inning, I just kind of lost the feel for the strike zone and was kind of all over the place,” Walker said.

Second-year Mets Manager Luis Rojas also was thrown out by Libka after Michael Conforto struck out looking in the sixth. It was the first career ejection for Rojas.

“The only thing you ask for is consistency. So that’s where it came from,” Rojas said. “Personally, I thought Taijuan got squeezed a little bit by the home plate umpire, and I thought that we were getting calls that were out of the zone.”

Juan Soto of the Washington Nationals will miss at least seven games after landing on the injured list with a strained left shoulder.Credit…Alex Brandon/Associated Press

“We thought, ‘Hey, we’re not going to take any chances with him,” Nationals Manager Dave Martinez said. “We’ll try to get him right as quick as possible.”

Martinez said Soto had been dealing with an issue in recent days, complaining about a tight triceps and soreness.

The team decided to have the 2020 N.L. batting champion get an M.R.I. exam Tuesday morning. The decision to sideline Soto came less than an hour before Washington’s 3-2 victory over the St. Louis Cardinals on Tuesday night began.

Unknown at this point: Exactly how long Soto will be out.

If Soto, 22, is able to return on the first day allowed, April 30, that would mean missing just seven games, because Washington has a few days off coming up on its schedule.

“Hopefully,” said shortstop Trea Turner, who usually bats in front of Soto, “we can play well and kind of survive without him.”

The club also said that outfielder Yadiel Hernandez was being recalled from its alternate training site.

Soto is batting .300 with two home runs and eight R.B.I. this season. He led the N.L. in on-base plus slugging percentage in addition to average a year ago and finished fifth in the league’s Most Valuable Player Award voting.

The Nationals began the day in last place in the NL East with a 5-9 record, thanks in large part to problems with their starting rotation.

Stephen Strasburg is on the I.L. with right shoulder inflammation, Jon Lester began the season on the Covid-19 injured list and has yet to make his Nationals debut, and Max Scherzer is 0-1 heading into his scheduled start Wednesday against the visiting Cardinals.

Naomi Osaka Says She Won’t Talk to Journalists at the French...