Washington Capitals forward Tom Wilson, according to some of his peers, is a menace. A bully. A punk. A goon. He is reckless, vicious, dirty, and bad for hockey. He might have fit in 30 years ago, but his conduct — illegal checks and high hits, at the price of five suspensions in his career — has no place in today’s safety-conscious N.H.L.

Tom Wilson, according to others, is a really good dude. A leader. A unifying force. An excellent teammate. He is thoughtful, conscientious, attentive, and great in the Capitals’ locker room. He would have fit in 30 years ago, but his style — brawny and physical, with top-six skill and speed — is all the more coveted now as the league’s players trend toward smaller and faster.

In a brutal sport full of paradoxes, no one tilts toward the extreme more than Wilson, a 6-foot-4, 225-pound pile of dynamite whose antics (or efforts) seem to elicit rage (or respect) darn near every game. His latest misadventure, a post-whistle scrum with two Rangers on May 3, earned him 14 of his league-leading 96 penalty minutes this season, a maximum $5,000 fine from the department of player safety and indignation across hockey’s empire over another incident that reinforced his standing as the N.H.L.’s chief villain. He also had a goal and an assist that night, as he surged toward the most points per game of his career (0.70).

As Washington prepares to open the playoffs Saturday at home against the Boston Bruins, Wilson’s reputation trails him like exhaust fumes, even as he professes remorse; even as others engaging in dangerous or irresponsible play go unscorned and unpunished; and even though every other team would pursue him at once if he became available — which he won’t.

As a winger who can skate on a line with the stars Alex Ovechkin and Nicklas Backstrom and also protect them, Wilson, 27, is too valuable to the Capitals, who for nearly a decade have known what few are willing to admit about him: He defies easy classification. 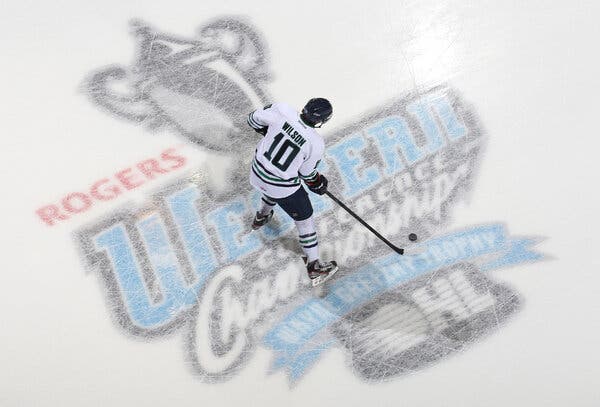 Tom Wilson was big. Maybe 6-foot-2, 190 pounds, a pro build already, when at 16 he thundered into the Ontario Hockey League in 2010. “I shook his hand the first time,” said Danny Vanderwiel, a teammate on the Plymouth Whalers, “and thought he was a grizzly bear.”

Competing for ice time with older players, Wilson knew how to get it. As goalie Matt Mahalak recalled, in one of Wilson’s first games he leveled three players, forced a turnover, had a shot on net, prowled the goal mouth for a rebound and got into a fight — all on his opening shift.

The O.H.L. is a top major junior league, but few of its players, if any, matched Wilson’s combination of size, strength and skill. Superb on the forecheck, he intuitively understood how a play would unfold, enabling him to reach the puck before the defenseman.

“They’d almost get like a deer-in-the-headlights kind of look and see this big body coming at them,” said Brian Sommariva, who was Plymouth’s assistant general manager at the time. “He was taking the exact same route they were taking. Next thing you know, there’s a large collision and a turnover.”

Wilson relished those large collisions, though one in particular — a clean hit, Sommariva said, that knocked out a smaller player — left him visibly shaken. On the Plymouth team, players scratched for games were assigned to track statistics, including hits, earned when a player separated an opponent from the puck or checked him out of the play altogether. Invariably, Wilson rated near the top.

But coaches, sensing he could score goals and set them up, demanded more. The Capitals, who drafted him No. 16 overall in 2012 to add some skilled thump to their lineup, wanted that, too.

So in Plymouth, Wilson devoted extra practice to stickhandling, skating and redirecting shots, trying to emulate the Detroit Red Wings forward Tomas Holmstrom. His production soared, his penalty minutes dropped, and he logged time on the Whalers’ power-play unit. When a fight broke out, Plymouth’s coach, Mike Vellucci, admonished Wilson for getting involved: He was too important to lose to injury or suspension.

His time in Plymouth ended with a postseason scoring binge in 2013 — 17 points (and 41 penalty minutes) in 12 games. After barely a week in the minors, Wilson joined the Capitals for Game 5 of their conference quarterfinal matchup against the Rangers. They knew that, at 19, Wilson could mesh on their fourth line, and he did. He clicked even better with his new team.

The Teammate Every Player Wants

By many accounts, Wilson, center, is beloved by his teammates.Credit…Rob Carr/Getty Images

Tom Wilson was curious. Curious about the unwritten code of conduct, careful not to offend veterans with words and deeds. Curious about his teammates, their interests, their families and their dinner plans. He asked smart questions. He listened.

Alzner called Wilson one of the two best teammates he’d ever had, at any level — Capitals forward T.J. Oshie being the other. In Washington’s dressing room, Wilson’s charismatic benevolence is a force multiplier that unites players regardless of age, nationality or marital status. He defends teammates on the ice and then bonds with them off it. At team meals, he is as likely to eat with rookies as with stars. On the road, he organizes dinners, mindful to include younger and newer players.

“He’s a major connector in that locker room,” said the former assistant coach Reid Cashman, “and why it’s so close.”

Cashman joined the Capitals’ staff in July 2018, a month after the team won its first Stanley Cup. It was his first N.H.L. job, and for an outsider, the room was a bit intimidating. The team was tight, cohered by catharsis, and an invisible boundary separated those who had hoisted the chalice from those who hadn’t. Wilson, one of the first players to introduce himself, eased Cashman’s transition.

That season, Wilson would be Washington’s nominee for the league’s King Clancy Memorial Trophy given annually to a player who has made outstanding humanitarian and community efforts. Wilson worked with the Make-A-Wish Foundation, among other groups.

So much so, Cashman continued, that he could envision Wilson succeeding Ovechkin, 35, as Washington’s captain. When told this, Alzner agreed — “he’s the heartbeat of the team” — but offered a caveat. He wondered whether it would actually happen, because of Wilson’s, you know, reputation.

Wilson fought Bruins center Trent Frederic in March. The Capitals will meet Boston in the first round of the playoffs.Credit…Paul Rutherford/USA Today Sports, via Reuters

Tom Wilson was hated. As far back as his rookie season, when he plowed Brayden Schenn headfirst into the boards. The venom spewed then, as it did when Wilson rammed Brian Campbell from behind, in 2015. As it did when he walloped Robert Thomas late, in 2017. And just nine days later, when he boarded a defenseless Sammy Blais. And in 2018, when his shoulder bashed Zach Aston-Reese’s head. Five months later, Wilson flattened Oskar Sundqvist at mid-ice and received a 20-game suspension that would be pared to a still significant 14. It was his fourth suspension in 105 games.

The totality of the carnage inflicted by Wilson — no one has amassed more penalty minutes over the last eight seasons, according to Hockey Reference — has elicited criticism from every stratum of the sport, plus all corners of social media. When Alzner signed with Montreal before the 2017-18 season, his new teammates called Wilson unprintable things. It was his duty, Alzner said, to change their minds, much as he does on Twitter, sending detractors direct messages saying that Wilson is not an outlaw and that they would buy his jersey if he played for their favorite team. Reluctantly, they concur.

Yet Wilson’s pattern of behavior is disturbing. The evidence is compelling. The video clips do look bad. The contact, in some cases, is indefensible. It’s natural to wonder why someone as scrutinized as Wilson, who has met with the league’s department of player safety and promised to adapt, and has also expressed concern for those he has injured, continues to push the limits. Then again, it’s impossible to assign intent. For many, it’s far simpler to make sweeping proclamations and distill Wilson into digestible terms. Like a villain.

In hockey, 10 players chase after a puck as fast as they can skate, crashing through whatever stands between them and it. A nebulous standard distinguishes what is tolerated from what isn’t, and the slightest head shift can turn a fair hit ugly in a split second. Wilson has studied his transgressions and has said that he has learned from each suspension.

After his hit on Sundqvist, which Cashman said Wilson watched countless times, he worked with two Washington assistants, Scott Arniel and Blaine Forsythe, on not leading with his stick: If his stick remained on the ice, they told him, then his arms and elbows would stay down, too.

After that Wilson, playing hard but clean, avoided punishment until March, when he was docked seven games for drilling Brandon Carlo of Boston. Then came the events of May 3, when Wilson punched two Rangers forwards, Pavel Buchnevich and Artemi Panarin, and nearly body-slammed Panarin, — who had jumped onto Wilson’s back — and threw him headfirst onto the ice.

The Rangers, in a statement, denounced Wilson’s “horrifying act of violence.” Wilson contacted Panarin. The Capitals, as they have done many times over the last eight years, reminded Wilson to play aggressively but also to remember that everyone was watching him.

How Wilson Fits, and Doesn’t, in Today’s N.H.L.

Wilson has made the most of his size.Credit…Pool photo by Bruce Bennett

Tom Wilson was stuck. Between the player people think he is and the player he wants to be. Between the era when unfettered violence reigned and one in which enforcers are outmoded.

“If you put Tom Wilson back in the ’90s, the early ’80s, he’s just one tough son of a bitch and no one thinks twice,” said the former enforcer Stu Grimson. “But the game has evolved.”

Hockey has indeed evolved. Fighting has faded. Bowing to a range of factors — concussion science, progressive attitudes about health and the spateof former tough guys who died with C.T.E., the degenerative brain disease associated with repeated hits to the head — the N.H.L. has enacted rules against targeting above the neck.

There’s a financial component at play, too: Fans pay to watch Connor McDavid, Auston Matthews, Nathan McKinnon dazzle on the ice, not for them to miss time because of a sketchy hit.

Wilson is an outlier in a crowd of alphas. Much as smaller, speedier quarterbacks are flouting convention in the N.F.L., smaller, speedier players in the N.H.L. have altered the art of roster construction. Power forwards, though hardly extinct, no longer populate every team’s roster. Among his brethren, Wilson is the most conspicuous, and one of the more effective.

Extrapolating the stats he recorded in this truncated season over 82 games, he would have finished with 58 points and 167 penalty minutes. Only four times has a forward reached those numbers in the last 25 years, according to Hockey Reference.

“They don’t love that he gets suspended and they don’t love that he hurts people sometimes, but he’s so unique, the type of player he is,” Alzner said of the Capitals. “There’s some guys that you could probably turn the page on if they’re not conforming to what the league wants, or what a team wants, but Tom’s not that guy.”

And so Wilson plays on. In a league that would rather he play differently. For a team that likes him just the way he is.