Lauren Ash grew up in a baseball household in Belleville, Ontario, a two-hour drive from Toronto. When the Blue Jays won their first World Series in 1992, a nine-year-old Ash became a lifelong fan. She moved to the city at 18 and sitting in the 500-level at SkyDome with friends became a ritual. Getting the chance to throw out the ceremonial first pitch at a game in 2014 was a career highlight.

“For my family, it was like I had won an Oscar,” Ash said, laughing. “When I called my mom to tell her, she said: ‘This is it. This is what you’ve worked for.’”

Ash was filming the first season of her NBC comedy “Superstore” in 2015 when the Blue Jays returned to the postseason for the first time in 22 years. She hid her phone on the set and listened to the M.L.B. app for updates during Game 5 of an American League division series against the Texas Rangers, eventually rushing to her co-star Ben Feldman’s trailer in time to watch Jose Bautista’s infamous bat-flip home run happen live.

SkyDome, which was renamed Rogers Centre in 2015, has not hosted a regular-season game since 2019. Since then, the Jays have been baseball’s vagabonds, playing in their Class AAA affiliate’s stadium last season before starting this year at their tiny spring training facility in Florida. 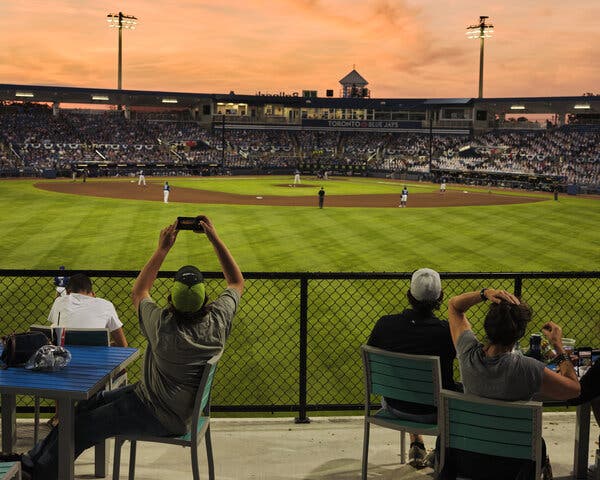 The Blue Jays played their first 21 home games of the season at TD Ballpark in Dunedin, Fla. The stadium has a capacity of 8,500 but the crowds were limited to around 1,500 per game.

But cozy stadiums, capacity restrictions and the closed U.S.-Canada border couldn’t stop Blue Jays fans like Ash — in two-dimensional form, at least — from being there to support the team.

Like many clubs, Toronto introduced a fan cutout program. For sixty dollars Canadian (roughly $45 in the U.S.), fans could submit a photo of themselves to be included as a photo in the stands. A portion of each purchase goes toward a Blue Jays charitable foundation.

Some of those corrugated plastic cutouts cheered on the team during the 2020 season at Buffalo’s Sahlen Field, and others spent the first two months of this season in the stands at TD Ballpark in Dunedin, Fla. The team’s stay at their tiny 8,500-seat stadium in Dunedin will come to an end, however, with Monday’s game against the Tampa Bay Rays.

Entering Monday’s final game in Dunedin, the largest home crowd the Blue Jays have had this season was 1,613.

The cutouts — some of which represent famous Canadians but most of which are simply everyday fans — will make their way north as the team resumes its 2021 schedule in Buffalo. There is still no word on whether the team will be allowed to return to Canada this season.

For now, because of travel restrictions and the small capacity of the team’s temporary ballparks, the cutouts will have to suffice for many of the team’s fans.

Ash signed up for one right away. She went so far as to ask her boyfriend to scout locations in her Los Angeles home to find good lighting for a photo shoot.

“Symbolically, I felt like I needed to have a presence at the ballpark,” she said. 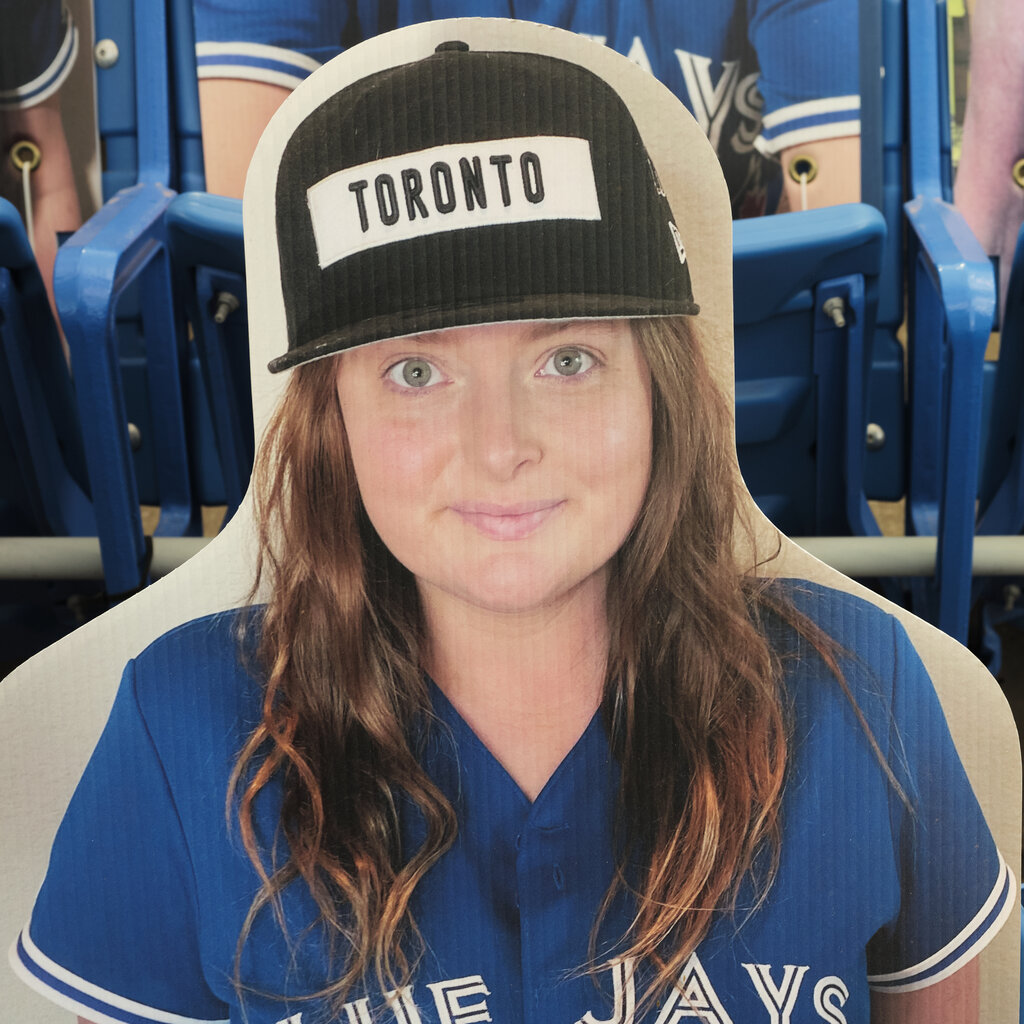 ‘Symbolically, I felt like I needed to have a presence at the ballpark.’

Lauren Ash, an actress known for her role on “Superstore.”

The cutout program has provided some opportunities for fans who would have been left out otherwise.

Christina Dodge, the box office manager for the Jays, was vetting cutout photos recently when lockdown fatigue hit. She started to miss the long days at the ballpark and thought about her nieces and nephews.

“I realized so many other kids their age were probably trying to understand what is happening in the world right now,” she said.

Because of its proximity to Tampa Bay, TD Ballpark was inundated by Rays fans for a series between the teams.

The team’s cutout program also offered an opportunity for fans like Dave Capstick, born in Etobicoke, Ontario, and currently living in New Glasgow, Nova Scotia, to have a physical presence at the ballpark that wouldn’t have been able to in the past.

Capstick used the program as a way to put his 10-year-old daughter, Nya, in the stands. “It’s nice to see ourselves at the game,” he said.

The Jays even crowdsourced fan suggestions for a cardboard celebrity row. Imagine the front-row at a Lakers game, but Canadian — and made of corrugated plastic.

Vladimir Guerrero Jr., far left, is having a breakout season, which has been bittersweet for fans in Canada who can’t attend games.

A Toronto native and longtime fan, Reid called the Blue Jays a “major distraction” on the “Schitt’s Creek” set in Goodwood, Ontario, a 45-minute drive from Toronto. Eugene Levy regularly streamed playoff games between takes during the team’s 2015 playoff run, and assistant directors, writers, and the wardrobe department followed the team closely.

Reid admits it was bittersweet to see his cutout.

“I would love to be sitting in those seats,” he said. “I couldn’t help but be a little bit jealous of my cardboard self.”

What makes it more difficult is how promising the Jays look this season, regardless of the team’s five consecutive losses heading into Monday’s game. 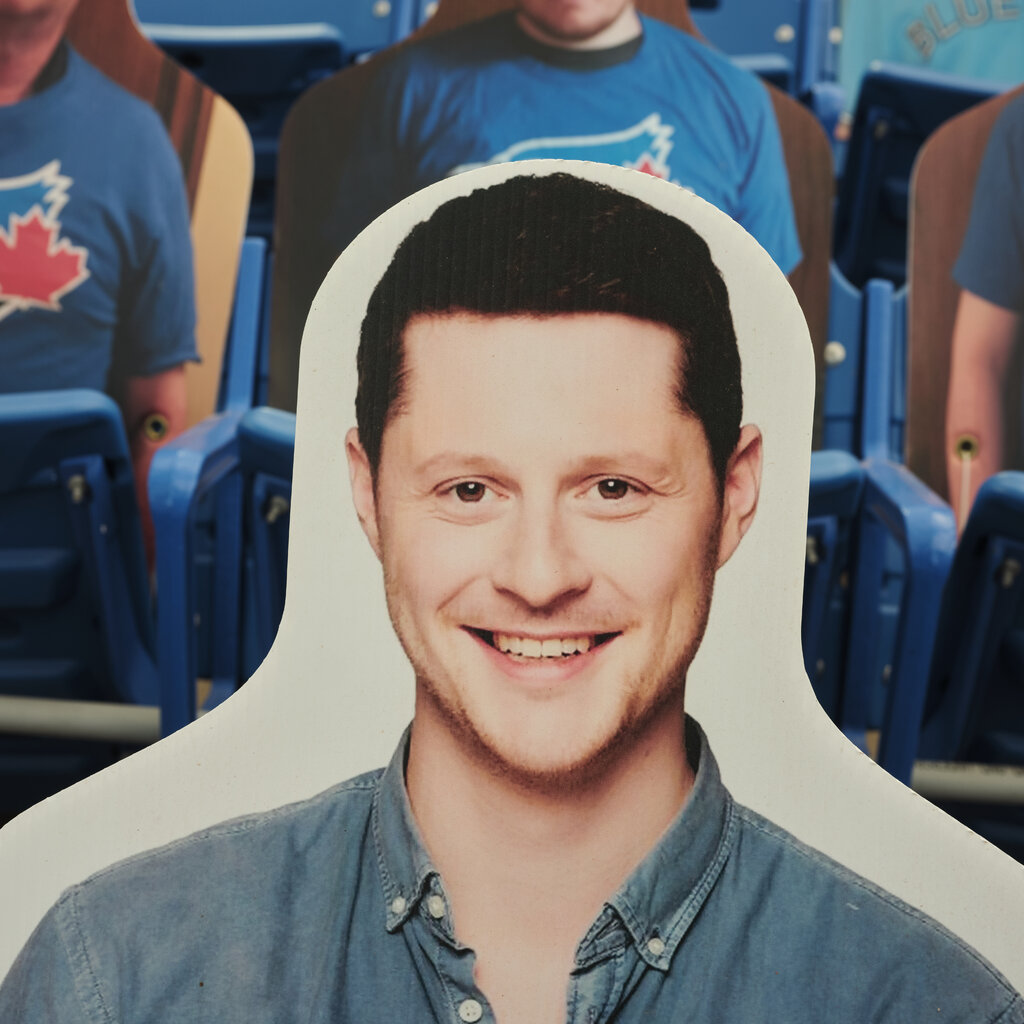 ‘I would love to be sitting in those seats. I couldn’t help but be a little bit jealous of my cardboard self.’

Noah Reid, an actor known for his role on “Schitt’s Creek.”

Vladimir Guerrero Jr. is one of the best hitters in the league. The team added the free-agent George Springer to an already potent lineup, and it has the ace Hyun-jin Ryu leading the rotation.

Reid says he will find a way to Buffalo if the Blue Jays play in the World Series there.

“I’m holding an American passport,” he said, “so I’ll be lining up at the border to cross the Peace Bridge.”

For now, the team and its fans are longing for the day when the Blue Jays can head home to Canada.

Toronto last hosted a regular season game at Rogers Centre in September 2019, when the Blue Jays defeated the Tampa Bay Rays, 8-3, in their season finale. Lesley Mak was one of the 25,738 fans in attendance, and she remembers bidding an emotional farewell to first baseman Justin Smoak, who signed with the Milwaukee Brewers in the off-season.

“I didn’t know it would be my last game too,” Mak said.

Teoscar Hernandez is one of the exciting young Blue Jays players who fans like Lauren Ash and Noah Reid are looking forward to seeing in person at some point in the future.

She attended around 30 Blue Jays games each season before the pandemic and has a cutout in the stands this year. Mak has organized Zoom live-game viewings with friends in the past year but admits it doesn’t compare to a warm summer day watching the team on the Flight Deck — a center-field section located underneath the stadium’s main video board.

“I’m an extrovert,” Mak said. “When I see baseball players hugging each other after a win, it makes me miss hugging my friends.”

“I miss the ushers,” he added. “I miss talking to them while waiting to get to my seat and asking how their families are doing.”

Ennis Esmer is still wary of large crowds — “some people just don’t know how to act” — and says he won’t return to the ballpark soon. But Esmer, an actor known from shows like “Blindspot” and “Red Oaks,” concedes he misses the adrenaline rush of watching a closer jog out of the bullpen in the ninth inning and eavesdropping on fans in his section pretending to be baseball experts.

The Blue Jays will head to Buffalo for the foreseeable future, but TD Ballpark proved to be a worthy home for 21 games and the team will be back for spring training next year.

The pandemic has stripped many baseball fans of their routines. Ash found some semblance of normalcy by returning to work. Last September, the cast of “Superstore” returned to the set to film the show’s final season under strict health and safety protocols. Ash also started a podcast titled “True Crimes and Cocktails” with her cousin Christy Oxborrow.

But watching the Jays at home, rather than at Rogers Centre is a reminder that life hasn’t returned to normal just yet.

She is looking forward to returning to Toronto soon and hopes she can sub in for her cutout at a Blue Jays game.

“I love the pageantry,” Ash said. “It’s similar to a movie theater experience. There isn’t a bad seat in the house. Even if you’re sitting a million miles away, it’s still an experience. You still feel invested. You still feel like you’re a part of it.”

The Super League Thought It Had a Silent Partner: FIFA