You will not find the word Concacaffy in any dictionary, but any soccer fan in North America knows what it means and how to use it in a sentence.

Even before the United States men’s national team beat Mexico, 3-2, on Sunday night to win the Concacaf Nations League final on Sunday, the word has been tossed around quite a bit. For fans of the two teams — the twin poles of North American soccer dominance and hand-wringing — the whole night was thrilling and frustrating and exhilarating and maddening.

It was also pure, unfiltered Concacaf. Missed it? Here are the highlights. And the lowlights. 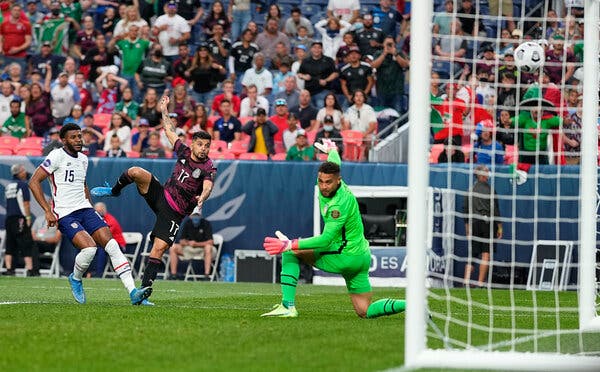 A mistake! And a goal for Mexico.

Mexico’s night started wonderfully, with a sizable advantage among fans in the stands in Denver and an early goal. It came courtesy of a giveaway by the young United States defender Mark McKenzie — who made a bad decision in his own penalty area. Just over a minute into the game, Jesús Corona pounced on the error, and Mexico was ahead, 1-0.

Mexico’s Héctor Moreno doubled the lead in the 24th minute, threatening to send the United States into a dangerously deep hole. But the referee, John Pitti of Panama, is called to the video-assistant review monitor for a second look at Moreno’s positioning, and he rules the goal was offside.

Relief for the U.S.! Reyna gets one back.

Gio Reyna corralled a header off the post and slammed in the rebound in the 27th minute.Credit…Isaiah J. Downing/USA Today Sports, via Reuters

Moments later, the U.S. got to breathe an enormous sigh of relief when three of its brightest young stars teamed up to tie the score.

Christian Pulisic started the play, curling in a corner kick toward midfielder Weston McKennie. McKennie won the free ball and sent his header past Mexico’s goalkeeper, Memo Ochoa, but the shot hit the far post. The carom brought it right back into the goal mouth, though, where Gio Reyna turned it effortlessly back into the net. Tie game.

In the stands, Reyna’s parents, Claudio and Danielle — who both played for the national team — share a hug.

Late Drama! Mexico retakes the lead, and the U.S. answers.

The second half was when the game got interesting. The Americans made some tactical changes and started to hold their own, and McKennie kept firing headers at Ochoa, who kept managing to keep them out. United States goalkeeper Zack Steffen was doing the same at the other end until he scrambled out to break up a chance and, untouched, went down with a leg injury. He couldn’t continue, and was replaced by Ethan Horvath in the 69th minute.

And this is when the game got really fun.

The 20-year-old Mexico star Diego Lainez appeared to win the game in the 79th minute when, seconds after coming on as a substitute, he took a pass on the right, nudged it left and ripped a shot past Horvath to give Mexico a 2-1 lead.

But that wasn’t the exclamation point it seemed. Within minutes, the game was even again after McKennie — thwarted by the post and by Ochoa for most of the night — finally sneaked a header over the line.

The game was delayed for about three minutes when the referee stopped play to enforce Concacaf’s anti-discrimination protocols. The rules are in place to address everything from racism to homophobic chants, and they nearly stopped a Mexico-U.S. game in New Jersey in 2019.

Mexico’s federation, its stars and its coaches have pleaded with their fans for years to stop the chant that has caused the most trouble, but it is still a common refrain at the team’s games at home and abroad.

“Once again, I insist — I asked you guys to stop with that screaming,” Ochoa said during a news conference ahead of the final, and after the team’s win over Costa Rica in the semifinals had been paused because of the protocols. “It doesn’t help us at all. It is affecting us as a matter of fact.”

Ochoa pleaded with fans to not repeat the chant in the final “and in the upcoming games in the Gold Cup, in the qualifiers, in Mexico, or abroad,” noting that the team could face escalating punishments, and even ejection from tournaments, if soccer officials ever follow through and enforce its most serious punishments.

“All the team players are asking you, please, because in the long run, this could affect us.”

Still, for the second time in this tournament, a Mexico match was stopped to address it.

The players gathered at midfield during the delay, and an announcement — a warning that the game could be called off — was read over the stadium loudspeakers. Play soon resumed, but the trouble wasn’t over.

As is often the case, bottles and cups became projectiles on several occasions, most notably after the United States celebrated goals, and as players like Pulisic lay on the grass to waste time late in the match.

At least one missile sent Reyna down in a heap, clutching his head, after a goal, and another later hit a Mexican player square in the face.

If you weren’t hooked by now, the game was about to go full Concacaf.

Early in the second extra session, Pulisic drove into Mexico’s penalty area and went down under a hard challenge from two defenders. On the ground, he waved his arms in the international symbol for “Hey that was a penalty!” but Pitti ignored him. Until, that is, he got a nudge to review the play on the sideline monitor.

“It plays with your head a little bit when it takes long for the ref to decide whether it’s a PK or not,” McKennie said.

A second look — interrupted briefly so he could red card Mexico’s coach, Tata Martino, for throwing his arm around the referee’s shoulder as he peered at the screen — confirmed for Pitti that the foul was a penalty. He made a dramatic signal to award it, and Pulisic stepped up and buried it. U.S. 3, Mexico 2.

But the final, and Mexico, was not done. Mexico won a corner in the 119th minute and stroked in a cross. A header appeared to hit McKenzie on the arm, and while Pitti did not appear to see it, every Mexican player did. Back to the review screen Pitti went, and off to the spot went Mexico. By this point, even the announcers were laughing.

The problem, at least for Mexico, was the job wasn’t done yet. Andrés Guardado stepped up to take the penalty, and tie the score again, and his attempt wasn’t bad. But Horvath had guessed correctly and, diving to his right he pushed it aside.

After that, all that was left was bottles thrown from the stands, 11 minutes (11!) of added time and a final whistle that delivered the United States — which had started the inaugural Nations League final with one of its youngest lineups ever — its first trophy since 2017, and its first win over Mexico since 2018.

The confetti flew where the bottles had not, the fans (at least those there to support the U.S.) cheered and the American players picked up their medals.

And then they braced themselves to possibly do it all over again in a month, when Mexico and the United States will be expected to tangle again in Concacaf’s regional championship: the Gold Cup.

Tyler Adams, who taunted the Mexico crowd as it threw bottles, and Gio Reyna, who took one to the head.Credit…John Leyba/USA Today Sports, via Reuters