Buzzy rookies, reshuffled stars and new interest in women’s basketball after a thrilling N.C.A.A. tournament have positioned the W.N.B.A. to open its 25th season this week with a captive audience as it continues to lead in social justice efforts among professional sports leagues.

Put it all together, W.N.B.A. Commissioner Cathy Engelbert told The New York Times, and “the future of the game is bright.”

“Rosters are stacked with incredibly talented veterans, and the last few rookie classes are bringing a whole new element to the fierce competition within the league,” she said.

Fresh off N.C.A.A. tournament highs and lows, Charli Collier, Kiana Williams and Aari McDonald are among a class of rookies who are set to make waves against longtime contenders like Sue Bird, Breanna Stewart and Candace Parker. And they are hungry for it.

McDonald, who led the Arizona women’s basketball program to its first N.C.A.A. title game appearance last month, will make her W.N.B.A. debut with the Atlanta Dream on Friday night against the Connecticut Sun. Her eyes are on the W.N.B.A.’s career leading scorer.

“Diana,” McDonald said of the Phoenix Mercury’s Diana Taurasi. “I can’t wait to play against her.”

Taurasi has spent her entire career with one team, and until this season Parker could have said the same. But her move from the Los Angeles Sparks to the Chicago Sky as a free agent in the off-season is one of the biggest story lines of the new season.

Another is the transformation of McDonald’s team, the Dream. 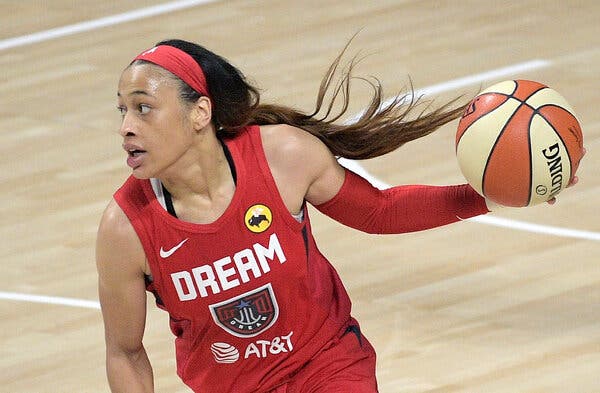 Chennedy Carter and the rest of the Atlanta Dream are under new management this season.Credit…Phelan M. Ebenhack/Associated Press

Mike Petersen, the interim coach who took the helm when Nicki Collen left for Baylor this month, said McDonald was “a part of what will allow this team to play in a very nontraditional way and have some success.”

The Dream are also under new management, with players having spent last season protesting against the team’s previous owner, the former Georgia senator Kelly Loeffler, after she spoke out against the Black Lives Matter movement. The team was sold in February.

That protest was one of several that defined the 2020 season in a bubble environment — known as the “wubble” — at IMG Academy in Bradenton, Fla., to help prevent the spread of the coronavirus. The season was dedicated to Breonna Taylor, a Black woman who was killed by the police in Louisville, Ky., in March 2020. Players wore shirts bearing her name as part of the Say Her Name campaign, which focuses on police violence against Black women and girls, and the league launched its Social Justice Council, which coordinated cross-league initiatives.

The W.N.B.A. is continuing its social justice efforts from last season, when it focused on Breonna Taylor.Credit…Chris O’Meara/Associated Press

“I think they’ll take the themes that they’re going to be focused on, around health equity and civic engagement and voting rights, into their communities and feel a little more connected to it this year,” Engelbert told reporters recently, “whereas last year being in Florida in one place they might not have felt connected to the community as closely as they would have liked to.”

Players and officials said that the emphasis on social justice would carry over to this season, with a particular focus on health equity, L.G.B.T. issues and voting rights.

“Similar to the Say Her Name campaign, these issues directly affect literally who we are,” Layshia Clarendon, a Liberty guard who is one of the leaders of the league’s Social Justice Council, said this week. “We’ve been young Black girls who grew up, who are often underrepresented in our communities.”

Clarendon said the health focus encompasses vaccines and public health and safety topics like policing. “All of these issues overlap because they’re all intersectional,” they said.

Allison Barber, president of the Indiana Fever, said teams were trying to help players be both “amplifiers of a message” and “advocates of a mission.”

“You need both things to change the world,” she said. “But our players want to both be amplifiers of messaging around social justice and also really roll their sleeves up and dig in deep and take action to be advocates for the mission.”

Among those messages will be inequities between men’s and women’s sports, a topic recently highlighted by differences between the setups of the men’s and women’s college basketball tournaments. The men initially had significantly better weight rooms, meals and facilities than the women, and more advanced coronavirus testing.

Coverage of the tournament drew a wide audience, something that players expect to continue through to the professional league. The W.N.B.A. draft was one of the most viewed in the past 15 years, and the N.C.A.A. women’s championship game between Arizona and Stanford, which was played on Easter Sunday, garnered the most viewers since 2014.

Liberty guard Sabrina Ionescu said she was looking forward to playing in front of fans this season. She missed all but three games last year with an ankle injury.Credit…Phelan M. Ebenhack/Associated Press

Teams will play 32 games this season, 16 at home and 16 away, in front of a limited number of fans, depending on guidance from local health officials. The league will also go on hiatus from July 15 to Aug. 11 for the Tokyo Olympics. The season begins Friday when the Liberty host the Fever at Barclays Center, in front of a reduced-capacity crowd.

Whether they were returning to defend their titles or new to the league, players said they were looking forward to real fan noise.

“It definitely feels different being in New York and playing in front of fans or families being in attendance,” said Sabrina Ionescu, the Liberty guard whose rookie season last year was cut short because of a severe ankle sprain in her third game. “It kind of feels like my first season — it basically is.”

And all in new uniforms that center on stories from teams’ home states, including a “Stranger Things” theme for Indiana and a glass-ceiling shattering Space Needle for Seattle.

“It was fun to see how a uniform could really draw in a whole new group of fans,” Barber said. “Even our governor was like: ‘I want my jersey. I love this show, and this jersey is awesome.’”

For the Storm, this season is also about trying to repeat as champions. They have a rematch at home on Saturday with the Las Vegas Aces, whom they beat in three games for the 2020 title. Bird and Stewart will be up against A’ja Wilson, who won the Most Valuable Player Award in 2020.

“We have the same expectations that we always have,” Stewart told reporters this week.