The W.N.B.A. begins its 25th season on Friday with the returns of some big-name veterans and the debuts of promising rookies.

“Rosters are stacked with incredibly talented veterans, and the last few rookie classes are bringing a whole new element to the fierce competition within the league,” W.N.B.A. Commissioner Cathy Engelbert told The New York Times.

Below, our reporters tell you what to expect this season in the Western Conference. 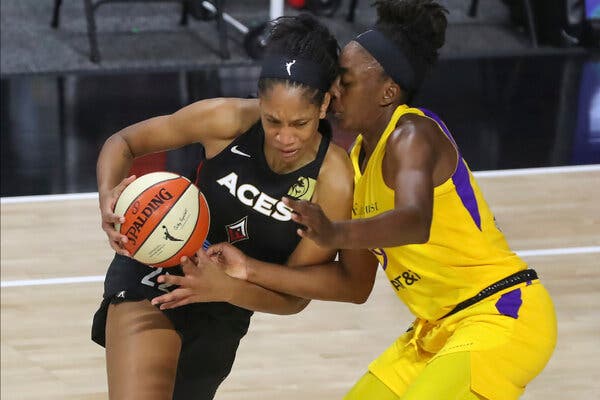 A’ja Wilson of the Aces won the Most Valuable Player Award in 2020 and led them to the finals.Credit…Mike Carlson/Associated Press

A medical exemption (Liz Cambage) and torn Achilles’ tendon (Kelsey Plum) kept two of Las Vegas’s key players out for the 2020 season. In their absences, A’ja Wilson (Most Valuable Player Award) and Dearica Hamby (Sixth Woman of the Year Award) notched award-winning seasons. Angel McCoughtry, in her first season with the franchise, added playmaking and veteran poise, and the Aces made it to the finals.

Cambage and Plum are back, along with JiSu Park, but little else is familiar.

Kayla McBride, a fan favorite, signed with the Minnesota Lynx in free agency, and Las Vegas brought in the former Los Angeles Sparks’ guards Chelsea Gray, as a starter, and Riquna Williams, in reserve.

Plum will come off the bench.

Gray, who had been playing overseas, joined the Aces just 36 hours before the Aces’ preseason game against her former team, so there’s an acute need to develop chemistry. Coach Bill Laimbeer set forth simple goals heading into their regular-season start on Saturday: Get to know one another better, stay healthy and improve conditioning.

Simple goals, but not easy ones.

McCoughtry tore an anterior cruciate ligament on Saturday, and is expected to miss the season. McCoughtry’s absence will slow the chemistry-building process, as will Plum’s: A member of the U.S.A. Basketball 3×3 team, she will miss a week at the end of May while competing in an Olympic qualifying tournament.

As the first W.N.B.A. team ever to have the top two picks in the draft, the Dallas Wings had a unique opportunity to fortify an already young, developing group.

They added Charli Collier of Texas, who was the consensus No. 1 pick, and Awak Kuier, a 6-foot-4 center from Finland. One of Dallas’s biggest weaknesses last season was interior offense. Wings Coach Vickie Johnson told reporters last week that Collier’s scoring in the paint had stood out, and that should earn her playing time.

She will be a good scoring punch alongside forward Satou Sabally, last year’s No. 2 overall draft pick, and guard Arike Ogunbowale, who almost led Dallas to the playoffs last season as the league’s leading scorer, averaging 22.8 points per game.

Moriah Jefferson played just nine games a year ago but will be a part of the regular rotation this season now that she’s healthy, and Tyasha Harris earned valuable experience overseas and is expected to contribute more than her 6.9 points per game from last season.

Then there’s the fifth-year veteran Allisha Gray, who may be the glue for the roster of third- and second-year players.

With the departures of Candace Parker and Chelsea Gray, Nneka Ogwumike, right, is expected to fill a leadership role.Credit…Mike Carlson/Associated Press

For the first time since 2007, the Los Angeles Sparks will be playing without Candace Parker, who led the team to their third championship in 2016. Parker, a free agent, signed with her hometown Chicago Sky in the off-season, but the Sparks have a fair amount of star power on deck to attempt the unenviable task of replacing her. The sisters Nneka and Chiney Ogwumike will be joined by the free agency acquisitions Amanda Zahui B — whose job will be to help fill the Parker-size hole in the paint — Erica Wheeler and Kristi Toliver, both veteran guards.

Beyond that, the Sparks will look to make the most of what seems like a transition season. Young guards like Te’a Cooper and the second-round draft pick Arella Guirantes will undoubtedly find strong mentorship in Toliver, a W.N.B.A. champion and recent N.B.A. assistant coach. Nneka Ogwumike will be compelled to step into a leadership role with the departure of not only Parker but the Sparks’ 2020 second-leading scorer, Chelsea Gray, and fourth-leading scorer, Riquna Williams. Guard Brittney Sykes will also be returning to the team as one of just a few familiar faces to help ease the transition, but Ogwumike is the centerpiece of the new-look Sparks.

Third-year Sparks Coach Derek Fisher hasn’t been able to capitalize on his team’s impressive regular-season records in the postseason. With so much change on this year’s roster, it seems unlikely that Los Angeles will make a deep run in 2021. But the Sparks have the talent — both veteran and up-and-coming — to challenge any team in the league.

Sylvia Fowles is returning to the Lynx lineup this season after being sidelined by a calf injury last year.Credit…Chris O’Meara/Associated Press

“She just looks like a coach that knows how to win,” forward Rennia Davis said of Lynx Coach Cheryl Reeve. That assessment will be put to the test right away, though Reeve is used to challenges early in the season.

Jessica Shepard, picked 16th overall in 2019, was clicking beautifully with Napheesa Collier, that year’s sixth overall pick, when Shepard went down with a knee injury six games into her pro career. Now Davis, the ninth overall pick in this year’s draft, is out indefinitely with a foot injury.

Sylvia Fowles is back, too.

After setting the career rebounding record in 2020, Fowles was sidelined by a calf injury that forced her to miss most of the season. Yet the Lynx persevered, nearly upsetting the Seattle Storm in Game 1 of the semifinals before losing the series in a sweep. Reeve said she will restrict Fowles to roughly 24 minutes per game and diversify offensive schemes so that her title-winning veteran doesn’t have to carry the load.

But with Collier and Kayla McBride, who signed on as a free agent, arriving late from playing overseas, Reeve will have to improvise once again. So far, forward Natalie Achonwa, who joined in free agency, has made herself irreplaceable to a team seeking to shore up its defense beyond Fowles. Aerial Powers, who won a championship with the Washington Mystics in 2019 and averaged 4.9 rebounds per game last season, is expected to help that effort.

Breanna Stewart is hoping to lead the Seattle Storm back to the W.N.B.A. finalsCredit…Chris O’Meara/Associated Press

The reigning champions had a surprisingly eventful off-season, headlined by their decision to trade their starting center Natasha Howard to the Liberty for the No. 1 overall pick in the 2021 draft. They then flipped that pick to the Dallas Wings in exchange for the third-year forward Katie Lou Samuelson and a 2022 second-round pick. They also lost starting guard Alysha Clark, who, along with Howard, was key to Seattle’s success on defense during their 2018 and 2020 title runs. Clark signed with the Mystics in free agency.

But the finals M.V.P. Breanna Stewart, the star shooter Jewell Loyd and perhaps most impressively Sue Bird have all returned to the Storm to compete for the W.N.B.A.’s first back-to-back titles since the Sparks won in 2001 and 2002. Bird will be in her 18th season, a feat of longevity unmatched by any of her peers currently competing — although Candice Dupree, who signed with the Storm in the off-season, also has double-digit seasons under her belt.

With Stewart, the Storm don’t need to find another once-in-a-generation player among their young talent. They do, however, need to figure out who in that pool will best recreate the alchemy of their title teams, positioning Jordin Canada as the point guard of the future and finding a go-to center in either Mercedes Russell or Ezi Magbegor. If they can do that and keep Stewart, Loyd and Bird healthy, the Storm have a better chance than most teams to make history as the only five-time W.N.B.A. champions by the end of this season.

The Phoenix Mercury have the triple threat of, from left, Brittney Griner, Diana Taurasi and Skylar Diggins-Smith.Credit…Phelan M. Ebenhack/Associated Press

Brittney Griner’s back. Skylar Diggins-Smith is back. And Diana Taurasi, often referred to as the GOAT, is too.

Sprinkle in teammates like Brianna Turner and Bria Hartley, and newcomers like Kia Nurse and Megan Walker, and the Phoenix Mercury are focused on returning to their championship-winning ways.

“You just see all these pieces,” Taurasi said, adding, “And if we can all get on the same track and on working toward the same goal, I think we can do some special things this summer. But that’s just all nonsense if we don’t come in and put the work in every day.”

The Mercury finished with a 13-9 record last season, losing to the Minnesota Lynx in the second round of the playoffs. With an eye toward a deeper playoff run, they acquired guard Nurse and Walker in an off-season trade with the Liberty. Hartley, an eighth-year guard, is working her way back after a knee injury, and more offense could come from Turner.

“We have pretty good chemistry,” Coach Sandy Brondello said. “We grew a lot together as a team last year. Hopefully we can continue to build on that.”