Wainwright (1-3), activated from the Covid-19 injured list to make the start, fell behind 5-2 in the third inning. But he didn’t give up any more runs before leaving with two outs in the sixth, and the bullpen preserved his first win of the season.

Genesis Cabrera and Giovanny Gallegos combined for two and a third innings of scoreless relief. Alex Reyes worked around a pair of walks in the ninth to earn his eighth save — he has not allowed an earned run in 14⅓ innings this season.

Joey Lucchesi (0-2) allowed six runs on seven hits in two and two-third innings after being recalled from the Mets’ alternate training site to make the start. He has not pitched into the fourth inning in any of his three starts this season.

Dominic Smith drove in a run on a groundout and Kevin Pillar hit a two-run homer to put the Mets up in the third.

Arenado answered with a three-run drive in the bottom half to make it 5-5. His fifth home run of the season landed in the left-field bullpen. Paul DeJong and Tyler O’Neill followed with doubles to put St. Louis ahead.

Bader hit a 450-foot home run to the left field bleachers, a solo drive that made it 2-2 in the second. He connected a day after hitting his first homer of the season.

Tommy Edman led off the first inning with a triple and scored on Dylan Carlson’s sacrifice fly.

Wainwright hit Tomas Nido in the elbow with the bases loaded to tie it in the second. Two batters later, Jeff McNeil walked to put the Mets up by 2-1.

After Monday’s loss, the Mets announced that they had fired the team’s hitting coach, Chili Davis, as well as the team’s assistant hitting coach, Tom Slater. The moves come with the Mets having scored just 76 runs over their first 23 games, which is the lowest figure in the majors. They have hit a major league-worst 18 home runs and Francisco Lindor, the team’s prized off-season acquisition, is hitting just .163.

Davis will be replaced by Hugh Quattlebaum, who was named the Mets’ minor league director of hitting development this off-season. Quattlebaum, 42, had spent the previous three seasons with Seattle. Kevin Howard, who had previously been the Mets’ director of player development, will be the team’s new assistant hitting coach.

Alomar Resigns From Hall of Fame’s Board 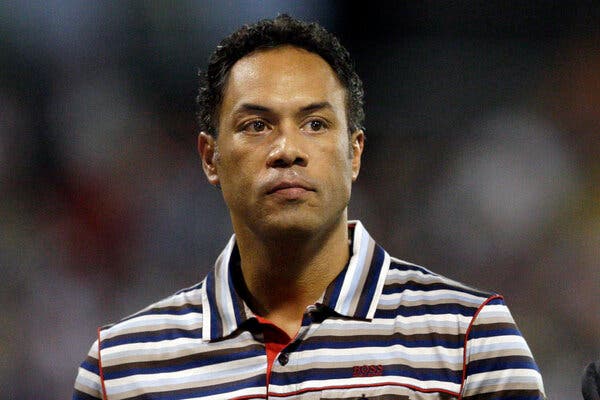 Roberto Alomar was fired as a consultant for Major League Baseball last week. On Saturday he resigned from the Baseball Hall of Fame’s board of directors.Credit…Andres Leighton/Associated Press

The Baseball Hall of Fame has accepted Roberto Alomar’s resignation from the board of directors, chairman Jane Forbes Clark announced Monday.

Alomar, who was elected to the board in 2019, submitted a letter of resignation on Saturday in the wake of an allegation of sexual misconduct.

The Hall of Fame second baseman was fired last week as a consultant by Major League Baseball and placed on the league’s ineligible list after an investigation into the allegation. Commissioner Rob Manfred announced the firing Friday, saying in a statement that a baseball industry employee reported an incident earlier this year involving Alomar from 2014.

The league hired an external legal firm to investigate the matter. M.L.B. said it would not provide further details on the investigation to protect the individual who came forward.

Clark said after Manfred’s announcement that Alomar’s plaque would remain on display in the Hall because “his enshrinement reflects his eligibility and the perspective of the BBWAA voters at that time.” Alomar was inducted in 2011.

Alomar also lost his position as a special assistant with the Toronto Blue Jays. The club said it was severing ties with Alomar, including removing him from its Level of Excellence and taking down his banner from Rogers Centre.

The Canadian Baseball Hall of Fame and Museum also said it would not revoke his status as an inductee, but it did ban him from future Hall events and said it would no longer be associated with him or his foundation.

Alomar was a 12-time All-Star over 17 seasons with San Diego, Toronto, Baltimore, Cleveland, the Mets, the White Sox and Arizona.