The Los Angeles Lakers will not play another game until October, but LeBron James was apparently not ready to stop dunking. Fresh off the maiden first-round playoff exit of his career, James responded to a cresting wave of injuries sustained by marquee stars with a social media scolding of the N.B.A.

In response to a sobering bulletin about the Los Angeles Clippers’ Kawhi Leonard, who is out indefinitely after sustaining a knee sprain in the Clippers’ second-round series against the Utah Jazz, James took to Twitter. He offered commiserations to fans about the record-setting eight current All-Stars who have missed at least one game this postseason — and criticized league officials for not doing more in this pandemic season to “protect the well being of the players.”

By more he meant less: James said he issued clear warnings about the increased injury risk attached to wedging a 72-game regular season between Dec. 22 and May 16, with the playoffs timed to end right before the Tokyo Olympics, compared with starting in mid-January and possibly playing fewer games. The 2019-20 season, remember, strayed into October and spawned the shortest off-season in league history after a four-month interruption imposed by the coronavirus pandemic.

“They all didn’t wanna listen to me about the start of the season,” James wrote. “I knew exactly what would happen.”

Self-serving? Yes. Vague? Yes again. There was an undeniable whiff of convenience to James’s remarks, as a rationalization for the swift end to the Lakers’ title defense, along with a lack of clarity. James did not specify to whom, when or where those warnings were registered. He was also surely aware that the 2020-21 schedule was mutually agreed upon by league officials and the National Basketball Players Association, and that starting later, as James had hoped, very likely would have cost both parties significant television revenue by falling shy of the 72-game threshold.

Yet the soliloquy, above all, amounted to a loud and powerful “told you so” from James that drowned out the disclaimers. It carried more bite than his recent blasts about the N.B.A.’s decision to stage an All-Star Game in Atlanta in March, followed by protests against the playoff play-in tournament that his Lakers, after long-term injuries felled both James and Anthony Davis, had to win to make the playoffs after slipping to No. 7 in the West.

Beyond the uncomfortable spotlight he brought to a dampenedN.B.A. postseason increasingly known for who isn’t able to play, James said what so many of his fellow players have surely been thinking — using his biggest-in-the-game megaphone. The rant highlighted a prime concern in front offices and among medical staffs throughout the league: What cost, present and future, did the stacking of two pandemic seasons with such a short turnaround impose?

The players’ union agreed to that timeline after learning that the N.B.A.’s television partners pushed for it. The players, who essentially split annual profits and losses evenly with team owners, were told that starting in December rather than January would result in a difference of roughly $500 million in revenue, after last season’s shortfall of $1.5 billion. No less important to the league office was the opportunity to wrap this season up in time to return to its usual October-through-June arc in 2021-22.

In retrospect? It was a giant ask. The physical and mental toll of last season’s restart in the Florida bubble, combined so soon with the rigors of a season in home markets governed by strict Covid-19 protocols and daily testing that ate into rest and recovery time, had teams fearful from the start of a spate of soft-tissue injuries. Player stress and training time lost, with fewer practices and a second-half crush of games to make up earlier postponements, only increased those fears.

As the number of injured stars became a dominant second-half story line, whether truly a byproduct of the compressed schedule or purely bad luck in some instances as seen with the ankle injuries sustained by James and the Nets’ Kyrie Irving, more questions surfaced. One of the biggest: How will the franchise cornerstones who shoulder such demanding loads rebound next season?

“I don’t know if people do get the question you asked,” the Philadelphia 76ers coach, Doc Rivers, told me. “There’s so much stress on those guys. Some guys log heavier minutes — they have to do more.” 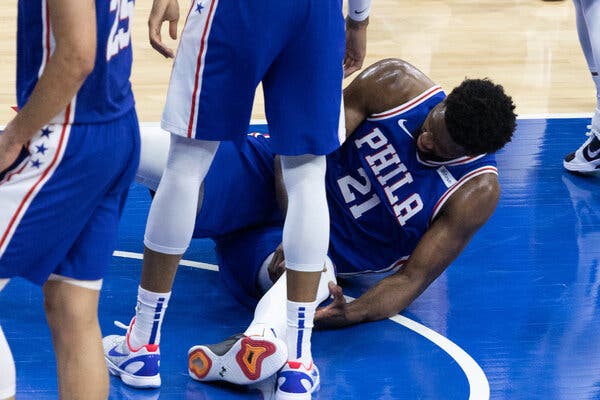 Joel Embiid after falling hard in the fourth quarter of Game 5 against the Atlanta Hawks. Embiid has been playing through a meniscus tear in his right knee.Credit…Bill Streicher/USA Today Sports, via Reuters

Rivers’s All-Star center, Joel Embiid, is one of those guys. Embiid has been playing through a small meniscus tear in his right knee and, after a roaring start to Philadelphia’s second-round series against Atlanta, was unable to prevent the top-seeded Sixers from falling into a 3-2 deficit entering a Game 6 on the road.

Those eight All-Stars who have missed at least one playoff game include Embiid. The number will swell to nine if Phoenix’s Chris Paul, who this week entered the league’s health and safety protocols, has to miss any of the upcoming Western Conference finals.

As I’ve been writing since April, there is little charm to be celebrated from the uncharacteristically wide-open nature of these playoffs when the suspense largely stems from game- and series-changing absentees.

“Injury rates were virtually the same this season as they were during 2019-20, while starter-level and All-Star players missed games due to injury at similar rates as the last three seasons,” said Mike Bass, an N.B.A. spokesman, citing the league’s internal data. “While injuries are an unfortunate reality of our game, we recognize the enormous sacrifices N.B.A. players and teams have made to play through this pandemic.”

While true that one of the sport’s eternal struggles is conclusively attributing an injury to overuse, and that no one on the outside can conclusively say a 60-game schedule would have kept stars safer than 72 games, internal data that isn’t made public has obvious limitations. Thanks to James’s blasts, much more attention has been placed on the numbers dispensed by the Elias Sports Bureau. It heaped the loudest pressure yet on the league to prove that 72 games across five months before the playoffs, even with reduced travel, wasn’t an injury accelerant.

Kevin Durant uncorked a performance for the ages (49 points in 48 minutes) on Tuesday to haul the Nets to the brink of the Eastern Conference finals despite Irving’s absence and James Harden’s limited effectiveness on an injured right hamstring. Hours after the Clippers and Suns lost Leonard and Paul on a wretched Wednesday, Atlanta tried to bring the focus back to basketball with its remarkable Game 5 comeback against the 76ers — or, depending on your perspective, Philadelphia’s unfathomable fold.

These are the things we should be dissecting. The Leonard-less Clippers’ Game 5 win in Utah, inspired by Paul George right after the Sixers squandered a 26-point lead to the Hawks, was another.

Over and over, sadly, injuries have changed the conversation. They affect every postseason, true, but the intrusions have seemingly been a constant since March 20, when James (high ankle sprain after Atlanta’s Solomon Hill collided with him) and Charlotte’s newly named Rookie of the Year Award winner LaMelo Ball (fractured wrist after crashing to the floor) were hurt on the same day.

Elias circulated last week that this season’s 27 All-Stars combined to miss a higher rate of games (13.7 games per player and 19 percent overall) than in any previous season. Michele Roberts, the executive director of the players’ union, declined to comment on Wednesday when asked if James had indeed raised his concerns about such developments in consultation with union officials before the season.

“I speak for the health of all our players and I hate to see this many injuries this time of the year,” James said as part of his rim-shaking social media post.

On this occasion, and this topic, they were comments heard — and felt — by an entire league.

Facts and figures: Time, television and the teams.