LEXINGTON, Ky. — For nearly 40 years, Dubai’s ruler has spent vast sums here in central Kentucky. On thousands of acres of lush bluegrass with gently rolling hills mapped by limestone and plank fences. On horses — stallions and mares to populate his farms with foals and yearlings purchased in the sales ring.

All in pursuit of winning a $3 million race, the Kentucky Derby.

After 11 failed attempts, the ruler, Sheikh Mohammed bin Rashid al-Maktoum, finally has a horse with a real shot to win the Derby, America’s most famous race. Essential Quality is the 2-1 morning line favorite to win its 147th running on Saturday at Churchill Downs in Louisville.

The prerace talk among racing insiders is all about what Sheikh Mohammed’s passion, perseverance and money have accomplished in the sport of kings. Explicitly not discussed is the international human rights scandal over the sheikh’s role in the disappearance of Sheikha Latifa bint Mohammed al-Maktoum, one of his daughters.

But others are speaking up. On Wednesday, a group of human rights lawyers and students at the University of Louisville filed a complaint with the Kentucky Horse Racing Commission, asking it to bar Sheikh Mohammed and Essential Quality from the Derby.

“The Horse Racing Commission must also use its authority to end his involvement in Kentucky horse racing, at least until Princess Latifa is free of captivity,” the document said. 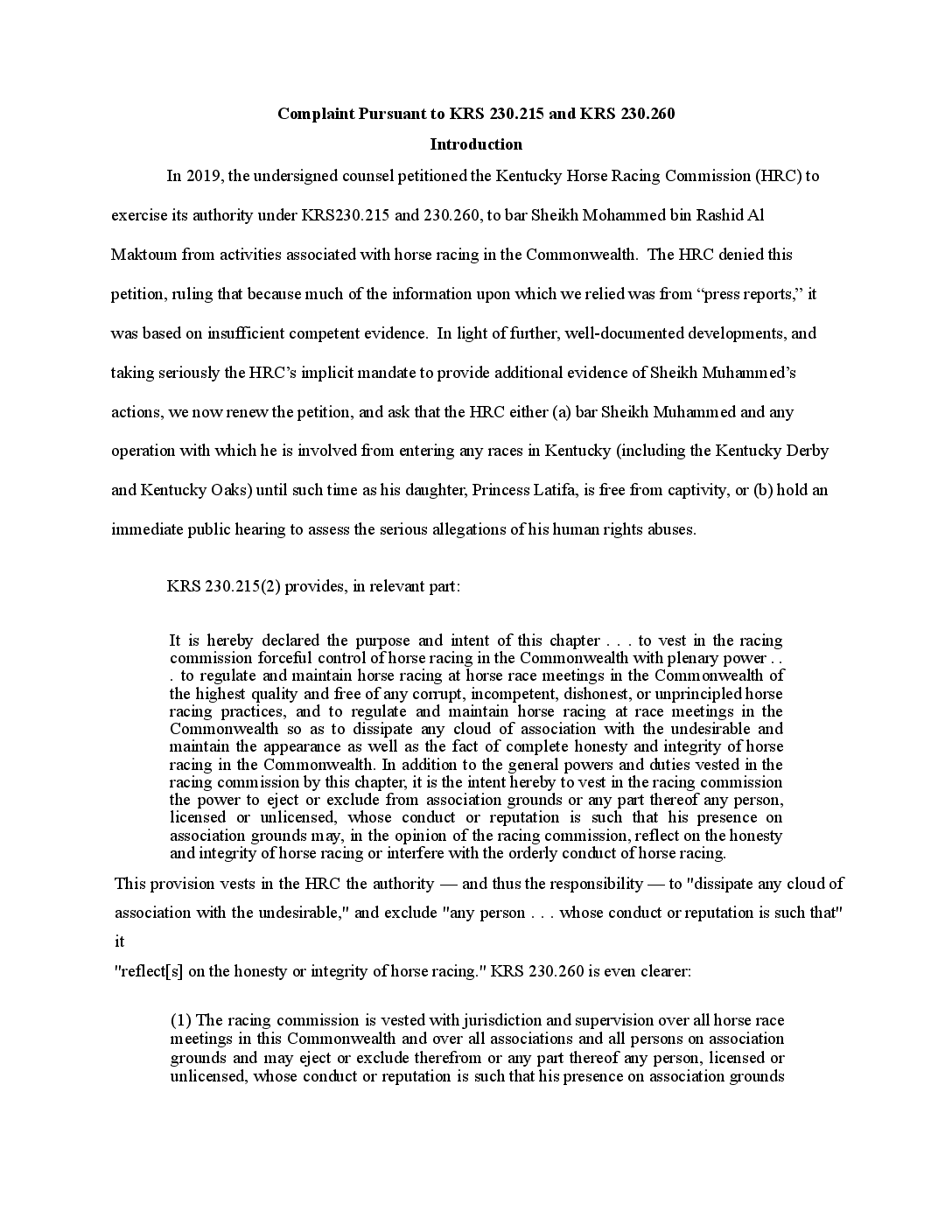 The complaint came a week after a panel of United Nations human rights experts, including members of a panel that deals with forced disappearances and violence against women, asked Dubai for proof that Sheikha Latifa was still alive and called for her immediate release.

“Evidence of life and assurances regarding her well-being are urgently required,” the U.N. analysts said. In recent years, videos have surfaced of Sheikha Latifa saying she was imprisoned in a Dubai palace and afraid for her life. Her father, she said in one video, “only cares about himself and his ego.” 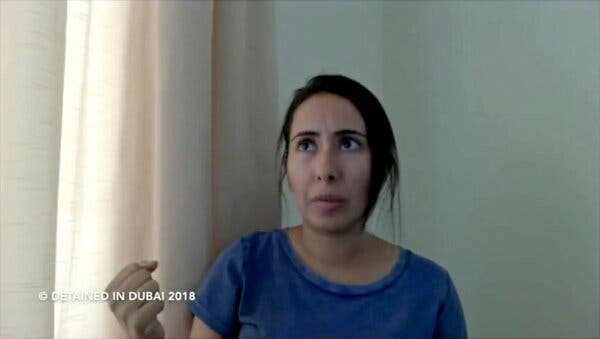 Sheikha Latifa bint Mohammed al-Maktoum, a daughter of Dubai’s ruler, complained in a video that her father was holding her captive.Credit…Detained in Dubai, via Associated Press

“I’m making this video because it could be the last video I make,” she said.

This is not the first time Sheikh Mohammed’s treatment of female family members generated outrage. Last year in Britain, a judge found that he had abducted another daughter, Shamsa, off the streets of Cambridge in 2000, flew her by helicopter to France and then returned her to Dubai. In addition, his youngest wife, Princess Haya, also left Dubai fearing for her life after she was subjected to a campaign of intimidation and harassment.

United Arab Emirates diplomatic missions in New York and Dubai did not answer requests for comment.

In Europe and especially Britain, where Sheikh Mohammed has even vaster financial interests in real estate and the thoroughbred industry, the disappearances have prompted calls for financial sanctions and travel bans on the man who has been a racetrack guest of Queen Elizabeth II. The British Horseracing Authority has come under pressure to bar Sheikh Mohammed under its “fit and proper persons test,” but has yet to do so.

“His behavior is beyond the pale,” said Kenneth Roth, executive director of Human Rights Watch. “He should be persona non grata at these big events.”

The United Arab Emirates is an important ally of the United States in the Middle East, especially now as the Biden administration tries to contain Iran. The U.S. response to the U.N. statement has been muted.

“We take these reports seriously and are closely monitoring the situation,” said a State Department spokesman. “We take any reporting of persons held against their will seriously and reiterate that freedom from arbitrary detention is a universal human right.”

In 2018, Sheikha Latifa, 35, fled Dubai in a yacht, but was turned over to Emirati security officers by Indian commandos who had raided the boat and seized her. She has not been seen in public since, except for an appearance at a lunch attended by Mary Robinson, a former president of Ireland. At the time, Robinson said Sheikha Latifa was mentally troubled and receiving good care from her family, only to later tell the BBC she had been “horribly tricked.”

Here in Kentucky, where the bluegrass is seeded with Sheikh Mohammed’s riches, no one wants to talk about him beyond the chances of Essential Quality finally delivering him the blanket of roses.

After all, Sheikh Mo, as he is known here, is a one-man economic impact event. He employs hundreds of Kentuckians. Most Septembers, he arrives at Blue Grass Airport by private jumbo jet for the Keeneland yearling sale. He examines horses alongside hardboot breeders and owners, often sporting a windbreaker in the royal blue of his family’s Godolphin racing stable.

And Sheikh Mo spends — hundreds of millions of dollars, so far, winning some auctions and driving up prices on the horses that he underbids on.

As Arthur Hancock III, a fourth-generation thoroughbred breeder, once put it: “If one September that big old plane wasn’t at the airport, you would have a whole lot of hearts sinking around here.”

The Kentucky Horse Racing Commission did not respond to a request for comment. Jimmy Bell, the president of Darley America, declined to be interviewed about the sheikh or his American operation.

Shannon Arvin, the new president and chief executive of Keeneland, said the sales company dealt mostly with Bell and his staff.

“I’m not very familiar with the facts or circumstances surrounding any other issues regarding Sheikh Mohammed,” she said.

A billboard in Dubai showing Sheikh Mohammed atop a horse.Credit…Paula Bronstein/Getty Images

In the 1980s, the Maktoum family acknowledged that Dubai could not prosper on a diminishing oil reserve and set out to diversify the economy and become the financial capital of the United Arab Emirates, a country incorporating seven emirates that won independence from Britain in 1971.

In thoroughbred racing, Sheikh Mohammed combined one of his great interests with his ambition to turn Dubai into the Singapore of the Middle East. He has commercial breeding operations and thousands of acres in seven countries from Europe to Australia to Japan.

It is unlikely the sheikh will be at Churchill Downs to watch Essential Quality attempt to win one of the few races in the world that has eluded him. While Sheikh Mohammed sometimes is seen at the races in Europe, he rarely attends races at American tracks. He is, however, a fixture at the Keeneland sale, where he moves among horsemen in jeans and with a coterie of advisers. He is regarded as friendly but not too familiar, and he can supercharge the auction ring when he sees a horse he wants.

Essential Quality is evidence of how Sheikh Mohammed’s operation in this country has evolved. Unlike many of his Derby entrants (the best was Frosted, who finished fourth in 2015), who were bred, trained and raced overseas, this gray colt was born here. He was last year’s 2-year-old champion, is undefeated in five starts in America and has banked more than $2.2 million.

Essential Quality is trained by a Louisville native, Brad Cox, who was the 2020 Eclipse Award winner for outstanding trainer. He, too, has tried to stay focused on the racetrack and stay clear of international intrigue.

“I mean, as far as American racing, this is — in my eyes, it’s the biggest race there is,” Cox said via teleconference. “I think most people in the business, they would agree with that. And I know Sheikh Mohammed wanted to win the race for several years.”

Cox, like others interviewed here, did not speak of abducted and imprisoned daughters and harassed and intimidated wives. He said he counted himself fortunate, as do most in the thoroughbred industry here and in Europe who depend on the sheikh’s patronage.

“They had a classy organization that’s obviously dealing with some high-end bloodstock, some of the best bloodlines in the world. And it’s been just a real honor to train for such a global empire and to have a horse like this.”

What to Know About the Yankees’ Coronavirus Outbreak