Sounds From the 153rd Belmont Stakes

Melissa Hoppert, our reporter for the Belmont Stakes, brings you the scene from Belmont Park as thousands of fans ready for the final leg of the Triple Crown.

For the third year in a row, the Belmont Stakes will be run without a Triple Crown on the line, but this time, organizers are likely relieved just to have a competitive and (they hope) uncontroversial horse race on their hands.

It has been a tumultuous spring for the sport. Medina Spirit tested positive for betamethasone, a corticosteroid, after winning the Kentucky Derby on May 1 and finished third in the Preakness while a second sample was tested. After the Preakness, the New York Racing Association announced that the colt’s trainer, Bob Baffert, a two-time Triple Crown winner and the most famous person in the sport, would be barred from running horses at any New York tracks until further notice.

On Wednesday, the presence of betamethasone in Medina Spirit at the Kentucky Derby was confirmed, setting the stage for the horse to become the second winner in the 147-year history of the Derby to be disqualified because of a failed drug test.

Citing the positive test, Churchill Downs suspended Baffert, a seven-time winner of the Derby, from entering horses at the racetrack in Louisville, Ky., for two years, meaning no horse trained by Baffert or his stable can race in the Derby in 2022 or 2023.

“Reckless practices and substance violations that jeopardize the safety of our equine and human athletes or compromise the integrity of our sport are not acceptable and as a company we must take measures to demonstrate that they will not be tolerated,” Bill Carstanjen, chief executive of Churchill Downs, said Wednesday.

At the Belmont Stakes, Rombauer — the winner of the Preakness — will headline the field of eight horses. Coverage of the Belmont will begin Saturday at 3 p.m. Eastern time on NBC Sports Network and will continue on NBC at 5 p.m. Post time for the race is 6:49 p.m.

Here’s what else you need to know about the 153rd running of the race.

The Belmont returns to normal this year, mostly.

This year, the Belmont Stakes returns to its normal mile-and-a-half distance (it was a mile and an eighth last year) and its traditional placement as the final leg of the Triple Crown. The pandemic altered the Triple Crown schedule heavily in 2020: The Belmont was held in June as the first leg for the first time, the Derby was in September, and the Preakness, usually the second of the three races, came in October. None admitted spectators. 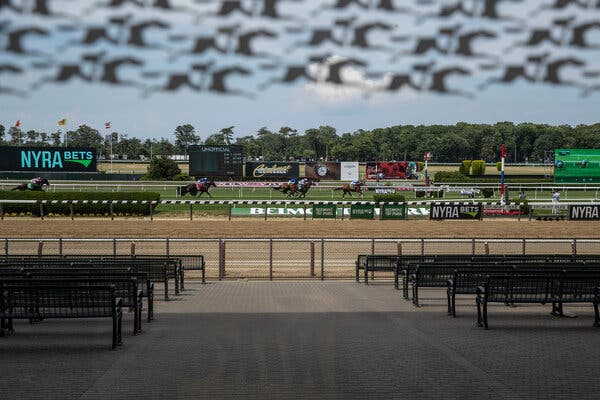 The benches were empty last year as horses warmed up before the race. Only the unvaccinated in this year’s crowd will be required to wear a mask.Credit…Victor J. Blue for The New York Times

All have returned to their regular spots on the calendar with limited fans this year. The announced crowd for the Kentucky Derby on May 1 was 51,838, close to a third of the venue’s usual capacity, but at the time it was the biggest crowd at a sporting event since the pandemic began. Attendance for the Preakness on May 15 was capped at 10,000. That is a little less than 10 percent of the track’s usual capacity.

When tickets went on sale for the Belmont in May, attendance was capped at 11,000 fans based on New York State guidance that outdoor sports and entertainment venues operate at 33 percent capacity and all spectators submit proof of vaccination or a negative coronavirus test result.

Since then, that guidance has been relaxed and organizers have released some more tickets, but still expect about 11,000 people. (The Belmont’s attendance record of 120,139 was set in 2004, when Birdstone denied Smarty Jones a Triple Crown sweep.) Proof of vaccination or a negative test is no longer required, and masks are mandatory only for unvaccinated guests. There are no general admission tickets, and socially distanced seating is limited to reserved seats and hospitality areas (some sections are designated for vaccinated people only). Belmont’s signature backyard picnic area — usually covered with blankets and camping chairs — will instead be filled with picnic tables that were sold in groups of six at more than $100 each.

In 2020, Tiz the Law became the first New York-bred horse to win the Belmont Stakes in 138 years, but he did so at the shorter distance, not the punishing mile and a half that inspires the race’s nickname, the Test of the Champion. He finished second in the Derby, ending his modified Triple Crown hopes.

The Derby favorite is the favorite again.

Rombauer defeated Midnight Bourbon by three and a half lengths in the Preakness, but he is not the morning-line favorite in the Belmont. That distinction goes to Essential Quality, the Derby favorite who was bumped at the gate, ran wide around both turns and finished a fast-closing fourth for his first loss in six starts.

Essential Quality is owned by the controversial ruler of Dubai, Sheikh Mohammed bin Rashid al-Maktoum, has tactical speed and should have no problem with the mile and a half as his sire, Tapit, has produced three Belmont winners. Rombauer, who did not race in the Derby, picks up the veteran New York jockey John Velazquez, who won his fourth Derby aboard Medina Spirit.

Besides Essential Quality, other horses who ran in the Derby are Bourbonic, Hot Rod Charlie, Rock Your World and Known Agenda. Like Rombauer, the Japan-based France Go de Ina did not run in the Derby; he finished second to last in the Preakness. No horses will compete in all three Triple Crown races this year.

There is one fresh horse in the race, Overtook, the third-place finisher in the Peter Pan Stakes here in early May. He will be ridden by Manny Franco and is one of three Belmont entries for the trainer Todd Pletcher, along with Bourbonic and Known Agenda. Pletcher has three wins in the Belmont (Rags to Riches, Palace Malice and Tapwrit), six second-place finishes, and three thirds from 30 prior starters.

Bourbonic will be ridden by Kendrick Carmouche, who could become the first Black jockey to win the race since Willie Simms in 1894. Known Agenda was scheduled to be ridden by Irad Ortiz Jr. — the top jockey in North America and at Belmont Park — but he was injured when his mount stumbled in the fifth race at Belmont on Thursday and will be sidelined at least two weeks. Ortiz was scheduled to ride in all 13 races on the Belmont card on Saturday, setting up a furious dash by jockeys’ agents to get their riders on his mounts.

Young Italian Men are Taking Over the French Open. They Have...