The bullpen session was supposed to last 30 pitches. Even after a two-week bout of Covid-19, in which he was felled by a fever, chills, and a loss of both energy — losing 20 pounds in the process — Eduardo Rodriguez thought he could make it through this ordinary baseball task last July. But by the fifth pitch, the top starting pitcher for the Boston Red Sox was so drained he said he was seeing stars.

Rodriguez and an athletic trainer assumed that his body was still shaking off the rust from the illness. So three days after the failed attempt, having squeezed in some cardiovascular exercises despite lingering lethargy, Rodriguez again climbed a mound at Fenway Park for a bullpen session. Exhaustion again took over by his 10th pitch.

Soon thereafter, Rodriguez was diagnosed with myocarditis, an inflammation of the heart muscles, which can arise from the havoc created by Covid-19. The condition can lead to cardiac arrest with exertion. To recover, Rodriguez, who had been in constant motion since his childhood playing soccer and baseball in his native Venezuela, was barred from any physical activity for three months.

No trips to the supermarket. No walks outside with the dog. No video games. And perhaps worst of all for a professional athlete in the prime of a finite career: missing an entire season.

“I had to stay as stable as possible and not accelerate the heart,” he said, adding later, “I literally did nothing.” 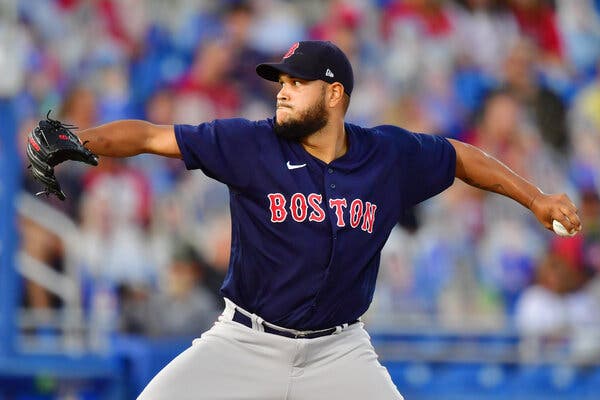 Rodriguez had a difficult start against the Toronto Blue Jays on Tuesday, but he is 5-2 for the season and his team is in first place.Credit…Julio Aguilar/Getty Images

Fast forward 10 months and Rodriguez, 28, is a key member of the surprising Red Sox, who enter Wednesday’s game atop the American League East with a 25-18 record. After a difficult outing against the Toronto Blue Jays on Tuesday, Rodriguez is 5-2 with a 4.70 earned run average and has the best strikeout-to-walk ratio of his career.

As the United States reopens during what is hoped to be the downslope of the coronavirus pandemic — thanks to the proliferation of vaccinations — Rodriguez represents both a reminder of the dangers of the virus and how much society has grown to understand it.

Last year, uncertainty about the effects of this new virus on the heart — and competing interests — fueled concern about sports returning to play during a pandemic. More studies emerged with time, some reaching different conclusions than initial ones. To date, Rodriguez is the only known case of myocarditis among Major League Baseball players.

“It is less common than we first feared,” Dr. William Schaffner, an infectious disease expert at Vanderbilt University, said in a recent phone interview. “That’s good.”

A study published in March in JAMA Cardiology — with participation from all six major North American professional sports leagues — found that only five of 789 athletes infected with the coronavirus were later found to have inflammatory heart diseases, less than 1 percent. And of those five unnamed athletes — all of whom had Covid-19 symptoms worse than mild but not enough to be considered clinically severe — two had pericarditis and three had myocarditis. 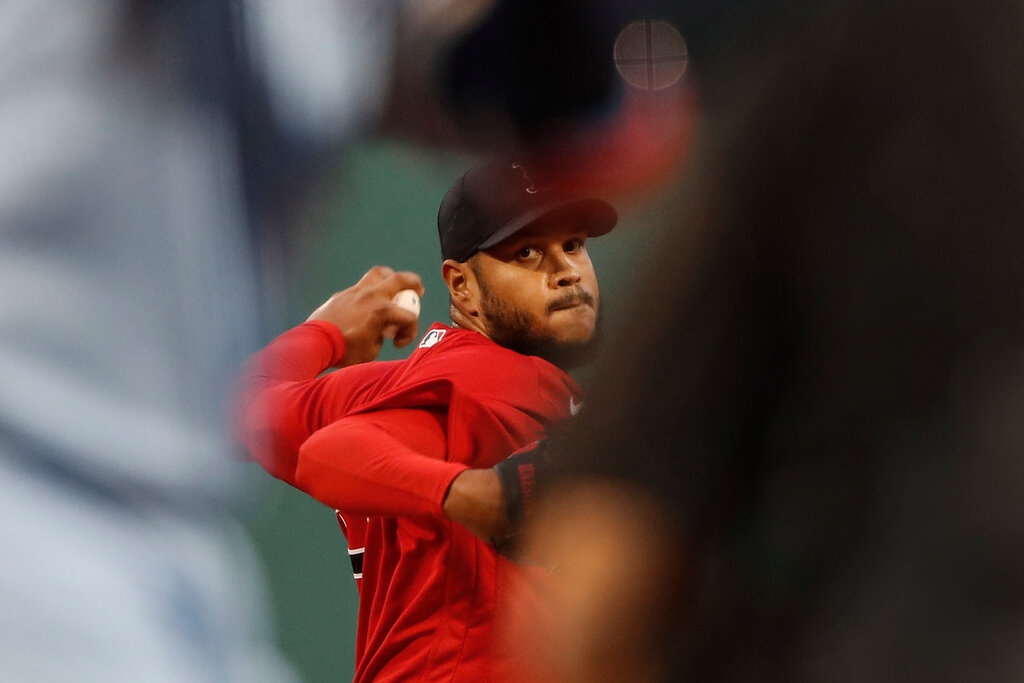 ‘Now that I’m recovered, I can be an example to others to take care of themselves. This isn’t something like, ‘Oh, this is the flu, it’s not much.’’

Still, Schaffner, who was not an author of the study, said he remained concerned because even people who initially have mild or even no symptoms can eventually suffer from long Covid, in which symptoms drag on for weeks or months after first being infected. Even though it occurs less frequently, he said myocarditis can still develop in Covid-19 patients who didn’t end up hospitalized.

“The way to prevent all that is to do everything we can to prevent the initial infection,” he said.

Rodriguez said he was unsure how he and his wife, Catherine, were infected. In June 2020, about a week before leaving their home in Miami for workouts in Boston, Rodriguez began feeling warm and tired. He thought it was the flu.

The next day, his fever spiked, his body ached and his knees wobbled getting out of bed. A day later, he wondered if he needed to go to the hospital. “I felt like I was 100 years old where you need help getting out of bed,” he said.

Rodriguez alerted the Red Sox. The team sent him virus tests, which came back positive for him and his wife. They put masks on their two young children, didn’t let them sleep with them and thankfully, he said, neither got sick.

He said he vomited after each attempt at eating. His sense of taste and smell vanished. Rodriguez said all he could hold down was water or juice. He lost 20 pounds in 10 days, dropping to 218 pounds. He shivered in the shower regardless of the temperature of the water.

Christian Vazquez stayed in touch with Rodriguez throughout the pitcher’s time away from the team. Now they are thriving for a surprisingly good team.Credit…Billie Weiss/Boston Red Sox, via Getty Images

By the 15th day, Rodriguez said his symptoms finally disappeared. He kept his left arm loose by throwing into a net in the backyard and attributed the fatigue he felt when riding an exercise bike to the aftereffects of the virus. He and his wife soon tested negative, and he got the multiple negative results needed to join the Red Sox, albeit late.

But on the mound for those bullpen sessions in Boston, Rodriguez’s heart couldn’t keep up, prompting extensive examinations at Massachusetts General Hospital. Doctors delivered the myocarditis news in a video call.

“I was scared because I didn’t know what that was,” Rodriguez said. “When you hear the heart, you know it’s your motor.”

Chaim Bloom, the chief baseball officer of the Red Sox, called Rodriguez’s diagnosis “really scary” because of the unknown effects of the new virus and because myocarditis could be life altering.

Rodriguez said doctors told him in a subsequent video call that the best course of action was to rest, which meant no baseball last season. His immediate fears about his career were calmed when they told him he could make a full recovery after three months of inaction. Still, sitting alone in his apartment in Boston, Rodriguez said he felt empty.

“Imagine, you live to play baseball and you do this every day,” he said. “I wanted to rejoin the team.”

During a team meeting conducted via video call, Rodriguez, who helped the Red Sox win the 2018 World Series and won 19 games in 2019, explained the situation to his teammates.

“It was sad news,” catcher Christian Vazquez said in a phone interview, adding later, “It was a big loss.”

At home, Rodriguez filled his time with wife and two children, Annie, 7, and Ian, 4 — the people he said helped him the most during his recovery. He reminded his youngest not to jump on him in bed. He stopped playing video games because it raised his heart rate. All he did was shower, eat, sit around, sleep, and talk to his children or watch them play in the pool or backyard.

Rodriguez was a key player for Boston’s World Series-winning team in 2018 and likely would have started opening day for the team in 2020 and 2021 if not for myocarditis and a dead arm.Credit…Carlos Giusti/Associated Press

“I saw all the movies on Netflix and Disney+ and TV series,” he said. “We didn’t have anything left to watch.”

During his recovery, Rodriguez said it felt like everyone he had ever played with — and even rivals he came to know over the years — reached out to him, from pitcher David Price and outfielder Mookie Betts, both of whom were traded from Boston to the Los Angeles Dodgers before last season, to the retired slugger David Ortiz. Vazquez said he, shortstop Xander Bogaerts and others would call Rodriguez regularly as a group via FaceTime.

“Everyone was keeping tabs on me,” Rodriguez said. “Baseball is like a brotherhood.”

Although watching his teammates play from afar was hard, Rodriguez said he had experience being away with injuries, mostly to his knee. In all, he watched roughly 45 of the Boston’s 60 games last year. The ones he said he missed were because of family nights.

If there was a silver lining to sitting at home for three frustrating months with an inflamed heart, Rodriguez said it was that he got to spend time with his family that he otherwise wouldn’t have during the baseball season. “From that perspective, I look at it with gratitude,” he said.

A few days after the Red Sox season ended in late September, Rodriguez received the news he had been hoping for: He was cleared for physical activity after a heart examination.

Rodriguez said he worked out even harder than usual, trying to shed the extra weight he had put on his 6-foot-2 frame because of so much inactivity. Since October, he said his body has felt 100 percent back to normal. He reported to 2021 spring training at 228 pounds.

Rodriguez’s weight fluctuated wildly throughout his ordeal with Covid-19 and myocarditis. He is now back to his typical weight of 228 pounds.Credit…Louis Deluca/Associated Press

While living through myocarditis was rough, Rodriguez said he was thankful that no other major leaguers were known to have dealt with it.

“Now that I’m recovered, I can be an example to others to take care of themselves,” he said. “This isn’t something like: ‘Oh, this is the flu — it’s not much.’”

Bloom said it was a blessing that myocarditis wasn’t more widespread in M.L.B.

“In talking to counterparts last summer, as we were all finding our way through this, I kept telling people — because you don’t know how different teams’ medical staffs differ — to make sure you do a heart work-up, because you never know what you might find,” he said recently. “And there are some areas of this game where it’s about life and death. It transcends the competition.”

Being away from the mound for so long, though, has its downsides. A week before opening day, Rodriguez said he felt a lack of strength in his throwing arm, a common and momentary condition in baseball known as dead arm. (The official injured-list designation, though, was elbow inflammation.) He recovered quickly but once again missed the chance to start opening day for the Red Sox.

Rodriguez, however, said he didn’t mind. A week into the season, he was back with the Red Sox and told Vazquez he was very nervous ahead of his first start. Although Rodriguez’s velocity has fluctuated, it has trended back toward his normal range as his body has gotten reaccustomed to pitching every fifth day.

“Knowing everything that he had been through,” Bloom said, “to then see him looking strong and healthy and carving up hitters is a really, really good feeling for a lot of us.”

A few weeks ago, Rodriguez said he hoped to get a vaccination soon and commended the health and safety protocols designed by M.L.B. and the players’ union. He knows full well the potential dangers of the virus. He has just one goal for this season: to stay healthy.