Major marathons are back. Following the moves of the Boston Marathon, the New York City Marathon announced a return to the roads on Nov. 7, with 33,000 runners instead of its usual 50,000-plus, or about 60 percent of its usual size.

The marathon announcements share something with seemingly every other major race that is set to return — there is no requirement for all runners to have a vaccination.

Instead, runners have been asked to produce either proof of a completed vaccination series or a negative Covid test close to race day, even though health officials acknowledge that the safest environment would be a fully vaccinated field.

“These are events with a significant potential for infection among people who are not vaccinated,” said Dr. Marcus Plescia, chief medical officer for the Association of State and Territorial Health Officials.

Still, race officials said they were stopping short of requiring a vaccination for a handful of reasons. They don’t want to get ahead of state policies on vaccines, or prohibit participation based on vaccine access or status.

“We are not in a position to force or mandate for people to take the vaccines, but what we can do is say, ‘These are the requirements,’” said Ted Metellus, the race director for the New York City Marathon.

Kendra Butters, a spokeswoman for the Boston Marathon, said the race so far had runners from 87 countries, including some where the shots are not widely available. “We are currently exploring paths for fully vaccinated and unvaccinated participants that prioritizes health and safety,” she said.

There could be legal complications as well.

Erin McLaughlin, a labor and employment lawyer specializing in health care, said running organizations might not want to require vaccinations because the nature of their operations might qualify their races as a place of “public accommodation.” That would prohibit them from discriminating against people who may be medically unable to get a vaccine, and establishing eligibility for those exceptions could prove onerous and open the door for litigation.

But not all running organizations are tiptoeing around the issue. Steve Lastoe, the founder of N.Y.C. Runs, which puts on races of all distances throughout New York City, has every intention of taking whatever power he has and running with it, so to speak.

Sports stadiums have begun to set aside special sections for the unvaccinated, and Lastoe is planning to do the same at upcoming races. Beginning in June, Lastoe plans to have a wave of vaccinated runners who can start in a single corral without wearing masks and a different, socially distanced wave of runners who are not vaccinated. That wave may occur at a less than ideal time, and those runners will have to wear masks, fulfilling any accommodation requirements.

“People need to get vaccinated and we are going to lean hard into anything that can reinforce that policy,” Lastoe said. Before long, he added, N.Y.C. Runs may allow only vaccinated runners to enter races. He said he had no plans to indulge what he views as bad behavior for long.

Plescia said he was of two minds about that kind of policy, even though enforcement could be dicey, given that there isn’t a nationwide database of the vaccinated. (New York State does have a verification system called Excelsior Pass, which could come in handy for Lastoe.)

On the one hand, Plescia wants everyone vaccinated as quickly as possible. On the other hand, mandates sometimes push people in the other direction and give momentum to the antivaccination movement. “And that is something you do not want to do,” he said.

And yet colleges and universities, including many state schools, are requiring a vaccine and are prepared to deal with the consequences.

Will running races be far behind? Should they be? Let us know what you think.

We’re trying out a new section introducing you to a runner you should know. They may have a great story, a great time or lived a great life. Email us at runningnewsletter@nytimes.com with your feedback.

Another Runner in the Crowd 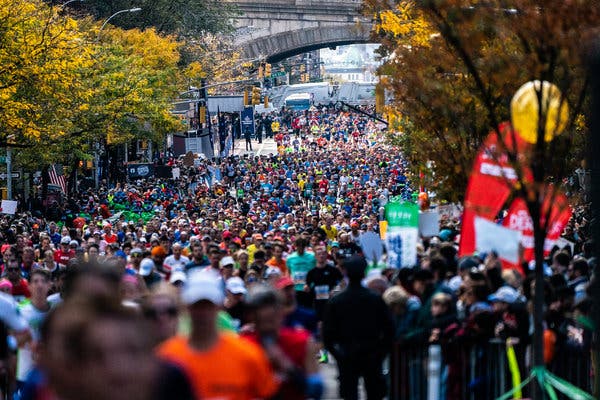 “When you don’t know where to begin, start with what you know.”

That was how Danny Woodward began the Facebook post that changed everything, so that’s how I’ll start, too. With what I know. Danny had blue eyes, big feet and when he laughed hard his shoulders heaved and his head would bounce. He loved baseball. He worshiped his wife. He adored his dogs. Sometime after I moved to New York in 2005, he trimmed down a bit and really started to run — 5Ks, 10Ks, half-marathons, the full 26.2 — and run fast. Breaking the 3-hour marathon barrier fast; 5-minute-mile fast.

And, wow, could he write.

This I know not because I’ve listened to his award-winning speeches or because I recall the stories from his time as a sports reporter around the Dallas area, where we met playing pickup basketball back in 2004.

No, the proof was in the essays he wrote over the past eight months, starting with that post, from last Sept. 13, that changed everything. He had brain cancer. Stage 3. Had it for a year, most likely longer. Probably even crossed the finish line on Boylston, in April 2019, with it, those insidious star-shaped cells multiplying inside him.

The essays read like diary entries, glimpses into the mind of someone striving to stay positive, fueled by peace and optimism, while facing what was a grim outlook. Told the average life span for someone with his type of cancer was 16 months, he wrote, “Sixteen months is nebulous when you don’t know where the starting line is and you don’t want to know where the finish line is.”

Danny died on Tuesday. He was 43. He didn’t know how much time he had left, but with what time he did, Danny kept running. He kept loving. He kept living. Godspeed, pal.

Dr. Anthony S. Fauci, runner, has some advice for you.

“Take care of yourself, get some reasonable sleep, don’t get overcome by stress, a good diet,” said Dr. Fauci, who turned 80 in December. “Enjoy life, but don’t do things in excess. Exercise is really important. I think that the fact that I’ve been a marathon and 10K runner for the last multiple decades has been very important in my staying fit, looking fit and feeling fit.”

Jane E. Brody, The Times’s longtime Personal Health columnist, talked to Dr. Fauci about life as octogenarians and beyond. Listen to their conversation here.

Serena Williams Wins in the First Round at the French Open