Gerrit Cole shook off rare control problems to pitch four-hit ball over seven innings and give the Yankees their most dominant stretch of starting pitching in 89 years, leading his team over the Chicago White Sox, 7-0, Saturday for a five-game winning streak.

Cole (6-2) allowed four singles, struck out seven and walked as many as three for the first time since Aug. 31. Rebounding from his worst outing this season, he lowered his E.R.A. to 1.81 and ended the day with a 100.8 mile-per-hour fastball that Andrew Vaughn took for a called third strike, Cole’s fastest pitch this season and the fourth-fastest of his big league career.

Cole extended the scoreless streak by Yankees starters to 30 innings.

Following Corey Kluber’s no-hitter at Texas and outings by Domingo German and Jordan Montgomery, Cole gave the Yankees four straight starts of seven shutout innings for the first time since May 11 to 16, 1932 (Johnny Allen vs. the St. Louis Browns, George Pipgras and Red Ruffing vs. Chicago and Lefty Gomez vs. Cleveland).

“It’s a lot of fun to play behind guys when they’re throwing the ball they way they have in the last few days,” New York center fielder Brett Gardner said.

Cole’s lack of control was unusual. He walked five in 57 ⅔ innings coming in and had a record streak of 61 strikeouts between walks. Cole issued three walks for the second time since signing a $324 million, nine-year contract before the 2020 season.

“I think maybe a couple of calls that he didn’t get up in the strike zone,” Boone said. “But I think he made adjustments, coupled with, in that first inning or two, he was finding his delivery and finding his timing and everything, but he really settled in and made some I thought some subtle adjustments throughout that outing.”

Cole has 92 strikeouts, the most by for the Yankees through 10 starts.

“I thought we had some good pitch selection early, even though I wasn’t quite as sharp as I wanted to be,” Cole said. “I made some pitches in some good spots to get ground balls, and I think we just settled in, a little more concise, efficient with the delivery.”

Justin Wilson and Luis Cessa finished the five-hitter. The Yankees lead the major leagues in shutouts and have eight in the first 46 games for the fourth time after 1958 (nine), 1955 (eight) and 1910 (nine).

The Yankees have outscored opponents by 13-1 in the last four games and clinched its seventh straight series win, moving a season-high eight games over .500 at 27-19. The five-game winning streak matched the Yankees’ season-high and made them 22-9 since a 5-10 start.

Before a season-high crowd of 14,665 on an 86-day afternoon as pandemic restrictions were eased, Gleyber Torres followed Friday night’s walk-off hit with three hits and four R.B.I., including a two-run double. He has raised his average to a season-high .268 from .182 before play on April 21.

“When he’s getting a pitch, he’s putting it in play now with authority,” Boone said of Torres. 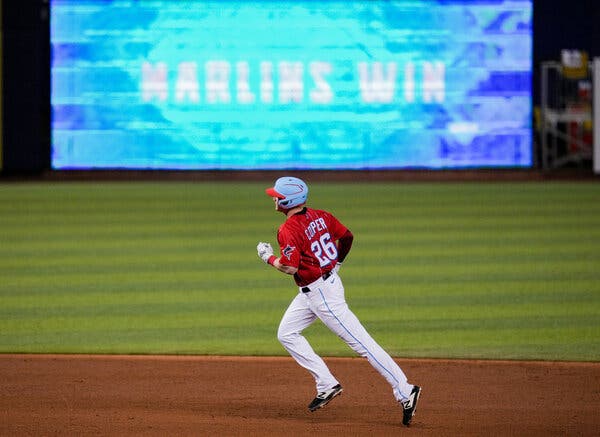 Garrett Cooper’s two-run homer in the ninth inning gave the Marlins a win over the Mets.Credit…Mark Brown/Getty Images

With their bullpen depleted, the Marlins were one strike from a second consecutive extra-inning game when Cooper hit a two-run homer to beat the Mets, 3-1.

Cooper’s homer came with two out in the ninth on a 3-2 pitch from Drew Smith (1-1), giving the Marlins a bounce-back victory after they used 10 pitchers in a 12-inning loss to the Mets on Friday.

Mets center fielder Johneshwy Fargas made a leaping snow-cone catch to rob Jesus Aguilar of an extra-base hit to start the ninth. Brian Anderson singled with two outs, and Cooper homered on a 90-m.p.h. cutter down the middle.

The Mets’ Dominic Smith tied the game at 1-1 with a two-out, R.B.I. single in the eighth. Richard Bleier thought he had Smith struck out with the previous pitch and took several steps toward the dugout assuming the inning was over.

Anderson scored the Marlins’ first run from third on a sacrifice fly in the seventh when catcher Tomas Nido dropped the ball making the tag.

Miami’s Pablo Lopez allowed four hits in seven scoreless innings and struck out eight. He knew the team needed for him to go deep into the game.

“Today more than usual, that was my main focus — I wanted to be efficient and effective early, and get myself in good counts,” Lopez said.

Kazmir Does Well in Return to Majors

Scott Kazmir did not know he would be making his return to the majors until Friday night.Credit…Darren Yamashita/USA Today Sports, via Reuters

The Giants called up the 37-year-old Kazmir from Triple-A Sacramento to make his first big league appearance since 2016, when he went 10-6 with a 4.56 E.R.A. over 26 starts for the Los Angeles Dodgers, who just so happened to be his opponent Saturday at Oracle Park.

“It was actually pretty gratifying to be able to deliver that to him and actually through the phone I could tell that he was smiling,” said Kapler, who played with Kazmir for Tampa Bay in 2009.

Kazmir quickly surrendered a two-out splash homer to Max Muncy in the first inning — the ball into McCovey Cove beyond right field traveled an estimated 423 feet with an exit velocity of 108.2 m.p.h.

Kazmir pitched four innings, allowing only one run and two hits. He walked none, struck out two and exited after 55 pitches against the World Series champions.

“It’s been a long journey for him and really kind of proud,” Kapler said before the game. “He and I were teammates a long time ago and I know that the journey hasn’t been the easiest one for him. It’s a pretty cool story.”

Highly touted when he was drafted in the first round by the Mets in 2002 out of high school in Houston, Kazmir is now with his seventh major league club in 13 years.

“It’s a fantastic story, it’s a story of perseverance and one of resilience,” Kapler said. “It’s a testament to his drive and his determination and his willingness to kind of go through some difficult stretches. It’s not easy to be an established major league pitcher with a long career, a lot of service time, made a ton of money and then go back to independent ball to try to get another shot.”

2021 French Open: What to Watch on Friday