The Islanders arrived at Nassau Coliseum on Wednesday with the opportunity to clinch a playoff series victory at their original home for the first time since 1993.

A raucous home crowd — with arena capacity increased to 9,000 for Game 6 from 6,800 earlier in the series — was an added bonus and the Islanders did not disappoint them.

A seesaw game tilted the Islanders’ way midway through the second period when Brock Nelson and Ryan Pulock scored 13 seconds apart, giving the Islanders a one-goal lead over the Pittsburgh Penguins. Nelson scored again three minutes later to cement a 5-3 win. The fourth-seeded Islanders upset the East Division-winning Penguins, closing out the first-round series with three consecutive wins. The Islanders will continue their playoff run against the Boston Bruins in their final season at the Coliseum.

The rookie netminder Ilya Sorokin — who won all four games he started in his first playoff series — made 34 saves for the clinching win. He stopped 27 of the 28 shots he faced in the final two periods, including a denial of Evgeni Malkin on a breakaway. The stop spawned cascading chants of “Ilya, Ilya” from the Coliseum crowd and encapsulated the series: Penguins frustration and composed Islanders execution.

“The crowd was rowdy — they were loud,” Nelson said. “They gave us a boost. We wanted to win that one in front of them.”

Josh Bailey’s Game 5 double-overtime winner on Monday in Pittsburgh had inspired the fans, as the chance to advance was at their trembling fingertips. The team hadn’t clinched a series on Long Island since a six-game victory over the Washington Capitals in April 1993, though it did win a series in 2016 while playing at Barclays Center in Brooklyn.

Each team scored twice in the first period. Penguins center Jeff Carter notched his fourth goal of the series just 1 minute 27 seconds into the contest before Anthony Beauvillier sent the crowd into a frenzy at 5:16 when he knocked the puck past Penguins goaltender Tristan Jarry.

Jake Guentzel put the visitors ahead at 11:12 with a power-play goal while Islanders defenseman Scott Mayfield was in the penalty box for crosschecking Malkin.

But Kyle Palmieri, one of the Islanders’ late-season acquisitions from the Devils, tapped a rebound past Jarry at 12:25, tying the score again and claiming his third goal of the series.

Travis Zajac, also acquired from the Devils, made his series debut, replacing Oliver Wahlstrom, who was injured in Game 5. Zajac and Jean-Gabriel Pageau, who had two points, assisted on Pulock’s go-ahead goal. 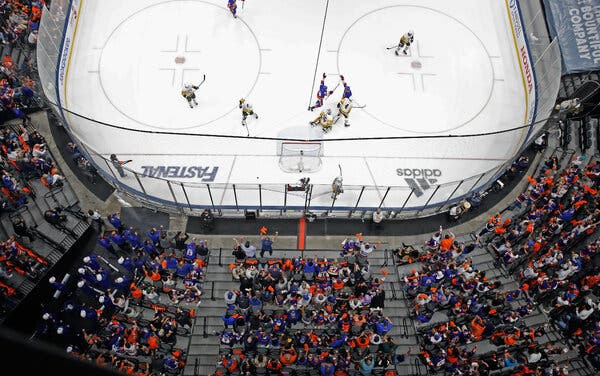 The maximum allowable capacity for Game 6 was increased to 9,000 from 6,800 earlier in the series.Credit…Bruce Bennett/Getty Images

The Penguins started the third period on a power play after a disputed call against Pulock late in the second. But the Penguins captain Sidney Crosby’s shot off the post was as close as Pittsburgh got.

The Islanders entered the contest with history on their side.

They came in with an 11-1 record in Game 6s when they were leading a series by three games to two. And they were 7-2 in playoff games against Pittsburgh under Coach Barry Trotz, including a 3-1 mark at Nassau Coliseum.

Fans are relishing one last chance for playoff games at their intimate home rink, which opened in 1972. The team will move into its state-of-the-art home at Belmont Park next season, but that can wait as the franchise chases its first title since a run of four straight championships from 1980 to 1983.

“This is just one step,” Nelson said. “We want to make some history of our own here at the Coli.”

She Galloped Into History, and Then Oblivion