On Monday, Baseball Reference, the go-to source on the internet for such matters, would have told you that Stan Musial led the major leagues with a .357 batting average in 1943. It also would have said numerous pitchers took a turn leading the majors in strikeouts per nine innings between 1927 and 1945, and that the top three batters in career adjusted on-base-plus-slugging percentage were Babe Ruth, Ted Williams and Barry Bonds.

A day later, all of that looks much different. Now, Josh Gibson of the Homestead Grays has surpassed Musial with a .466 average in 1943. Satchel Paige, a dominant pitcher for more than 20 seasons, has taken over eight of those strikeouts per nine innings titles. And Oscar Charleston, perhaps the finest all-around player in Negro leagues history, has bumped Bonds for the third best career mark in adjusted O.P.S.

“A lot of new books on baseball trivia will be coming out in the next few years,” Sean Forman, the founder and president of Sports Reference, joked on a video call ahead of his baseball site’s announcement on Tuesday that it had dramatically changed and expanded its accounting of the Negro leagues. The move comes ahead of Major League Baseball’s own plans to incorporate the statistics into their historical record, which could happen this coming off-season.

The reason for Baseball Reference’s adjustment dates back to August, when Forman said he read an article about how players from the Negro leagues remained uncounted among the official major leagues and that Major League Baseball was considering formally recognizing several of those leagues as on par with its American and National leagues.

Until 1947, Black players had been excluded from the major leagues. And long after Jackie Robinson broke the color barrier, the accomplishments of most Black players remained overlooked. A committee of five white men in 1969 granted major league status to four defunct organizations, but chose not to include the Negro leagues, an omission M.L.B. called “clearly an error” in December when it announced it was finally redressing that past racial wrong and bestowing “long overdue recognition” to more than 3,400 payers from seven distinct Negro leagues that operated between 1920 and 1948.

Baseball Reference has long featured statistics from the Negro leagues, but they weren’t comprehensive, the numbers weren’t included in such features as the major league leader boards or advanced search tool, and the players’ pages looked different from those of other major leaguers. 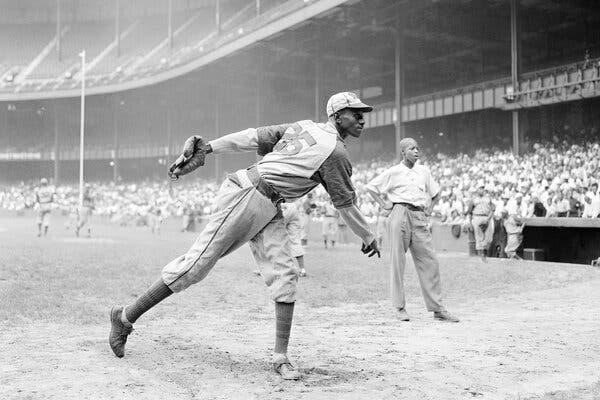 Satchel Paige was a dominant force for the Kansas City Monarchs, and several other Negro league teams, from 1927 to 1947. A recent change to Baseball Reference will show his statistics from those years alongside the ones he produced in six partial American League seasons.Credit…Matty Zimmerman/Associated Press

Forman said Sports Reference began talking to the people at Seamheads last summer about potentially licensing their extensive Negro leagues database. But doing so, and elevating those leagues on his site, didn’t crystallize until after Forman read Ben Lindbergh’s article in the Ringer.

“It just hadn’t occurred to me and I’m somewhat ashamed to say,” Forman said.

Soon, Forman and his team embarked on the largest project Sports Reference had ever undertaken, with half of the company’s staff dedicating the past four months to beefing up its representation of the Negro leagues. The company sought input from the families of Negro leagues players and researchers, and commissioned articles from them and sought interviews for a new podcast.

Although the Elias Sports Bureau is the official keeper of M.L.B.’s statistics and has been researching how best to incorporate Negro leagues statistics given the scattered nature of the various leagues and inconsistent record keeping, Baseball Reference’s efforts, while unofficial, were significant because the site is perhaps the most accessible and widely used baseball almanac, visited by fans, players and front office executives alike.

“As baseball reinvents itself, every fan should welcome this statistical reconstitution towards social reparation,” said Larry Lester, the co-founder of the Negro Leagues Baseball Museum in Kansas City and the chairman of the Society for American Baseball Research’s Negro Leagues Committee, in a video call.

“The beauty of these stats is that they now humanize these folk heroes, and they’re no longer mythical figures like Paul Bunyan or the steel-driving John Henry. These stats legitimize their accomplishments.”

Lester said M.L.B.’s announcement in December was bittersweet because it was a long journey for him and other researchers to reach this point and because it came on the heels of what he called the country’s awakening to social concerns such as police brutality and systemic racism. Adding the accomplishments of Negro league players to Baseball Reference, he said, was an opportunity for America to learn more about its history.

“Many of the websites need to be updated to include the greatness of the Negro league players,” he said. “You’re going to discover great home run hitters besides Josh Gibson.”

The major league leaderboards, however, won’t change drastically on Tuesday because of several complicating factors and inherent inequalities. First and foremost, Lester said, the Negro leagues played between 50 and 70 games a season — less than half as many as the other major leagues — and thus players from those leagues didn’t have the same opportunities.

That is why, Lester said, rate statistics like at-bats per home run or strikeouts per nine innings are better ways to show the talent of players like Gibson and Paige.

Gibson was a power-hitting catcher whose Hall of Fame plaque says he “hit almost 800 home runs in league and independent baseball” but, as of Tuesday, only 165 were accounted for on Baseball Reference.

Other obstacles with the Negro leagues statistics: players often took part in games outside of league play, such as barnstorming exhibitions — some of which were played against players from the American and National leagues — and there are gaps in the documentation. While Lester estimated that researchers have statistics from at least 90 percent of the Negro leagues games from the 1920s and 1940s, they have approximately 60 to 75 percent of the games during the 1930s, with gaps caused by the Great Depression.

One frustrating example for Lester is the belief, supported by at least three newspaper accounts, that Gibson achieved the rare feat of hitting four home runs in a game. The game is believed to have been played in Zanesville, Ohio in1938, but Lester has been unable to locate a complete box score so that it — and the entire game — can be officially counted.

Game-by-game data from the Negro leagues is not currently available on Baseball Reference, but Forman said he hoped to expand the site’s offerings as more research is unearthed, including by other organizations such as Retrosheet, a website which has documented the box scores of nearly all of the games in American and National league history.

“We hope that our publication of these initial stats will spark more research, and as the research is done, the accuracy and completeness of what we present on the site will increase,” said Forman, who cautioned that players’ totals may change, such as Gibson’s 1943 batting average, which, barring significant new findings, will eventually unseat Hugh Duffy’s mark of .440 in 1894 as the official major league record.

When M.L.B. made its Negro league announcement over the winter, Gibson’s great-grandson, Sean, said there were many unanswered questions about how recognition would take place. He said being included in this way on Baseball Reference was one example of how the change matters. He imagined how excited one of the few living Negro league players, former outfielder Ron Teasley, 94, might feel when he sees his page listed among the major leaguers online. Gibson also wondered if the change could bolster the Hall of Fame case for players like Rap Dixon, a star outfielder in the 1920s and 1930s.

For his own family, Sean Gibson said he was excited to see how his great-grandfather’s accomplishments rank in major league history. On Tuesday, the top of Josh Gibson’s Baseball Reference page had a several new additions: two-time Triple Crown winner, 12-time All-Star, two-time World Series winner and three-time batting champion.