“We’ve been picking things up for a couple weeks now, but it is still great to see this group go out and sweep a team like the Yankees,” Tigers Manager A.J. Hinch said. “That’s a massive momentum boost heading into a road trip.”

The Yankees (29-24) were outscored by 15-5 with 36 strikeouts during the series and went 1 for 25 with runners in scoring position. Shortstop Gleyber Torres had two errors and third baseman Gio Urshela one that contributed to a four-run third inning and a 6-0 lead for Detroit (22-31).

“This was just a bad ending to a terrible weekend, and we got to get better,” Yankees Manager Aaron Boone.

Gary Sanchez made a baserunning blunder as the Yankees tried to rally in the eighth, stopping and jogging part of the way to second, then speeding up and getting thrown out.

“You’ve got to be aware of kind of the ballpark and surroundings,” Boone said. “Yeah, that’s a mental error.”

Michael King allowed four runs — two earned — three hits and two walks in two and a third innings in an erratic audition to replace injured Corey Kluber in the rotation that was no better than Deivi Garcia’s on Saturday.

The Yankees loaded the bases with two out in the ninth, but Michael Fulmer struck out Aaron Judge, the 12th strikeout by Tigers pitching.

“I know Fulmer’s got good fastball, hard slider, kind of just looks like the fastball,” Judge said. “Couple sliders took off on me and made some bad decisions, didn’t swing at the ones hanging up the at the top of the zone.”

Detroit had not swept a three-game home series from the Yankees since May 12-14, 2000, its first season at Comerica Park.

“What we’ve been putting out there right now is not our best, and it’s unacceptable,” Judge said.

Before the game, Boone said Triple-A first baseman Chris Gittens was “on our radar.”

“In my last few starts, I’ve been getting sharper as the game went on,” he said. “I’ve been trying to work on getting into that kind of rhythm right from the start instead of taking a few innings.”

Yet Another Postponement for Mets 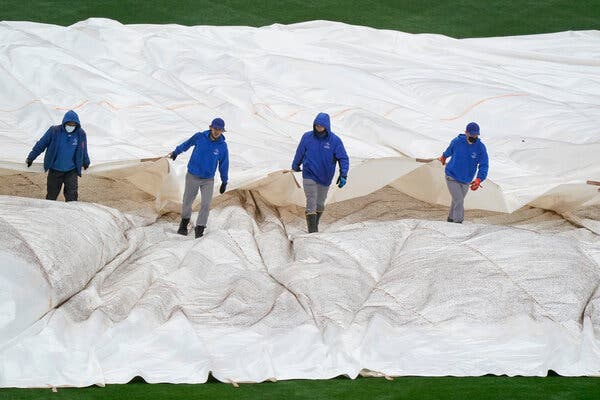 Mets groundskeepers put a tarp over the outfield at Citi Field on Sunday. The Mets’ game against Atlanta was postponed.Credit…Kathy Willens/Associated Press

Rainouts have become routine for the Mets.

The series finale between the Mets and Atlanta Braves scheduled for Sunday night at Citi Field was postponed because of more wet weather in New York.

The teams will make it up as part of a single-admission doubleheader on July 26 beginning at 5:10 p.m. Both games will be set for seven innings.

It was the second washout of the series and third in five days for the N.L. East-leading Mets in a season filled with interruptions from the very beginning.

Two-time Cy Young Award winner Jacob deGrom (3-2, 0.80 E.R.A.) had been slated to pitch for the Mets against Max Fried (2-2, 4.63) in a nationally televised game on ESPN. But with rain falling throughout an unseasonably chilly afternoon in Queens and a forecast of showers deep into the night, the game was called a little more than 90 minutes before the scheduled first pitch.

The teams were also rained out Friday night. That game will be made up in a single-admission doubleheader on June 21 starting at 5:10 p.m., also with seven-inning games.

The Mets won by 13-2 on Saturday night, the only game of the scheduled three-game series that was played.

The depleted Mets (25-20) begin a nine-game road trip Monday night at Arizona, which ended a 13-game losing streak Sunday with a 9-2 win over St. Louis.

The Mets have played four fewer games than any other major league team. They have had seven games postponed by bad weather, plus the suspension against the Marlins. Even the first scheduled series of the season was wiped out in Washington because of Covid-19 issues for the Nationals.