PHILADELPHIA — Aaron Nola allowed three hits and struck out nine, leading Philadelphia over the Yankees, 7-0, Sunday for a two-game sweep that moved the Phillies back over .500.

Odubel Herrera, Jean Segura and J.T. Realmuto combined to go 7 for 13 with a double, a triple, four runs scored and five R.B.I. Philadelphia has won four straight games and three straight series during a 6-1 homestand, giving the Phillies a winning record for the first time since they were 22-21 before play on May 20.

“We have a team that can be an all-around, really good team,” said Andrew McCutchen, who was 2 for 3 with a run and two R.B.I. “We can hit, we can pitch and we can field. We can be that type of team.”

Domingo German (4-4) fell behind by 4-0 by the second inning, a day after Jameson Taillon trailed by 4-0 in the first.

When asked if he felt there was anyone who was getting used to or accepting the team’s struggles, Boone bristled when answering no. “I know them too well and I don’t think there’s any getting used to losing,” Boone said. “Get out of here with that.”

The Yankees grounded into their major league-high 64th double play. Rougned Odor was caught off second base on Gleyber Torres’ seventh-inning grounder to shortstop, the Yankees 31st runner out on the bases this season. No other team started the day with more than 23.

“We’re grinding over this as much as we can in conversations postgame,” Boone said. “We’ve addressed some things and changed along the way, and we’re going to keep doing that.”

Nola walked one, throwing 103 pitches in seven and two-thirds innings while possessing sharper fastball command than he exhibited recently.

“I always have my confidence,” Nola said. “I just had some things not going my way. It was frustrating not getting out fifth inning three of the last four. To myself, that’s not what I usually do. I want to go deep into games and put my team in a position to win. Not having the command that I’m used to having is frustrating. But it doesn’t keep me from keep working on in throwing sessions and bullpen sessions. And I always go into the next game with confidence.”

The Yankees, missing Aaron Judge because of back spasms, finished with four hits against Nola, relievers Connor Brogdon and Enyel De Los Santos. 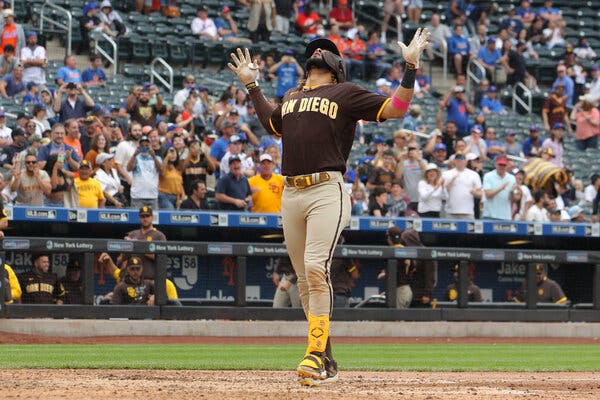 Fernando Tatis Jr. made his presence known with a grand slam in the seventh inning on Sunday.Credit…Brad Penner/USA Today Sports, via Reuters

Starving for a clutch hit, the San Diego Padres got two in a row from precisely the guys you’d expect.

Tatis hit a tiebreaking grand slam in the seventh inning and Machado followed with a home run as San Diego’s high-priced superstars powered the Padres past the Mets, 7-3, on Sunday to stop a four-game slide.

“There were a lot of big moments,” Manager Jayce Tingler said. “Obviously we’ve been fighting, scrapping, clawing and struggling at the same time.”

“One of his best starts. He was really efficient with his pitches,” Tingler said.

Shut down by the Mets’ stingy staff in the first two games of the series and struggling mightily with runners in scoring position lately, the Padres finally broke through against the Mets’ bullpen.

San Diego drew three walks in the seventh from a tiring Jeurys Familia (2-1), who had pinch-hitter Jurickson Profar down 1-2 before losing him with two outs. Familia then walked Pham on four straight balls, forcing in the tying run, and was pulled after throwing 41 pitches over one and two-thirds innings.

“He’s gotten a lot of big outs in his career. We felt like he could come out of there,” said Mets Manager Luis Rojas, who was operating short-handed down several relievers in a taxed bullpen, plus two players on the bench who were unavailable. “It was a tough one.”

Jacob Barnes wanted a borderline 1-1 pitch to Tatis but didn’t get it, and the $341 million slugger sent the next one a projected 444 feet to left field for his third career slam and second this season.

“It was huge. It was a great inning from the entire offense,” Tatis said.

It was the 19th homer of the year in 49 games for the 22-year-old Tatis, who also went deep in a 4-1 loss Saturday. He began the day tied with Atlanta outfielder Ronald Acuña Jr. for the National League lead.

Tatis matched Harmon Killebrew in 1959 and Cody Bellinger in 2017 for the most home runs in the first 49 games by a player 22 or younger.

“He’s an unbelievable player. He’s got all the tools,” Rojas said. “He showed everything, right? This kid can beat you in different ways. Special player.”

Phil Mickelson Muscles His Way Up the P.G.A. Championship Leaderboard