Expected to contend for division and World Series titles, the Yankees have been maddeningly inconsistent this season, from their winning to their offense to their pitching. But in at least one unusual feat, turning triple plays, they have excelled, and their latest iteration, their third of the season, helped them secure a victory in dramatic fashion on Sunday at Yankee Stadium.

The Yankees were clinging to a 2-1 lead over the Oakland Athletics in the top of the ninth inning, but closer Aroldis Chapman was in a bind with no outs. He threw just one strike to Jed Lowrie and Tony Kemp combined, walking both batters. Up came catcher Sean Murphy, and Yankees Manager Aaron Boone had two relievers warming in the bullpen.

After a mound visit from Boone and a trainer about a problem with a nail on his throwing hand, his left, Chapman conferred quickly with his catcher, Gary Sanchez. He simply wanted Chapman, a high strikeout pitcher, to find the strike zone against Murphy, then fan him then get a double play to get out of the jam.

“But things turned out better than I thought,” Sanchez said after the game.

Chapman missed with his first pitch to Murphy. But his next offering, a 98-mile-per-hour fastball low and inside, started the chain of events that had Yankees players shouting and grinning in disbelief. Murphy drove that pitch into the ground and down the third-base line, almost right at Gio Urshela, the Yankees’ sure-handed third baseman.

“It was the perfect ground ball for a triple play,” Sanchez said. Boone added: “Usually a triple play sneaks up on you. Right away, I’m thinking that’s a triple play.”

Urshela scooped up the ball, took one step to his right, simultaneously tagging third base and throwing to D.J. LeMahieu at second base for the second out. LeMahieu completed the triple play by firing the ball to first baseman Chris Gittens, the throw beating Murphy by a step. According to the YES Network, it was the first game-ending triple play in the major leagues since 2009, when the Phillies turned one against the Mets.

“It was something incredible,” Chapman said. “When you say it, you almost don’t believe it.”

Gittens pumped his fist and smacked hands with Urshela, whose mouth was agape. With their arms around each other, Chapman smiled and laughed with Sanchez, who drove in both of the Yankees’ runs with a double in the sixth inning. It was the second time this season that Chapman, mostly dominant this year, had been on the lucky end of a triple play.

Against the Chicago White Sox on May 21, he also escaped a ninth-inning jam with no outs and two men on base. It was another 5-4-3 triple play started by Urshela that also took advantage of a perfectly placed ground ball and the lack of speed of some of the runners on base.

Before this year, the Yankees hadn’t pulled off a triple play since April 17, 2014. In the span of a month, they have now done it three times. And by winning the series against the 44-29 Athletics, the Yankees improved to 38-33. 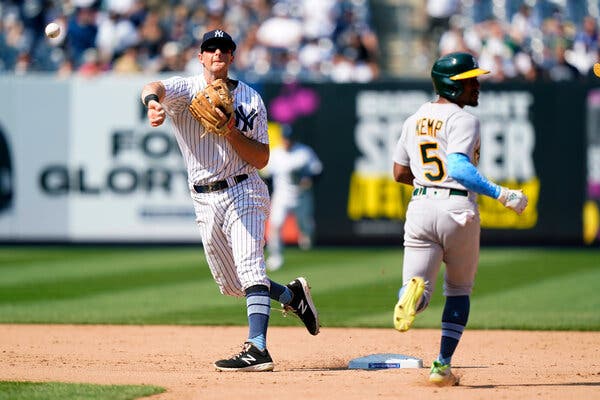 Yankees second baseman D.J. LeMahieu forced out Tony Kemp for the second out, then threw to first for the triple play on Sunday.Credit…Kathy Willens/Associated Press

‘Here We Are, Again’: The Giants Stick to a Formula That...