In a sport whose most famous athletes often are white and usually hail from the world’s most impressive mountain ranges, Zeb Powell, a Black Southerner, is one of snowboarding’s fastest rising and most recognizable talents.

It is a status that Powell, 21, is hoping to use to inspire a new generation of snowboarders who may not yet see themselves in the sport.

“As of now, I’m kind of the face of Black snowboarding, which is crazy to think,” Powell, who was born in North Carolina, said from his home in Vermont, where he spent much of this winter sidelined with a torn meniscus. The injury forced him to miss this year’s X Games, the event at which he won a gold medal in 2020, his rookie season.

It was a bummer to miss the competition, Powell said, but he has long known the power of representation on slopes and on screens. As his online influence grows — even outside the winter months — so too does his ability to reach young athletes who do not see themselves in snow sports.

He can trace his rapid rise to a single trick he performed in the snowboard Knuckle Huck competition at the 2020 X Games. In Knuckle Huck, riders launch themselves into creative tricks from the knuckle, or front edge, of a man-made jump.

On his first run of the night, Powell performed a “coffin to method back flip,” sending the commentators, the crowd and snowboarders watching around the world into a frenzy.

It was a trick Powell partially invented. In the instant before he reached the edge of the jump, he lay on his back, then launched into a full back flip with board grab from a supine position.

He not only took home a gold medal, but he also doubled his social media followers overnight.

The hardware and the newfound following were both wins in his book. Though he enjoys competing, he has always seen those events as a necessary function to build and grow his visibility as an athlete. He is part of a generation of athletes who find being a social media influencer as gratifying as being a competitor — and sometimes as lucrative as being one.

“After X Games, I started having all these people reach out to me, saying what an inspiration I am,” Powell said. “I wasn’t looking for this, but now it’s there, so I wonder what I can do with it.”

With his knee on the mend, Powell’s attention remains trained on filming, expanding his reach through social media and being the face of, and for, young Black snowboarders. It has kept him busy during his injury and the pandemic.

This off-season, he will be coaching at the High Cascade snowboard camp in Mt. Hood, Ore. He hopes to spend more time mentoring, with an eye on organizations like Hoods to Woods and the Chill Foundation, which introduce board sports to underserved youth.

Powell’s influence in snowboarding, and his growing collection of sponsors and accolades, is a far cry from where he started, in the tiny town of Waynesville, N.C., on a skateboard.

He learned to snowboard on the wrong foot. A snowboard instructor at his nearest ski resort, Cataloochee Ski Area in Maggie Valley, N.C., had 7-year-old Powell try to ride in a regular stance, with his left foot at the front of the board. He quickly realized he was a so-called goofy foot rider, and switched to the right-foot-forward stance. 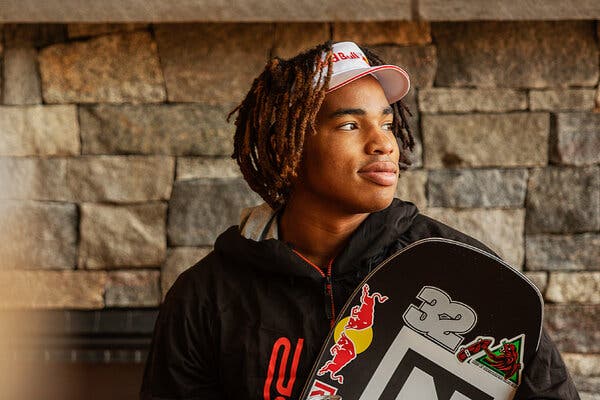 Powell’s rise in snowboarding is a far cry from where he started: on a skateboard in Waynesville, N.C.Credit… Brian Nevins/Red Bull Content Pool

“I always liked flying through the air,” Powell said, calling himself the guinea pig of his friend group. “So my friends would always make me try these tricks, and I would just land them.”

He took the tricks he learned as a skateboarder and translated them to the snow, quickly outgrowing his home turf. His parents soon sent him to Woodward Copper snowboard camp in Colorado, where his talents were recognized by one of his coaches, Chad Otterstrom.

“You just never knew what he was going to do, and he’d always land on his feet,” Otterstrom, a professional snowboarder, said. He encouraged Powell to enroll in Stratton Mountain School in Vermont, a private high school with a focus on competitive winter sports.

Once again, just as on the slopes of Copper Mountain and at Cataloochee, Powell was one of the few nonwhite athletes.

While he never felt “othered” as a Black athlete in a predominantly white sport, he said, his ability to perform at an extremely high level has been a buffer for him.

“It was mainly all-white,” Powell’s mother, Val, a kindergarten teacher, said from the family’s home in Waynesville. “And there were a lot of families who had a second mountain home at the resort, too.”

Though she remembered everyone at the school being welcoming, putting a 13-year-old in a school that cost upward of $60,000 a year was a strain on the family.

“We really didn’t have the money to send him to snowboard school,” she said. “We have four other kids. We had two other kids in college then.”

Recognizing the young rider’s talent, Stratton’s administrators offered to put Powell on scholarship. He prospered — turning what he missed out on in vertical drops and fully appointed terrain parks in his early years into his biggest advantage.

“Anyplace I could get air or do a trick off at Cataloochee, I would take advantage of that,” Powell said. “So when you put me on a real mountain that has jumps and transitions, I thrive, because I learned how to do these tricks without having those resources.”

By his senior year, he had multiple sponsorship deals and traveled the country for events, films and social media reels.

The size of his home mountain shaped Powell into a snowboarder perfectly suited for Knuckle Huck. It may be the closest thing to what is practiced in terrain parks and on mountains by recreational snowboarders, and it is different from slopestyle, where riders fly down mountains while hitting a variety of manicured obstacles, and the halfpipe, which was brought to the mainstream by Shaun White in the 2006 Olympics.

As videos of Powell grinding down tree stumps or bombing into drainage pipes began to pop up online, his profile started to increase.

“My riding kind of caters to social media,” said Powell, whose ability to envision and execute a single creative trick rather than a long run made his style a perfect fit for TikTok and Instagram.

Powell plans to compete in future X Games. Should the Olympics ever include the Knuckle Huck, he would be interested in competing in the Winter Games as well. But, he said, he is unlikely to shift his focus to a current Olympic discipline, such as slopestyle or halfpipe, as doing so would require a drastic shift in training, time that could be spent filming.

“When I started snowboarding, I didn’t have any influences other than a few older snowboarders at our mountain,” Powell said. “But the more Black snowboarders there are in the sport, the more there will be.”

“I’m making an impact through filming,” he added, pointing to the young snowboarders that look up to him, that see themselves in his rise.

The PawSox Moved, but Pawtucket Has Yet to Move On